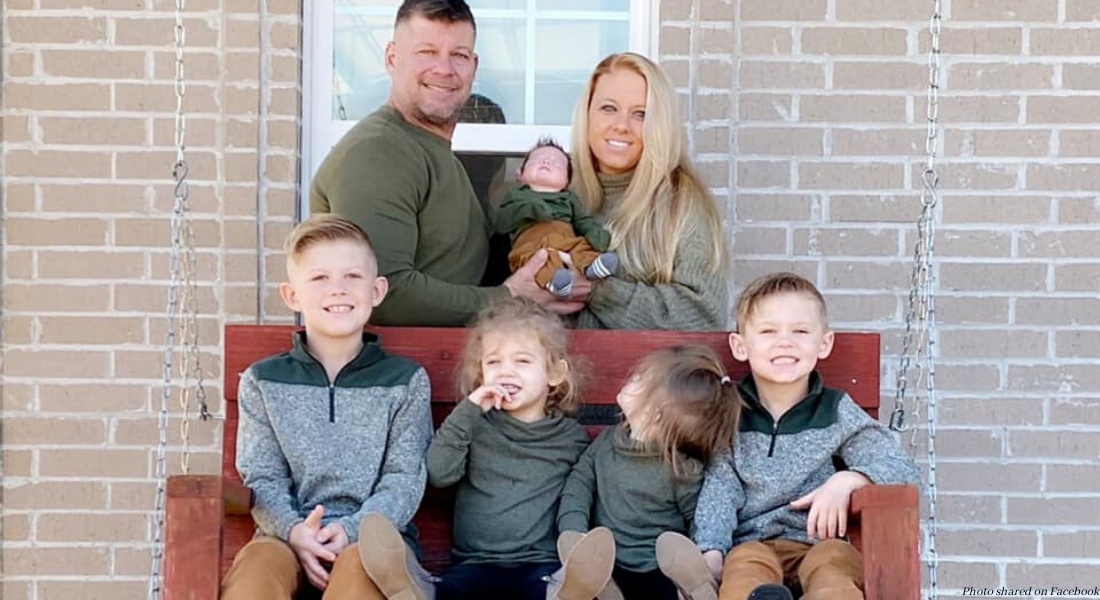 UPDATE, 01/10/2020: After the video of Rayce singing to Tripp, his baby brother with Down syndrome, went viral, country music stars Dan + Shay responded. The duo, who recorded the song, took to social media to thank the Powell family — and give them a surprise of their own, too!

“to the powell family: thank you for sharing such a sweet video of your sons rayce + tripp,” they wrote on Facebook. “it warmed our hearts to know that 10,000 Hours was the soundtrack to this wonderful moment. we want to invite your family to our show in little rock on september 17th, and we’d love the chance to meet you. it’s almost a year away, but just know that you’ll have tickets with your names on them waiting for you at the box office.”

ORIGINAL ARTICLE, 01/05/2020: The sweet bond of two brothers was on full display in a video that’s gone viral on Facebook. In it, a loving big brother cradled his newborn brother, who has Down syndrome, and sang Dan + Shay’s “10,000 Hours” to him. It’s yet another poignant reminder that love doesn’t count chromosomes.

The boys’ mother, Nicole Powell, posted the video in December. “This is how Rayce bonds with Tripp,” she wrote on Facebook. “He sings to him all the time. He swear this song is about him and his brother. He’s singing, ‘I’d spend 10,000 hours, and 10,000 more if that’s what it takes to learn that sweet heart of yours. I might never get there but I’m going to try if it’s 10,000 hours or the rest of my life, I’m going to love you.’ Love doesn’t count chromosomes, or as Rayce says, ‘Aren’t we all different?'”

In an interview with local news affiliate THV11, the Powells explained the difficult process of getting to the happy place they are now, with doctors saying Tripp would have a very poor quality of life. “They recommended we terminate the pregnancy, and I said absolutely not,” JJ Grieves, Tripp’s father, said. And he hopes that Rayce’s example will help other people learn to become more accepting. “He’s the same as the rest of us,” Grieves said. “He just takes a little longer to learn, a little more caring, a little bit more loving, but isn’t that what the world needs?”

READ: Her twin girls had Down syndrome, so doctors urged her to abort six times.

Rayce isn’t the only sibling who is showing love to their baby brother. “When we first learned about our son Tripp’s Down Syndrome diagnosis while I was pregnant we told our oldest boys Jayce and Rayce about it,” Powell wrote on Facebook. “Later that night I checked Jayces snap chat because I saw he uploaded a photo and I saw this. On his own he googled Down syndrome and made his own ‘ribbon’. I was only 6 months pregnant at the time so of course the tears flew. Then we had Tripp and Jayce told us, ‘I made him something during free time in class. I have it in my desk, ive been waiting until he was born to bring it to him.’ Again it was the same ribbon. So we knew we had to get him some stickers made for his bmx bike. I couldn’t have picked better big brothers for our sweet boy! (I know his big sisters will be just as amazing to him to!)”

While doctors frequently give worst-case scenarios for families expecting children with Down syndrome, the truth is, advances in science and medicine have meant that there has never been a better time to have a child with Down syndrome. People with Down syndrome are living longer, healthier, more independent lives than ever before, and virtually all of them report being happy with themselves and their lives. That positivity likewise affects their families, with parents and siblings alike overwhelmingly reporting that their family member with Down syndrome had a good effect on their lives.

People with Down syndrome are not burdens and they have potential. They do not deserve to be targeted for death simply because they are different.