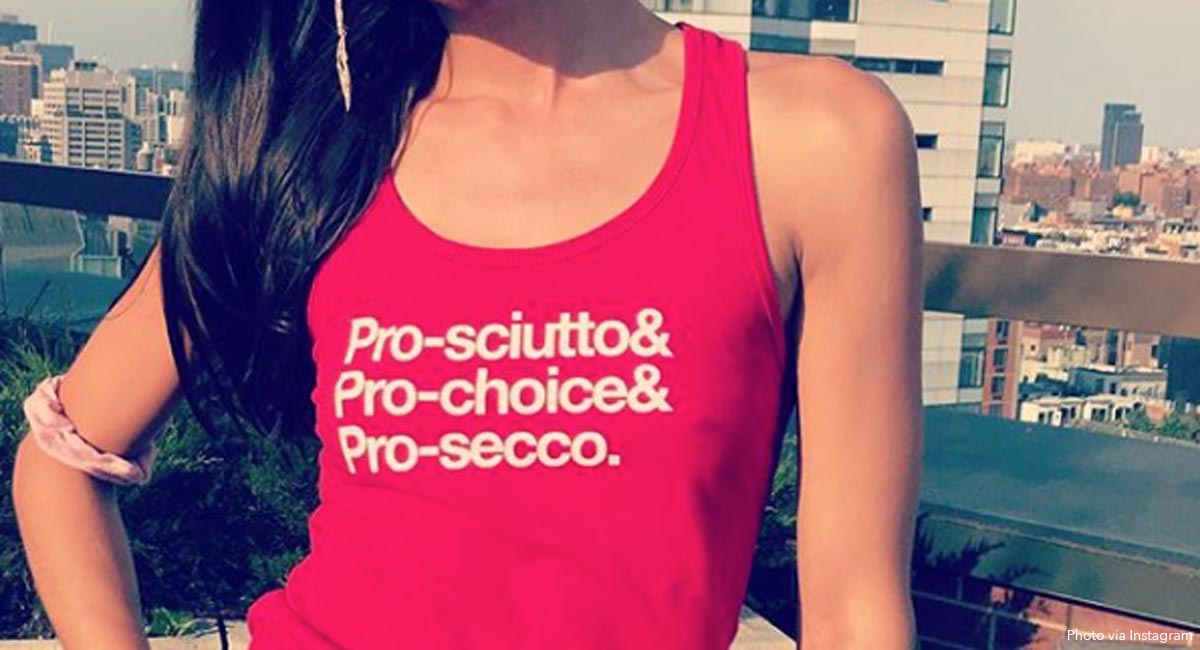 Pro-choice feminist producer and journalist Liz Plank recently modeled a tank top on Instagram with the words, “Pro-sciutto & Pro-choice & Pro-secco.” The shirt, designed by Madcao, raises money for NARAL Pro-Choice America, an organization Plank believes is helping to keep abortion “as uncontroversial as it should be.”

Thanks for the swag @prochoiceamerica ❤️! Get yours by following the link in my story all proceeds go to NARAL to keep abortion legal, safe and uncontroversial as it should be. (? @leelee061 ? @bonlook) #FemmeLibre

While the majority of Plank’s followers thought the tank was a brilliant fashion choice (the post had over 15K likes), some pro-choice vegans were offended by it. These followers were upset the message promoted the eating of meat, and therefore the killing of animals, which they find repulsive. One follower commented (apparently not knowing that her description of being pro-choice actually fits more in line with being pro-life):

eliseilaearth – Prosciutto is a dead animal…where was their choice? Don’t get me wrong, I am definitely pro-choice. But I’m pro-choice for all females, including animals. I believe as humans we have enough compassion in our hearts to extend our respect to all living beings, not just human beings. ?

[email protected] – As a vegan, why would you wear a shirt like this? I would think that as an activist, you would use your voice for animals as well. Aren’t there other pro-choice shirts that don’t mention a piece of animal flesh? Genuinely curious of your thought process when putting on this shirt.

While there are pro-choice shirts that don’t mention animal flesh, the act of abortion always involves human flesh being destroyed and discarded. That clearly isn’t an issue, though, to these pro-choice vegans, as another commenter wrote:

violetcassandra – I’m struggling trying to imagine a world where an animal imprisoned, tortured and then killed by the meat industry can do it for CHOICE.

My struggle is trying to understand why compassion shown to pigs isn’t given to preborn children. Even though Plank sported the ‘pro-meat’ shirt she is actually a vegan as well. The knowledge of that caused a follower to question the sincerity of her activism:

laverovegana – @feministabulous in fact, I’m curious as to why there isn’t ANY vegan activism on your feed if you’re a vegan. The deplorable animal agriculture industry also targets people of color, people of lower income brackets, minorities, undocumented immigrants and females of various species. Aren’t those the groups you try to protect? Advocating for vegan living coincides with your goals so why don’t you use your influence for that? Genuinely curious.

As a pro-life activist and someone familiar with the evil practices of the abortion industry, I find the comments from pro-choice vegans baffling. Their concerns that a profitable industry targets people of color and women, the lack of choice for the victim, and the compassionless destruction of life are the reasons I personally oppose the abortion industry.

A pro-life vegetarian was brave enough to enter the discussion on this post with her similar thoughts.

runningoncoffeeandlove – @[email protected] I clicked on this post strictly to read the comments to try to understand the commenters philosophy on pro-choice. I’m pro-life, but also have been a vegetarian for almost 20 years. As a mother to one, and pregnant with another, I’m honestly curious as to how reference to prosciutto can be so upsetting because it’s a dead animal that didn’t have a choice…..isn’t an aborted baby a dead human that didn’t have a choice?

As a pro-life vegan friend said on Facebook in response to this post, “I’m a pro-life vegan. My being vegan only serves to reinforce my pro-life stance and vice versa. I can’t imagine that being vegan and pro-choice wouldn’t lend itself to some major cognitive dissonance. That would be exhausting.”

It’s also exhausting trying to understand how pro-choice vegans can fight to protect animals while ignoring the violence of abortion towards babies. Thankfully, a growing community of pro-life vegans seeks to challenge that type of thinking. Check out their Facebook page at Vegan and Pro-Life.