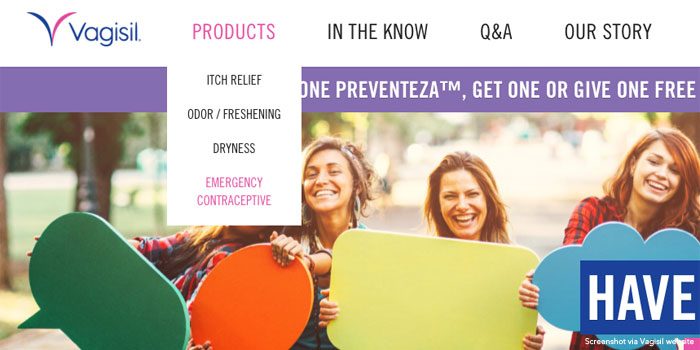 When you think of Vagisil, the first thing that probably comes to mind is “itch relief,” or something along those lines — not “emergency contraceptive.” And yet, that is exactly what Vagisil has added to its product line.

Vagisil’s new “products” tab on its website is a subtle deception. The vaginal care company recently introduced a new contraceptive — while conveniently leaving out the fact that it can act as an abortifacient, meaning it can expel an already-fertilized new human being. Preventeza actually contains the same ingredient as Plan B, also known as the morning after pill.

The main ingredient in Plan B and Preventeza is levonorgestrel, which is an exceptionally strong dose of a ‎Progestogen, or birth control. But it’s called a morning after pill for a reason: if a woman has unprotected sex and is fertile, taking the pill will also take the baby’s life if he or she has already been conceived. While hormonal birth control also may prevent the sperm from reaching an egg, the label is perfectly clear — a fertilized egg (more accurately known as a zygote, or new human being) may be expelled. And that is a potential abortifacient.

Sadly, Vagisil, with its bold, feminine colors, is using this as an opportunity to line its pocketbooks, promoting its potential abortifacient as if it’s a pair of shoes:

BOGOGO. Buy One, Get One or Give One FREE! When you buy one Preventeza™, you get one FREE to keep or give to another woman to help her be prepared, not panicked.

And Vagisil’s CEO, Keech Combe-Shetty, seems to think this new emergency contraceptive is a vital necessity for women, saying:

It’s hard to believe that while one in two women may need an EC in their lifetime, only 10 percent of women have actually used it. If you’ve had a condom break or missed a pill, you are not alone and something this common shouldn’t send you in a panic to the drug store. At Vagisil, we are making it our mission to take this panic out of that stressful moment by allowing you to remain in control and help prevent pregnancy before it starts with Preventeza.”

Let’s be clear: No one needs a pill that can potentially take a baby’s life. Wrapping it up with a big pink bow doesn’t make it any less problematic; it can, however, mean further destruction for the uninformed, as one young woman passes it on to her friend. This campaign invites teenage girls to buy a couple boxes and give one to a friend, who in the urgency of the fear she has of being pregnant, may simply take the pill before understanding what it is. Thus, the marketing campaign is irresponsible.

READ: Studies show all forms of emergency contraception cause abortion

A drug this powerful should not be a colorful campaign that’s obviously directed to young women, with no age caveats. Yet it’s part of the ongoing pretend panic being perpetuated by the abortion industry. Take the hysteria over emergency contraceptives in articles like this fear-mongering piece, which says:

Across the country, Americans are stockpiling emergency contraception in light of Justice Kennedy’s retirement and President Donald Trump’s Monday nomination of Brett Kavanaugh. The nation’s highest court is on its way to having a conservative majority, making threats against Roe v. Wade seem more dire than ever. People are shelling out $10 to $50 per dose even if they’ll never use the drugs themselves — they just want to have them available in case reproductive rights come under attack. That way, if a daughter, a son, a neighbor, a friend or a stranger finds themselves worried after having unprotected sex, they still have a modicum of choice.

Not even the most conservative of presidential contenders or judges has mentioned changing laws about contraception, yet the hand-wringing continues. Vagisil’s CEO, Combe-Shetty, is listed on the Vagisil page as a keynote speaker at a conference this summer. The page reads, “She’s squashing stigmas and shifting the perception of emergency contraception so we can all be in control.”

The stigma and perception of an emergency contraceptive like Preventeza being a potential abortifacient is something that should not be changed. Nor should the pill be something sold over-the-counter and marketed to teenage girls as Vagisil has chosen to do, placing the almighty dollar over the young women it claims to care about.