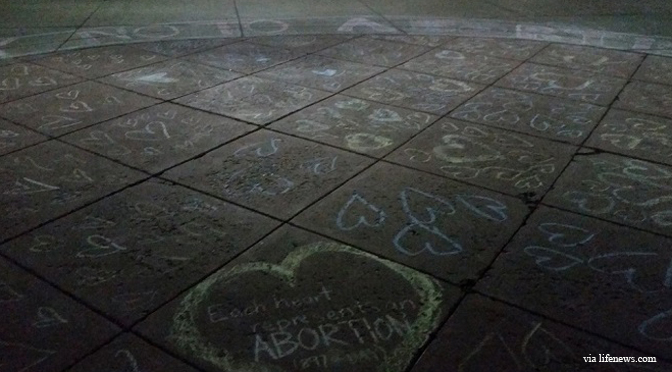 Students for Life of America is taking up the cause of a pro-life Utah State University student who alleges that campus police wrongly forced her to remove a pro-life sidewalk chalk display.

Melissa says she and friends participated in SFLA’s National Pro-Life Chalk Day by drawing 897 hearts accompanied by the messages “say no to abortion,” #defundpp, and pro-life quotes from Mother Theresa and Dr. Seuss. “I frequently see messages chalked across campus,” she writes, “Messages announcing activities, random pictures, etc…( Last year there was even a club handing out chalk during the day and people were drawing all over the sidewalks).” They further inferred it was permissible because campus security watched for nearly twenty minutes without comment.

But upon leaving, a campus police officer approached them, inquired whether they had permission, and said they had committed vandalism, claiming no chalking was allowed. Melissa says she and her friends promptly purchased brooms to clean off the sidewalk. “When we got back there were FOUR cop cars around our drawings, guarding it as if we they were guarding a crime scene. We told them we hadn’t forgotten about it and got to work.” After forty minutes of sweeping, they had to wait for a worker to bring a water tank to spray the rest off.

“I asked the officer who first approached us if it was the message that got us in trouble or the fact that it was chalk,” Melissa continues. “He told me that no chalk is allowed without permission, but then continued to tell me how offended pro-abortion people would get if it was on campus, and how it would get posted online and become a big deal.”

The students did not receive formal punishment, but may have to pay for the cost of the facilities worker with the water tank. “The feeling my friends and I received from the officers was that our message was offensive and that is why we had to clean it up,” Melissa says. “I was under the impression that we were all entitled to our own opinions and freedom of speech and expression!”

According to SFLA president Kristan Hawkins, her organization is currently consulting with their attorneys and the students to decide a course of action.