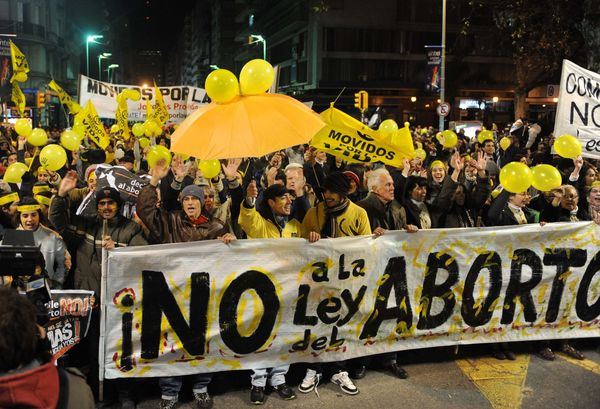 Senators use intimidation, falsehoods, and mockery to get their way.

The Senate of Uruguay voted to accept an abortion compromise bill Wednesday, despite opposition from the majority of the Uruguayan people. Before the vote, senators used intimidation tactics to silence pro-life critics. If approved by the president, the bill to legalize first-trimester abortions will make Uruguay the first Latin American country other than communist Cuba to permit elective abortion.

A more radically pro-abortion version of the bill was previously passed by the Senate in December 2011. After many revisions, the lower Chamber of Deputies passed the legislation by a single-vote margin at the end of September. Now that the Senate has sealed its approval on the compromise bill, it will be sent to President José Mujica’s desk. Although he has promised to sign the bill, the executive office will face stringent opposition from the citizenry.

Personhood Education, a global outreach project of Personhood USA, commissioned the largest poll ever conducted on the issue of abortion in Uruguay – likely the largest poll ever conducted in Uruguay on any issue – which surveyed 118,264 households. A resounding 56.1% of respondents identified themselves as pro-life and in favor of protecting life before birth. Only 43.9% said that they supported the abortion legislation. This poll directly conflicts with a much smaller survey of only 800 people that inaccurately suggested that the majority of Uruguayans support abortion.

Protege La Vida is a grassroots pro-life group building a coalition to keep abortion out of Uruguay. Their rapidly growing Facebook page, which was created last week, had over 8,000 “likes” today. Thousands of citizens called their senators before the vote to urge them to oppose the measure. According to firsthand reports, senatorial offices used intimidation, falsehoods, and mockery against citizens who called to voice their opinion. One claimed that callers would be fined 500 pesos for the phone call. Another claimed that the call was tracked and that the caller would be investigated by the police.

A Spanish-language video containing audio recordings of several calls was posted on the Protege La Vida page this afternoon:

Advocates for abortion legalization claim that the law will reduce high rates of maternal mortality, despite recent studies that show that countries prohibiting or severely restricting abortion, like Ireland and Chile, enjoy among the lowest maternal mortality rates. The new law even permits late-term abortions in certain medical cases, despite the recent International Symposium on Maternal Health’s finding that abortion is never medically necessary.

Opposition leader Senator Jorge Larranaga promises that his National Party will overturn the law after the 2015 presidential elections. “Experience from other countries shows that legalization doesn’t resolve the problem,” Larranaga said during debate today, adding that abortion is a matter of basic human rights. “We will repeal this law.”