Some surprise and disappointment in Washington.

This afternoon, members of the U.S. House of Representatives voted on the Prenatal Nondiscrimination Act of 2012 (known as PRENDA). PRENDA needed to pass by a two-thirds majority. With all but seven Republicans supporting PRENDA, and all but twenty Democrats opposing it, the bill passed 246-168. However, this number did not meet the two-thirds requirement, and PRENDA failed.

We are deeply saddened that the U.S. House of Representatives would vote to keep sex-selection abortion legal in this country. That anyone on either side of the political aisle would vote against a bill preventing gendercide in the United States is profoundly troubling. Given that CDC data suggests sex-selection abortion is occurring in our country, and a recent undercover video released this week by Live Action showing Planned Parenthood’s willingness to facilitate a sex-selection abortion, the American public cannot ignore this sexist practice.

But because of lobbying by Planned Parenthood and the White House, the bill to protect against sex-selection abortion failed. 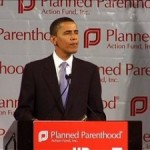 Indeed, Planned Parenthood and President Barack Obama openly came out against PRENDA. While Planned Parenthood claims to “condemn sex selection abortion” and that “gender bias is contrary to all we stand for,” the organization pressured Democrats to vote against a bill that would make illegal abortions performed on the basis of sex discrimination alone.

As one piece of evidence of Planned Parenthood’s scare tactics, LifeNews.com reported that “PPFA sent an email memo to House members on May 29 warning of its ‘intent to score’ a vote for the bill as a vote against ‘women’s health.’”

Jake Tapper of ABC News released a statement from the White House, disclosing that Obama opposed PRENDA. The exact quote?

[T]he end result of this legislation would be to subject doctors to criminal prosecution if they fail to determine the motivations behind a very personal and private decision.   The government should not intrude in medical decisions or private family matters in this way.

It appears that President Obama never read the text of PRENDA, or, if he did, that his administration attempted to deceive the public about what the bill would do. Under PRENDA, doctors have no responsibility to determine a mother’s reason for abortion. Instead, PRENDA emphasizes that only a doctor who actually knows the reason for an abortion could be charged:

(1) performs an abortion knowing that such abortion is sought based on the sex, gender, color or race of the child, or the race of a parent of that child … or attempts to do so, shall be fined under this title or imprisoned not more than 5 years, or both.

Representative Trent Franks expressed the surprise experienced by many when President Obama took a stand against PRENDA – legislation that would not ban any abortions other than those done on the basis of gender discrimination:

I guess as it happens, President Obama did come out, I’m understanding, last evening as against this bill – and I just have to say that underscores why some of us refer to him as the abortion president.

There has never been a more pro-abortion leader in the White House in the history of the United States.

I just am astonished that the leader of the free world would be against a bill that would protect unborn children from being aborted based on their sex.

Indeed, we are all left to question what our nation is coming to when Democrats can be so easily bought out by Planned Parenthood and our president – the leader of the free world – refuses to take a stand against one of the greatest forms of discrimination that exist in the world today.