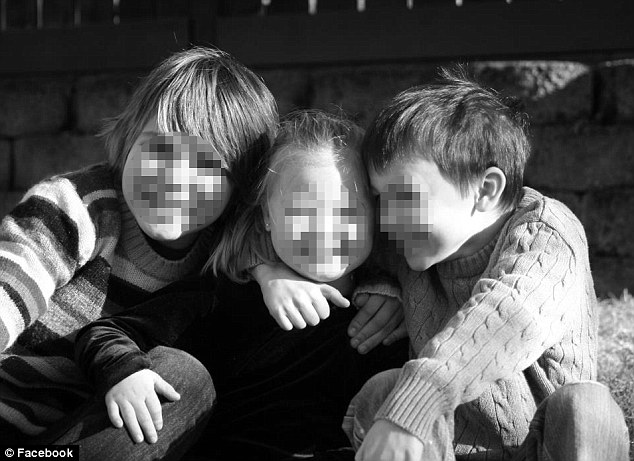 Kalanit Levy, pictured with her brothers, whose parents wished they could have aborted her.

Last week, I wrote about two parents who filed a “wrongful birth” suit against their hospital, because their daughter was not prenatally diagnosed with Down syndrome. At the time, they didn’t want their names released to the public, because they feared the backlash they might receive over the lawsuit. Well, they’ve won, and Ariel and Deborah Levy are apparently happy to talk to the media now that they’ve been paid off for the hassle of raising their daughter (emphasis mine).

A couple who sued a hospital for not telling them their unborn child has Down’s syndrome has been awarded a $2.9million payout.

Ariel and Deborah Levy, who say they would have had an abortion if they had known the child would be disabled, claimed they needed the money to pay for their daughter Kalanit’s lifelong care.

And a jury agreed, deciding on Friday that Oregon’s Legacy Health hospital had been negligent in failing to diagnose the condition in a pre-natal scan.

The hospital is considering appealing the verdict, but the Levys’ lawyer urged them to ‘let this case finally come to an end’.

… Although they say they love Kalanit and treat her the same as their other children, the Levys demanded a huge payout from the hospital to pay for the extra medical care she requires.

This case is just disgusting on so many levels.

First, how can any parent simultaneously claim to “love” their child, yet also wish that they had aborted them? One would think that, if they truly loved their child, they would be thinking, ‘thank God we didn’t find out, because we wouldn’t have her here if we did”. This couple looks at their daughter and sees her as a “wrongful birth”. They wish they had aborted her. Yet we’re supposed to believe they love her? If this is their idea of the love a parent should have for their child, then they don’t deserve to be parents.

[D]ays after Kalanit was born, her mother was taking her to the doctor ‘to show her off’ and he delivered the blow – a blood test confirmed the baby had Down’s. ‘It was devastating,’ Mrs Levy said.

… Their sons are in third grade and kindergarten. The boys, shown hugging their younger sister tightly in photographs, are bright – one has placed in the 99th percentile on standardised tests.

Apparently, once they found out she had Down syndrome, Kalanit was no longer worth showing off — especially not when their other two sons are just so bright and intelligent. Kalanit, meanwhile, can only speak in short sentences. They just had the perfect family until their little girl had the audacity to be born with an extra chromosome, and now, they have to be paid off in order to deal with the burden of raising her.

I’m curious: do these parents see any value in their daughter’s life? Or is she just a hassle, a child with a price tag, that they wish they could have gotten rid of? What would they do if one of their children had developed cancer? What if one of them was in a car accident and then developed a disability? By their thinking, they would then no longer deserve to live — especially if, Heaven forbid, their disabled child was a burden on them. After all, children are there to make life easier for parents, right?

Oh, wait. That’s not how it works at all.

The other chilling aspect of this case is the potential long-term implications it could have. As it is, 90% of babies diagnosed with Down syndrome are aborted (by “loving” parents like Ariel and Deborah Levy). But doctors don’t always catch the diagnosis. Nothing in medicine is ever 100% accurate. And sometimes, there will be errors. Sometimes, things will slip through the cracks. How many parents will be encouraged to sue hospitals now because their child was born with an extra chromosome? Prenatal testing, like the CVS test and an amniocentesis, are extremely accurate. But there are still those few cases where they aren’t, and now the precedent has been set.

Instead of looking at their daughter as the miracle and blessing she is, these parents look at her as a burden, a child they wish they could have gotten rid of, a child they need to be paid off in order to raise.

When I think of my unborn son, who has been diagnosed with Down syndrome, I don’t feel dread. I don’t worry about the costs of raising him. And considering my husband is a Marine, while Ariel and Deborah Levy are employed as a civil engineer and a dental hygienist, respectively, I’d be willing to bet that, even without the lawsuit, they’re in a much better financial situation to raise a child with special needs than we are. (I guess we should sue as well.) I think, gosh, it’s a miracle that he survived, since around 80% of babies with chromosomal abnormalities end up as miscarriages. I think about how cute his nose looks on ultrasounds, and I think about how much he kicks and moves in the womb. I think about how much fun Ben, my older son, and Wyatt will have together as they grow up. There is no thought about the “burden” he will supposedly be — instead, I see a life full of potential. Isn’t that how a truly loving parent would feel, as opposed to wishing they could have aborted their child and demanding a payoff in order to raise them?

My son, and the thousands of other children like him, are not defective. They are not burdens, and we, as parents of these children, do not need to paid off to compensate for the supposed hassle of raising them. There is no wishing that the child had never been born, that we could have killed him if we had the chance, that we need money to offset the burden. Life comes in many forms, and all of it is sacred and beautiful and worthwhile.

Perhaps Ariel and Deborah Levy need to be reminded of that as they enjoy their $2.9 million payoff in exchange for dealing with their “defective”, if-only-we-had-aborted-her daughter.