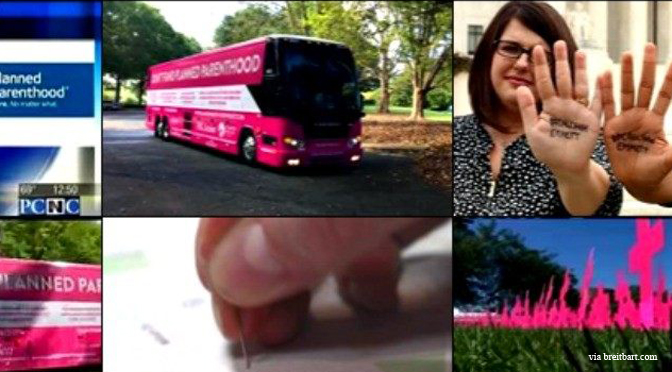 (Students for Life) On the fourth day of the Students for Life of America and FRC Action five-day, five-campus Don’t Fund Planned Parenthood bus tour, the University of Pittsburgh showed pro-life students the tolerance that the pro-choice side is typically known for.

In reality, they were disrespectful, obnoxious and vulgar.

Abortion advocates took a page out of Miley Cyrus’ playbook and lewdly twerked, yes twerked, on the banners displayed at the display and on one of our SFLA staff members. It was ridiculous.

There were little kids there and the abortion advocates were yelling obscenities and had drawn them on their signs. They accused pro-life students of being racist, ignorant and anti-gay. They even took a Sharpie to one of our banners and attempted to draw an “X” through it. They were a bit amateur though since you could barely see the X. #fail

The students also attempted to block our giant pink bus from moving anywhere. Hey, more people to see it on campus if it wasn’t going anywhere! The police were called because abortion advocates had created a very hostile environment.

Michele Hendrickson, the SFLA Capitol Area Regional Coordinator, was there and she explains what happened: The Planned Parenthood Project display ran as expected on campus for the majority of the day. The display consists of several teardrop banners that display stats from Planned Parenthood’s own annual report, showing how many abortions they do a year and how much money taxpayers give them. There are also 897 pink crosses set up in the ground to symbolize the number of abortions Planned Parenthood does per day. We set up about 10am and had great conversations with students who approached the display, some more intense than others, which is totally normal for this display. There were even students who shook our hands and thanked us for openly sharing ideas with such a calm and respectful manner. Other students walked away agreeing to disagree, but were able to maintain a level of respect.

Unfortunately a surprising amount of students who were proud Planned Parenthood supporters decided it was best to scream obscenities as they walked by rather than engage in intellectual discussion.  One girl even asked, “Is this even legal?​”  I assured her that free speech was still very much legal in our country, even if you don’t agree with it.  She rolled her eyes and walked away.

The volume of conversations peaked right at the end of the display around 1:45 PM. At least 10 pro-life volunteers were immersed in the crowd, engaged in productive dialogue, when we noticed our display had been vandalized.  A giant black “X” was drawn on one of the posters. Moments later, as our 2 o’clock break-down commenced, one girl angrily walked over to our display with a question mark written on a piece of poster paper (maybe to question our display? I don’t know. Communication wasn’t her strong point). She started yelling and was visibly shaking as she spoke. The statements she made were inaccurate and offensive to the student group, calling them names. She continued to shout that everything we printed on the banners was a lie.

I attempted to explain that the sources are Planned Parenthood’s annual report as well as information found by the undercover videos provided by the Center For Medical Progress.  She wouldn’t accept that, and she would not engage in a calm conversation with me, so I ended the discussion with her. Although she had rallied some other supporters, she was the one taking the lead with yelling as much as she could.

Her next move was to convince her friends to take pictures of her while she posed sexually around the banners putting her legs around them, groping them, and at one point “twerking”, or rubbing her butt, all over the banner.  After a few more minutes of her yelling by herself, she told others to grab the blank paper she had brought to make their own signs.  Students created signs that called the pro-life students “ignorant” and other signs had vulgar language.

Our team continued to break down and tried our best to not respond to the name-calling and offensive language.  Once the collective yelling began, we were concerned enough to call the campus police, because the space was ours to be in

until 3PM.  The protestors created a very hostile environment that did not allow for productive academic discussion.

We officially cleared the space around 3PM, and a small crowd was still there talking amongst themselves. Other students reported to us that while we were running the display, our tour bus was being blocked by students in the street who stood in front of the bus for several minutes.

Friends and family of mine have both graduated from and taught at the University of Pittsburgh.  Pitt has always been held in high regard in my household.  But today, I am left embarrassed to see how this group of disruptive intolerant young adults is portraying the campus and spending their college-career suffocating free speech.

(Editor’s Note: Article reprinted with permission from Students for Life)