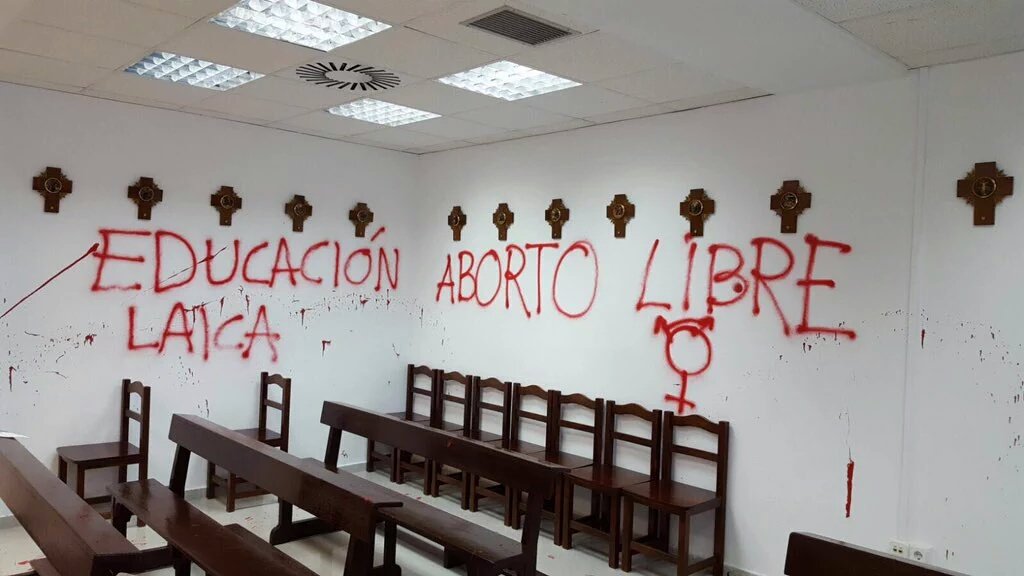 This week, priest Miguel Fernando García López discovered that the chapel of Universidad Autónoma de Madrid (the Autonomous University of Madrid) in Spain had been desecrated with pro-abortion graffiti.

López came in Wednesday morning to find “free abortion,” “secular” education, and a transgendered rights symbol scrawled on the walls in red paint, as well as red splotches (possibly representing blood) that “covered” the walls, pews, statues, confessional, and tabernacle. “Free abortion” was also written on the outside of the chapel, and the lock on the chapel door had been broken.

López called the police soon after, who have opened an investigation. They found posters believed to have been left by the vandals, but they do not appear to offer leads as to their identities. This is the first instance of vandalism to target the university chapel.

In the past, Live Action News has reported on similar instances of pro-abortion activists vandalizing pro-life and religious property in the United States, Argentina, Chile, Italy, and Canada.

Despite the vandals’ call for “secular education,” which is commonly assumed to be associated with principles of tolerance and intellectual diversity, the Daily Wire’s Amanda Prestigiacomo notes the crime was anything but tolerant: “Unfortunately, intolerance for those with pro-life views, in America and abroad, is rather common–especially on college and university campuses.”