A recently unearthed report published by the Journal of Clinical Pathology reveals that between 1957 and 1979, thousands of aborted human babies were collected by a Fetal Tissue Bank located in the U.K. — and were later used for research. The report focused on babies who were aborted in the London area by hysterotomy, prostaglandin induction, and suction abortion.

Their remains were then procured by the human Fetal Tissue Bank located at the Royal Marsden Hospital for the purpose of transplantation to patients with leukemia.

WARNING: Readers may find the image below disturbing.

“The Fetal Tissue Bank is financed by a Special Project Grant from the Medical Research Council. It is located at the Royal Marsden Hospital, Fulham Road, in the Department of Cytogenetics and Immunology, and its purpose is to collect dead fetuses for dissection and to distribute the tissues,” author Sylvia D Lawler began the report. “The Bank is located in a cancer hospital because it was founded by Humphrey Kay in 1957 with the idea of providing supplies of human fetal tissue for transplantation to patients with leukaemia,” she added.

The graph below shows the numbers of babies collected by the bank since 1957. Keep in mind that abortion was not fully legalized in the United Kingdom until April 1967: 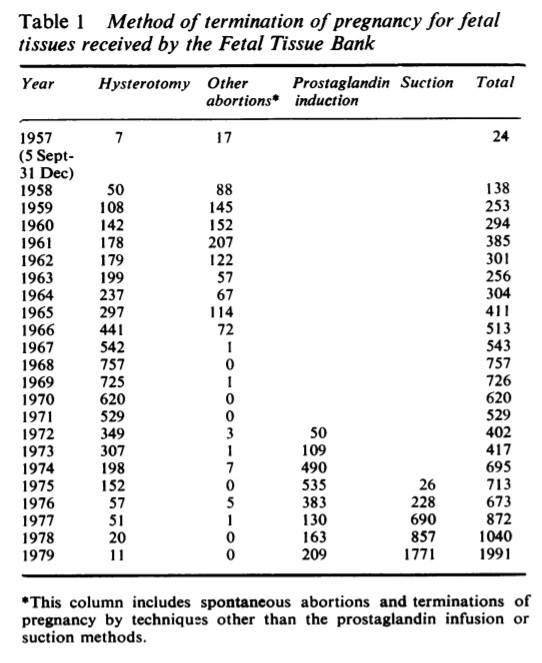 “Fetuses are collected within the London area and brought back to the hospital as rapidly as possible for immediate dissection by surgical theatre techniques in a ‘sterile’ room. Certain clinical data are obtained, in particular the date of the last menstrual period before the termination of pregnancy. Each fetus is given a number, and the tissues are distributed, the names of the recipients being recorded,” Lawler wrote.

“When the Bank was founded, the operation of hysterotomy was being performed regularly, and the number of fetuses received from this source increased each year until 1968, since when the number has continued to decline steadily,” the report states.

Hysterotomy abortion has been described as “a miniature abdominal Cesarean section” where the child is removed from the mother’s abdomen alive. The image below from the 1981 pro-life brochure, Death or Life by Hayes Publishing, shows how a hysterotomy is done. 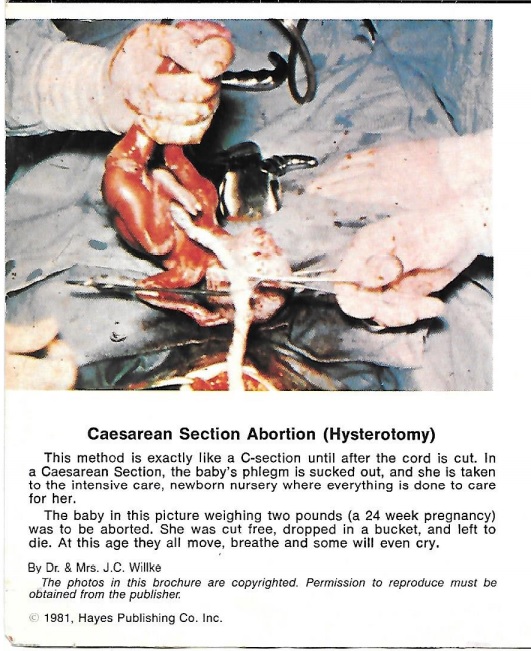 According to Lawler’s chart, just one year (1968) after the U.K.’s decriminalization of abortion, 757 babies killed by hysterotomy abortion were procured by the fetal tissue bank for research.

In his book, “Abortion and the Pro-life Movement,” Dr. John C. Willke described prostaglandins as “a newly discovered family of human hormones… which had the capacity for good as well as evil.” Prostin F2 alpha was injected into the amniotic sac, “causing violent contractions and delivery,” which Dr. Willke said “usually killed the baby but not always.”

By the 1970s, Lawler noted that “medical induction became a method of choice for the termination of pregnancy, and early in the 1970s, prostaglandins began to be used for this purpose.”

“Fetuses obtained after a prostaglandin termination were first collected in 1972, and the number increased until 1976,” she added, later noting that “tissue cultures using organs obtained from fetuses after a medical induction produce only a limited yield of viable cells. It therefore became apparent in the early 1970s that, if the Bank were to continue to meet its commitments, some other source of tissue would have to be found.”

So, according to the report, “a pilot study was made to see whether organs could be identified in the disrupted fetuses obtained from terminations of pregnancy by the suction method.”

“Disrupted fetuses” — an interesting term to use to refer to children shredded and dismembered by suction abortion.

“We started to dissect disrupted fetuses in 1975, since when the number collected has steadily increased. The development of this technique has enabled virologists to continue to use human fetal tissues for the isolation of viruses and the preparation of vaccines,” the 1981 report states.

“In a typical month, for example, July 1980, we received 173 disrupted [suction abortion] fetuses, of which 107 were discarded because no organs were identified. From the remaining 66 fetuses with identifiable organs, 327 specimens of tissue were distributed, and from the 28 prostaglandin-induced abortions of whole fetuses, 206 specimens of tissue were distributed,” Lawler states.

“Between August 1978 and the end of July 1980, 3426 disrupted fetuses obtained from pregnancies terminated by the suction method were collected by the Fetal Tissue Bank,” Lawler later added.

The document is one in a long line of evidence that experimentation on aborted children has been happening for decades even outside the United States. The ghoulish attitude of this industry shows that preborn babies have become commodities and are often valued more for their tissue and organs — dead — than they are alive.