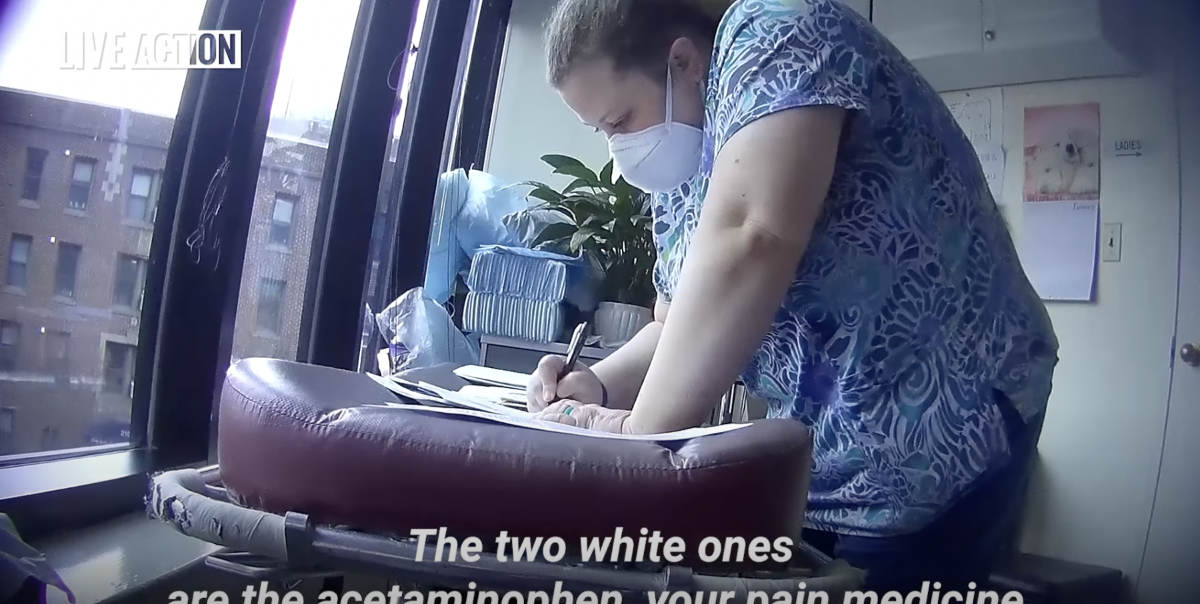 Live Action released new undercover footage today from inside the Washington Surgi-Clinic abortion facility in Washington, D.C., owned and operated by abortionist Cesare Santangelo. The footage shows that the abortion business requires pregnant women to take Xanax, a medication that can cause drowsiness and impair memory, before meeting with the abortionist and giving final consent for an abortion. The Washington Surgi-Clinic is the same facility where the bodies of over 100 babies were obtained by pro-lifers, including five babies who appeared to have been killed late in pregnancy, possibly by illegal means.

The woman involved in the filming of the undercover video, who was 28 weeks pregnant at the time, has filed a complaint with the D.C. medical board regarding this breach of ethics surrounding informed consent. Experts who have filed affidavits supporting the complaint say that making patients consume mind-altering medication prior to meeting with the abortionist is a grave violation of basic medical ethics.

The complaint notes that “acute administration of Xanax risks ‘cognitive impairment,’ which includes ‘poor attention and anterograde amnesia’ as manifested by ‘difficulties learning new material.'” It also states, “administering Xanax prior to a full medical consultation appears to be a negligent, if not reckless, practice of medicine. It also appears highly unlikely that introducing benzodiazepines before said consultation is a prevailing standard of acceptable medical practice” and asks that the D.C. Medical Board “begin an investigation into Dr. Santangelo and Surgi-Clinic and whether the practice of requiring use of benzodiazepines prior to medical consultation warrants the imposition of sanctions or disciplinary action here.”

Xanax pills come in different colors based on dosage, and the nurse tells the patient “the two blue ones are the Xanax.” Blue Xanax are typically 1 mg each, except for the blue Xanax bars, which are 2 mg each. The recommended starting dosage of Xanax is 0.25 mg to 0.5 mg administered three times daily. According to Drugs.com, the dosage may be increased every three to four days in increments of no more than 1 mg per day. Some individuals have reported memory loss or blacking out after taking Xanax, and higher doses will have a stronger effect.

What the experts say

Dr. C. Ben Mitchell, ethicist and former Graves Chair of Moral Philosophy at Union University, reviewed the video footage and explained that it “indicates a likely ethical violation and could warrant further inquiry due to it demonstrating that patients were required to ingest Xanax before a full medical consultation could occur.”

Dr. Mitchell continued, “Being a physician entails profound ethical responsibilities and professional duties to the patient to inform, treat, and care. The physician himself or herself is ultimately responsible to ensure informed consent, in which the patient understands the diagnosis, treatment options, potential outcomes, and possible complications of a procedure or medication. That means being available to the patient to answer any questions the patient has about his or her care. Failure to do so is a dereliction of duty.”

In the video, a nurse is seen telling the patient, “Uh, well, unfortunately, [the pills] need to be in your system in order for the doctor to do the procedure.” When the patient asks if the Xanax she is being told to take will affect her “clarity of thinking,” the nurse responds, “It shouldn’t. I mean, you might be a little sleepy…” She adds, “[W]e have to make sure that — that’s in your system before you talk to the doctor. He’s not going to be able to speak with you until he is ready to do [the abortion]. And you’re actually pants off in the room.” (emphasis added)

It is highly unethical for a doctor to refuse to speak to a patient about the procedure she is about to undergo until she is medicated with a drug that can impair clarity of thinking, and is in a vulnerable and unclothed position in the room in which she will have the abortion.

Dr. Christina Francis, CEO Elect of the American Association of Pro-Life Obstetricians and Gynecologists (AAPLOG) reviewed the footage and explained:

Xanax is a substance that, in a patient who is not used to taking it, would most definitely impair her judgment and therefore her ability to give truly informed consent. There is no reason a medication like this should be routinely given to a patient prior to her meeting with a physician and going through the consent process.

Oftentimes patients are not allowed to drive or operate heavy machinery for up to 24 hours after even minor procedures due to sedating medications they have received that impair their competence to make complex decisions. Xanax is a clear sedative, especially in a patient naïve to that medication.

Additional concerns not in the complaint

In addition to revealing this breach of ethics at the Washington Surgi-Clinic, the nurse in the footage provides further confirmation that the facility commits late-term abortions without using feticide to ensure fetal death. This increases the chance that babies will be born alive during abortions. A previous Live Action investigation showed Dr. Santangelo admitting that any children accidentally born alive during abortions would not receive any medical assistance to survive — neglect that is illegal under federal law.

Rather than give the preborn child an injection of digoxin meant to cause cardiac arrest, the nurse explains that the abortionist will kill the baby “as humanely as possible.” But as was also confirmed by Live Action’s previous investigation, Dr. Santangelo causes the baby’s death by cutting the umbilical cord and waiting for the child to die, drastically increasing the chance that a child may be born alive and then killed, which is a federal crime. The nurse tells the woman that her 28-week baby’s body would “go[] to medical waste.”

Tragically, the video footage also shows the nurse telling the patient that she may have to deliver her stillborn (or possibly living, premature) baby alone in her hotel room, admitting, “there is a possibility that you could go into premature labor.” The patient expresses concern about what hotel staff might think, were this to happen. The nurse brushes off these concerns.

She then asks the patient to sign paperwork stating that they spoke about the possibility of premature labor, reiterating, “You may go into premature labor and deliver the fetus in your hotel.” She adds, “We could just tell you what to do with the remains.”

The undercover footage released today shows that the [Washington] Surgi-Clinic abortion facility is forcing mothers to take mind-altering medications before meeting with the abortionist and giving final consent. This is a grave violation of basic medical ethics, and the patient has filed a complaint with the D.C. medical board.

The footage also provides first-hand testimony that the Washington-Surgi Clinic performs late-term abortions without a feticidal drug, increasing the chance that babies would be born alive and then brutally and illegally killed. Tragically, this footage also shows the nurse relaying the reality that the patient may be left to deliver her dead child alone in her hotel room.

Rose called for the abortion business to be closed down.

It is clear that the government of Washington, D.C., including Mayor Muriel Bowser, the D.C. medical examiner, and the Chief of Police, must investigate Santangelo and his abortion facility. They are not only killing children through abortion, but may also be committing illegal infanticide and other federal crimes such as ‘partial-birth’ (D&X) abortions.

Editor’s Note 6/23/22: This article was updated with more information on Xanax.