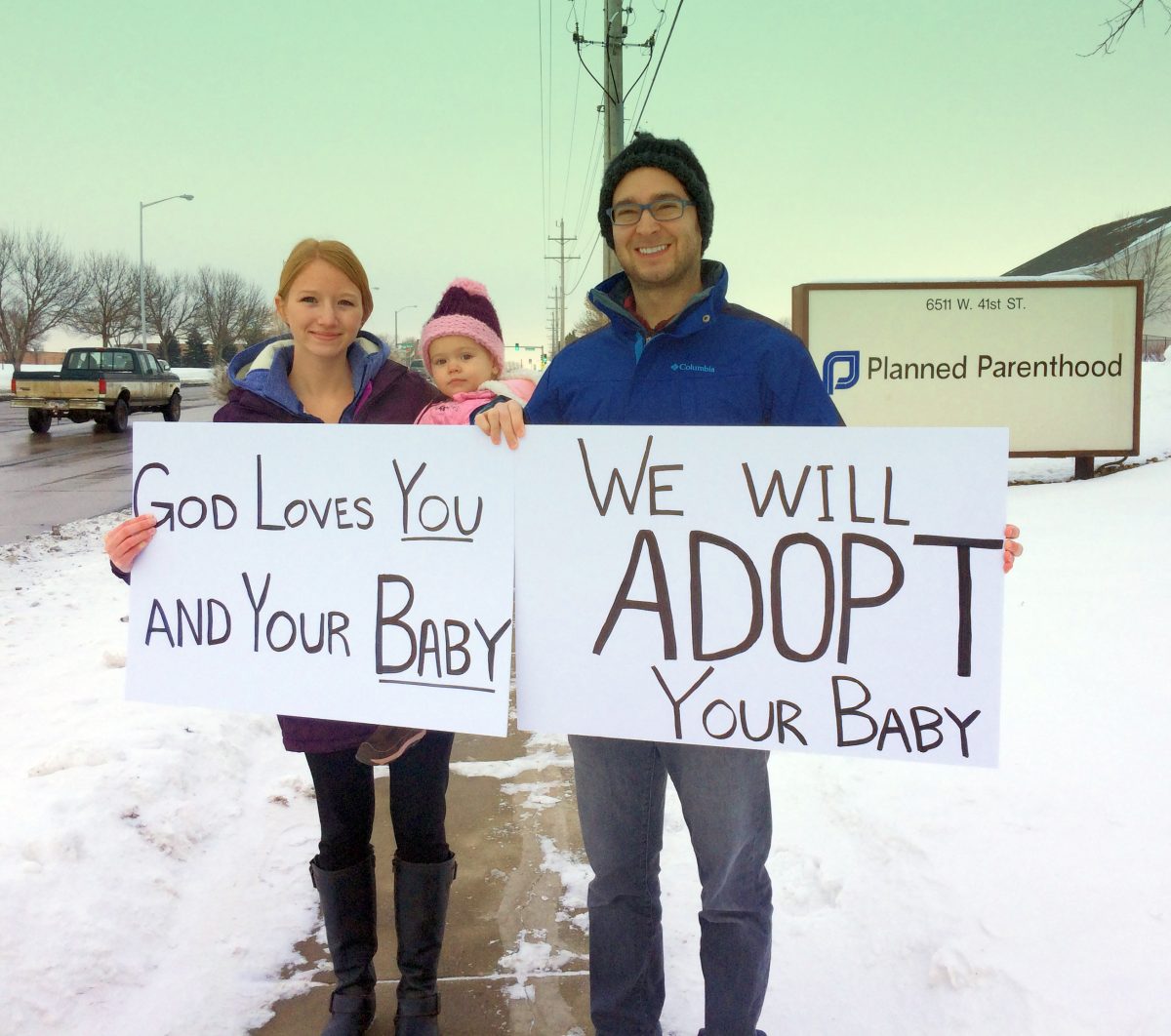 Last year, Live Action News featured the story of Kevin and Nicole Cook. Horrified by the undercover videos released by the Center for Medical Progress (CMP), the Cooks stood outside of an abortion clinic in Lexington offering to adopt a child who would otherwise be aborted [see picture]. While this offer has not yet been accepted, another young couple, William and Liesel Hines, saw the story and were inspired to do the same.

The Hines live in South Dakota with their two-year-old daughter, Penelope. Like Kevin and Nicole, they were deeply disturbed by the CMP’s videos. “What’s almost equally shocking to me,” says William, “is the lengths to which so many will go to excuse the glaring evidence that these are babies, and that they’re being painfully ripped apart and sold for profit.” Faced with such “glaring evidence,” William and Liesel knew they had to act. “Knowing what we know, we can never go back to passivity.”

The couple began attending prayer vigils and peaceful protests outside of Planned Parenthood, but always left “sad and frustrated” that they could not do more to stop the violence. Then William stumbled across Live Action’s story on Kevin and Nicole:

When we saw the Live Action story on the Cooks, the first thing I thought was, “You can do that? Why aren’t we doing that, too?!” I emailed the article to my wife and said, “We are doing this.” And she replied, “Yes, I want to do that. I’m serious.” A month or so later, our home study was complete, our adoption attorney was ready, and we were out in front of Planned Parenthood with our signs. After standing outside of the Sioux Falls Planned Parenthood every week for about seven months, the couple was finally connected with a woman who had resisted heavy pressure to abort and was seeking a family to adopt her unborn child. “We were looking for her, and she was looking for us,” William explains. “It was definitely arranged by God. She is such a kind and loving person. Every time I hold our beautiful tiny baby girl, I thank God for this woman’s tremendous courage and selflessness.”

That “beautiful tiny baby girl” is Cecilia, whom the Hines welcomed into their family in August. “When I finally held her,” William continues, “there was this instant connection and profound love. Now she’s my snuggle bug and I can hardly put her down!”

Like Kevin and Nicole, William and Liesel see adoption as a natural expression of their Christian faith:

We were deeply moved reading the accounts of the early Christians who would rescue babies from (legal) infanticide throughout the ancient Roman Empire. In those times, an unwanted baby was commonly placed on the ground outside the city wall and abandoned to die from the elements. Christians would follow the cries to the unwanted child, then take the baby home to be raised as one of their own.

In the proud tradition established centuries ago, it remains the responsibility of Christians to defend and care for orphans. We are compelled by the scripture that defines pure and faultless religion as “caring for orphans and widows in their distress” (James 1:27). We believe that the act of adoption is a practical reflection of the Gospel: Though we were outsiders, God adopted us Gentiles into his family through Jesus Christ (Ephesians 1:5). As God’s love for us overflows, we are eager to shower our new child with love.

William hopes that others will have this same vision. “I would love to see every abortion clinic in America have a family out front, showing compassion to these pregnant women and offering to adopt these babies.”

Author’s note: If you would like help the Hines family with the tremendous expense of adoption, you may give a donation here.