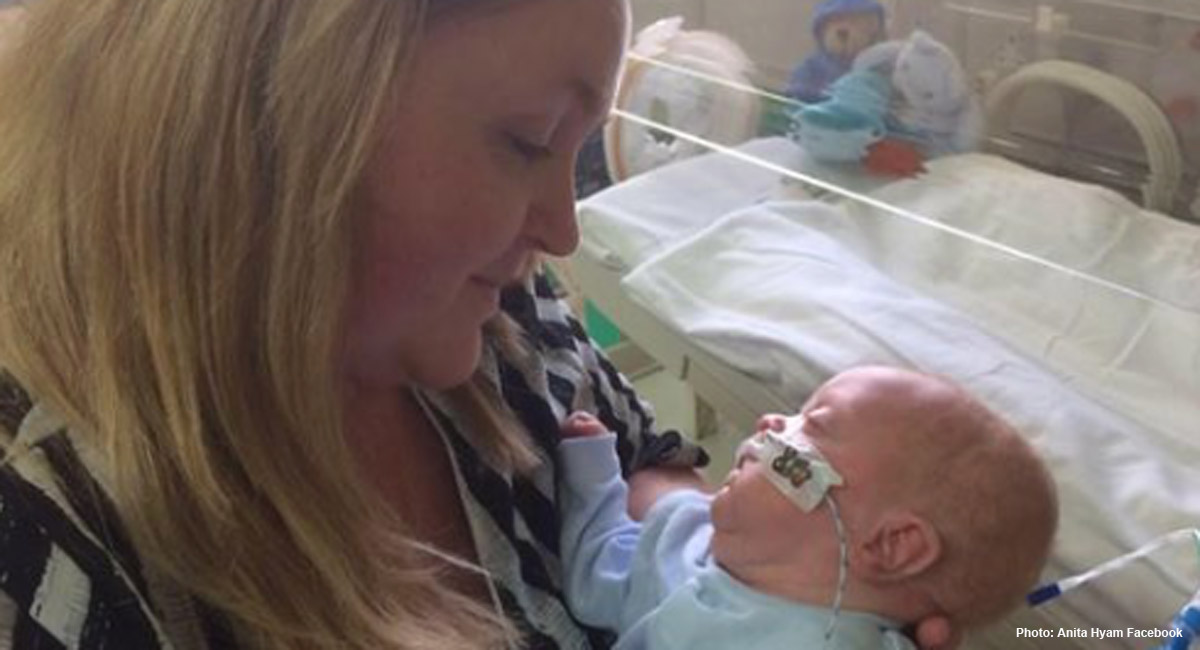 In the United Kingdom, babies can be legally killed by abortion up through 24 weeks of pregnancy. Babies who are diagnosed prenatally with a disability or birth defect of any kind can be aborted at any point during pregnancy. Many parents never think about what this really means… until they give birth to a premature baby, and realize that children like their own can be legally killed.

Anita Hyam gave birth to her son, William, just two days before the 24 week abortion limit. He weighed just 1 lb, 4 oz., and doctors initially warned that they wouldn’t be able to resuscitate him if he didn’t have a heartbeat. Hyam’s experience has her rethinking the 24-week abortion limit in the United Kingdom.

“I was only 23 weeks pregnant when I went into labour and I knew that people could have abortions up to 24 weeks. After my experience, I think the abortion limit should be lower, or at least the limit should be lowered for when they will resuscitate a premature baby to 22 weeks,” said Hyams. “People have abortions at 24 weeks and yet look at William, he is alive and kicking and a fully-formed baby. He is not quite as developed as other babies his age, but he is getting there, and he is alive.”

But medical advancements will continue to lower the ages at which babies can survive outside of the womb. If we believe in protecting human beings in the womb at 22 weeks, why not at 12, when the baby’s organs are all in place? Why not at fertilization, when the new human being, with distinct DNA programming all of that human being’s traits, is created? Size or level of development should not determine the value of a human being.

Hyam, who works as an intensive care nurse, initially was unconcerned when she felt poorly after a shift, and went to bed, hoping to feel better. But she woke up at 5:00 a.m. in labor. “I’d already had two children, so knew exactly what the feeling was. I was having contractions,” she said. “I went downstairs and walked around for a bit, praying I wasn’t having the baby.” She called her father to watch her other kids, and she and her husband drove to the hospital. “We wanted this baby so badly, as I’d miscarried before,” she said, adding that she had struggled to get pregnant, as she has polycystic ovary syndrome.

After William was born, though, he beat the odds immediately by taking a breath on his own. Doctors intubated him, and then took him to the NICU. “I saw William for the first time at three hours old,” she said. “I was scared to even touch him, because he was so tiny, just the size of my hand. But it was like looking at a little miracle. He was fully formed, but not completely developed. All his fingers and toes were there, he was just like a miniature version of a baby.” He was transferred to Royal London Hospital that same night, and stayed in the NICU for 45 days.

“We stayed with him as much as we could and read to him every day,” she said. “He got stronger every day and, on August 31, was taken back to Southend University Hospital, as he had made so much progress.” In October, he was finally able to come home. “His sisters adore him and are like two extra little mummies to him,” Hyams said of her daughters. “I still feel so emotional talking about it all. He is so full of smiles and life. He can sit up on his own, but can’t crawl just yet. I know he’ll get there, though. And I’m just so grateful that he’s here.”