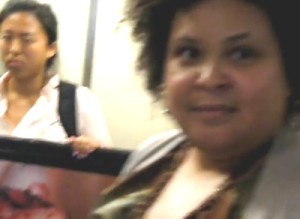 UC Santa Barbara professor Mireille Miller-Young in the foreground with an UC Santa Barbara student in the background that holds a sign stolen from 16-year-old Thirin Short.

A recent incident at the University of California, Santa Barbara made nationwide waves. Thrin Short, a 16-year-old pro-life high school student, was handing out pro-life literature in the campus “free speech zone.” She found herself face-to-face with Mireille Miller-Young, an associate professor of feminist studies, specializing in “race, gender and sexuality in visual culture and sex industries in the United States,” with a focus on pornography and sex work.

Miller-Young approached the group of pro-lifers and began yelling and mocking them. Short was holding a pro-life sign, and Miller-Young began a chant demanding that students “tear down” the sign. (She was comparing a pro-life sign to Gorbachev’s wall; nice.) Miller-Short then tore the sign out of Short’s hands and gave it to other students. As Short followed her, asking for the sign back, Miller-Young responded by assaulting Short.

The Santa Barbara district attorney has responded by filing misdemeanor charges of theft, battery and vandalism against Miller-Young, and rightfully so. But how did UC Santa Barbara respond? By blaming the victim: Thrin Short.

Vice Chancellor of Student Affairs Michael Young sent out an e-mail to every student on campus. National Review obtained a copy of the letter, which mainly attacks and smears the pro-lifers for daring to exercise their rights to free speech.

During the past few weeks, UCSB has been visited by various anti-abortion crusaders. Some have been considerate and thoughtful in promoting their message; others have openly displayed images that many in our community find distressing and offensive.

We have also seen earnest and thoughtful religious missionaries, and we have seen proselytizers hawking intolerance in the name of religious belief. As a consequence of interactions with the more extreme of our visitors, students have expressed outrage, pain, embarrassment, fear, hurt, and feelings of harassment. Moreover, I have received requests that the campus prohibit the peddling of “fear,” “hate,” “intolerance,” and “discord” here at UCSB.

… And now we are tested once again, outsiders coming into our midst to provoke us, to taunt us and attempt to turn us against one another as they promote personal causes and agendas. If we take the bait, if we adopt negative tactics and engage in name calling, confrontation, provocation, and offensive behavior, then they win and our community loses. While urging you to engage with differing ideas and opinions in a civil manner, I also want to remind you that you have the option not to engage at all. You do not have to listen to, look at, or even acknowledge speech or expression that you find provocative or offensive. The Arbor Mall is a free speech area, as is the area in front of the University Center. If you do not want to be confronted by certain materials or expressions, you should avoid the free-speech areas when you expect that you might encounter them, or simply ignore them. I promise you the visitors will hate that.

Miller-Young’s assault on Thrin Short was not mentioned once. In fact, Miller-Young wasn’t mentioned by name at all. The problem evidently is not that a UCSB associate professor assaulted a 16-year-old. It’s that the 16-year-old dared to exercise her right to free speech at UCSB, and said things that Miller-Young and Vice Chancellor Young didn’t like.

The evidence of what Miller-Young did is so strong that prosecutors and filed formal criminal charged. In a police report, she claimed that she had a moral right to assault Short and that she was “triggered” because she’s pregnant. Because obviously, whenever something bothers you, the answer is always to assault the person responsible. And the university’s response is to blame Short for “making” Miller-Young attack her – not reconsider why they’re employing a woman who is so obviously unhinged.