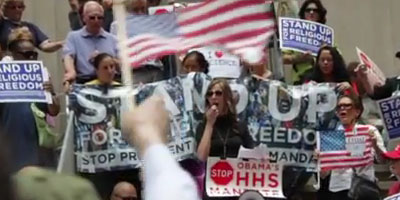 Speaking out against the abortion mandate in the PPACA.

In an effort to oppose the contraceptive and abortifacient mandate from the HHS, the United States Conference of Catholic Bishops has announced a “Fortnight for Freedom.” The campaign began yesterday, today, June 21, and will go until July 4 (Independence Day). In a statement on the USCCB website an overview of the campaign is presented:

The fourteen days from June 21—the vigil of the Feasts of St. John Fisher and St. Thomas More—to July 4, Independence Day, are dedicated to this “fortnight for freedom”—a great hymn of prayer for our country. Our liturgical calendar celebrates a series of great martyrs who remained faithful in the face of persecution by political power—St. John Fisher and St. Thomas More, St. John the Baptist, SS. Peter and Paul, and the First Martyrs of the Church of Rome.  Culminating on Independence Day, this special period of prayer, study, catechesis, and public action will emphasize both our Christian and American heritage of liberty. Dioceses and parishes around the country have scheduled special events that support a great national campaign of teaching and witness for religious liberty.