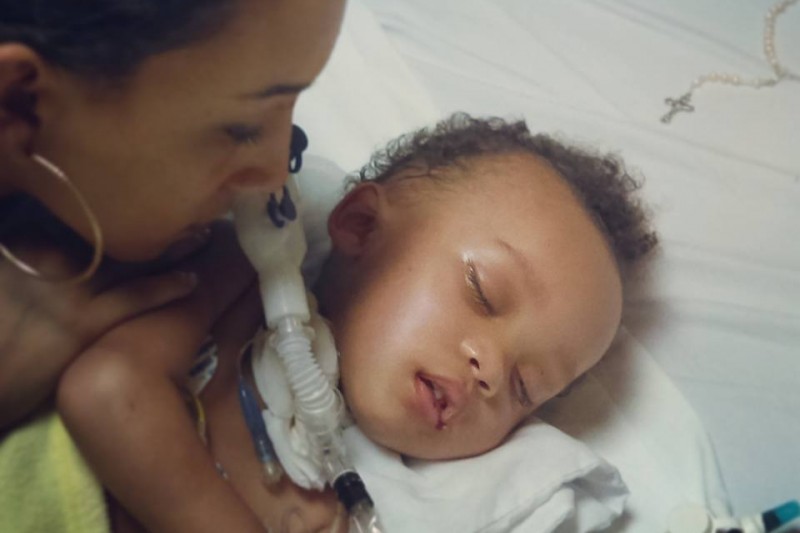 Israel Stinson, who suffered cardiac arrest after an asthma attack about four months ago and was declared brain dead, is said to be making progress at his new hospital.  The two-year-old was placed on life support and doctors declared nothing could be done to save his life. They attempted to force his parents, Jonee Fonseca and Nate Stinson, to have life support removed, but a judge granted them one week to find a new hospital for Israel.

Unable to find a hospital in the United States willing to take Israel, his parents finally found one outside of the country. Now, two months later, they report that he is improving. “Israel is making an amazing recovery since his gastronomy and tracheotomy tube have been placed,” his parents wrote on Israel’s Go Fund Me page. “He is gaining weight, taking some of his own breaths, moving his fingers and toes and eyes are dilating, hes even impressing the Drs.”

His parents also report that each day Israel is improving and is increasingly responding to touch and sound. He has been able to reduce some of his medications.

“We believe it is only a matter of time and patience before he opens his eyes,” wrote his parents.

His parents also wrote that Israel is no longer classified as “brain dead” and because of that they should be able to return to the United States to a hospital that is willing to take him.

“We just want to thank you all again for your words of encouragement as well as your continued prayers,” they wrote. “The love we have received is so uplifting we cant thank you all enough.”