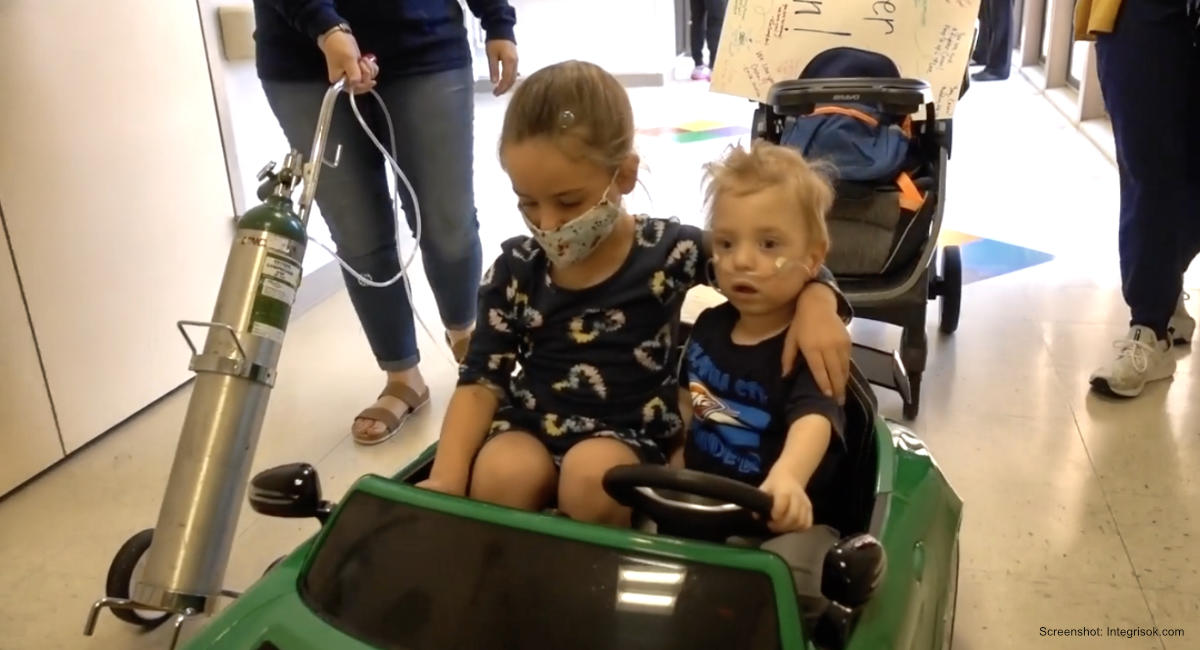 Born prematurely at 26 weeks gestation in May 2019, Casen Hazlewood spent the first 154 days of his life outside the womb in the hospital. Since then he has been in and out of the hospital battling respiratory infections. After his last inpatient visit, the medical staff at Integris Baptist Medical Center, held a celebration for him as he went home in time for Christmas.

Casen’s twin brother Hudson sadly died 12 days after birth due to an infection. The identical twins had battled Twin-to-Twin Transfusion Syndrome in the womb, with Casen receiving less blood flow than Hudson due to selective intrauterine growth restriction. The condition can lead to the death of one or both twins, but a risky surgical procedure can be performed to try and save both babies.

“It is a huge relief to have him home,” his mother Kari Hazlewood told PEOPLE of now-two-year-old Casen. While in the hospital, he underwent 14 surgeries. He spent 154 days in the neonatal intensive care unit, often fighting off infections, and he initially went home in October 2019 but stopped breathing six days later and was once again hospitalized.

“Casen is a fighter,” said Hazlewood. “He has been battling something since before he was even born. He may be tiny but he’s as tough as they come.”

Mild colds and fevers have been enough to send Casen back to the hospital multiple times since his birth, equating to about half of his life spent in the hospital. “In all, between the NICU and the PICU and the 14 surgeries he’s endured, Casen has spent almost an entire year in the hospital,” Erica Liddell, a certified child life specialist at Integris Children’s Hospital, said in a statement. “That’s half of his little life. So, we wanted to celebrate him in a big way.”

Babies born as young as 21 weeks have survived outside the womb, including Curtis Zy-Keith Means, who was born in July 2020 at just 21 weeks and one day. He is now the Guinness Book of World Records holder as the most premature baby to survive, a status he beat out former record-holder Richard Hutchinson for by just one day. Richard was born just a month before Curtis, on June 5, 2020, at 21 weeks and two days.

Casen’s family, including big sister Brynlee, are happy to have Casen home for Christmas and are grateful to the medical team that cares for him. “As much as we love the folks at INTEGRIS Children’s and want them to continue to be a part of Casen’s life,” said Hazlewood. “We are hoping to see them less often in the new year! We want to see them socially, not just when Casen is sick.”