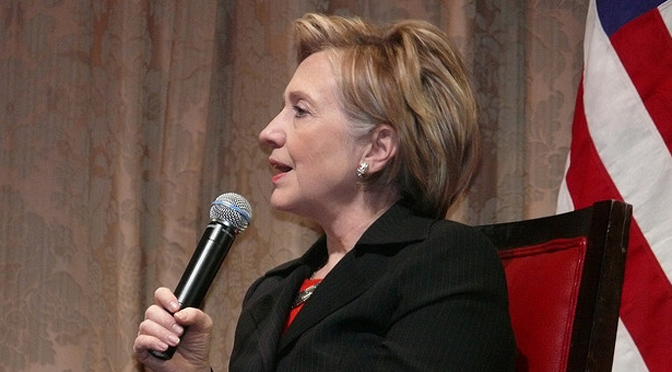 Hillary Clinton would be President if Planned Parenthood got to make that decision on its own. This is obvious from campaign financial records which show Clinton as the abortion giant’s frontrunner.

The former secretary of state collected nearly $10,000 from nine individuals who work for the country’s largest abortion provider, including from several high ranking executives at the billion-dollar operation. The first quarter fundraising total nearly matches the amount Clinton received over the course of her previous three political runs.

Unlike almost every Republican presidential candidate who has spoken out and condemned Planned Parenthood as a result of the new investigations, Clinton has not spoken at all, on either side.

Her opponent Sanders did, however. Sort of. In brief statement, Sanders, who admitted he did not watch the video, joined Cecile Richards in scolding Dr. Deborah Nucatola for her tone:

Obviously, I think Cecile Richards apologized for the tone of that video. I think her apology was exactly right. I think that the staffer, the tone was terribly wrong.

It’s an interesting comment since Sanders said he didn’t actually watch the video, and reading about tone in news coverage doesn’t show what the tone actually sounds like. But then, Sanders does have a 100 percent pro-abortion voting record. It seems his vote has been cast again.

Nevertheless, Sanders has broken the Democratic silence in the presidential race, becoming “the first 2016 Democrat to discuss the video,” according to CNN.

Planned Parenthood has supported the Democratic party in the past. It poured $18 million into outside spending groups in 2014 and 2012, according to the Center for Responsive Politics. Most of its nearly $6 million in direct contributions since 1990 have gone to Democrats. Every Democratic candidate except for Webb has benefitted from this cash influx at the federal level. Sanders and Chafee have received nearly $25,000 combined over the course of their careers.

It is no surprise that the Democratic candidates have not spoken about the allegations if they are benefiting from the profits of Planned Parenthood. Thus far, no Democratic candidate has made an attempt to distance him or herself from fetal parts sales in any substantial way.

Let us call on Sanders, who believes he is for the people, to take a stand for the most vulnerable people among us.

And let us call on Clinton, who believes she represents women, to represent the women who Planned Parenthood has lied to and preyed upon.