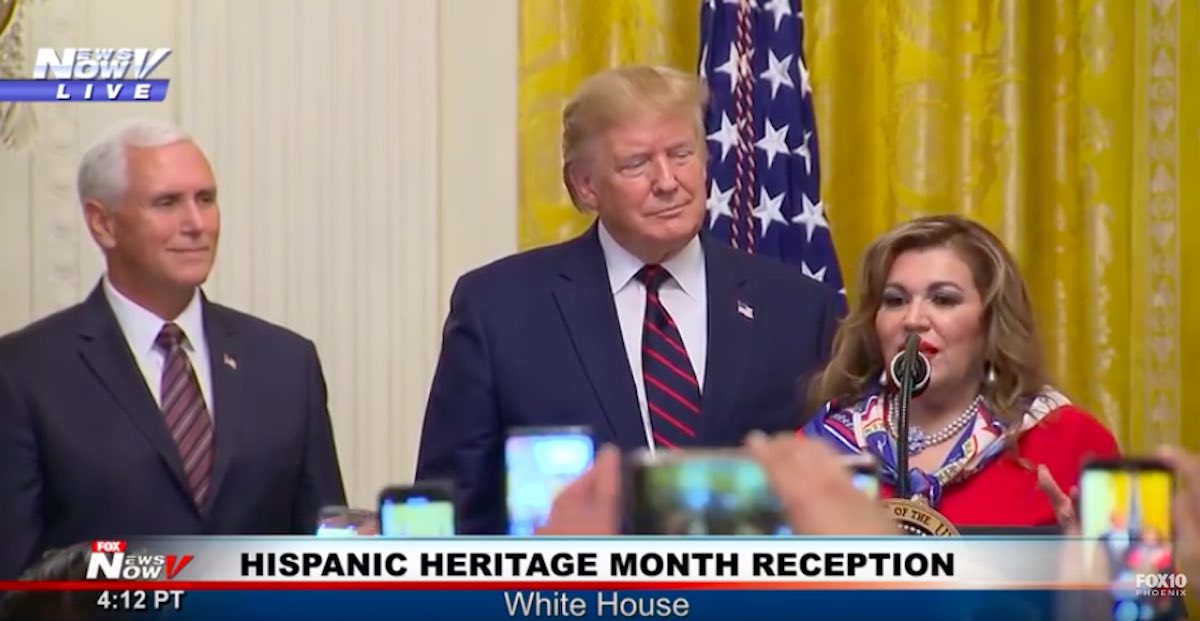 (Pregnancy Help News) “We trust in God and we cherish the dignity of every human life.” These are the words that President Donald Trump used to introduce a pro-life champion at a Hispanic Heritage Month Reception held Friday evening at the White House. President Trump and Vice President Mike Pence honored the lives of Hispanic Americans and the contributions they make to the country each day. In addition to the president, three Hispanic Americans had the opportunity to share about the work they do in front of a captive audience. The first female Hispanic-owned waste removal company in the United States, a border patrol agent and chaplain, and a pro-life pregnancy help clinic president.

Martha Avila just finished hosting Heartbeat of Miami’s annual Gala less than two weeks ago when she received word that she was invited to speak as a special guest of the President of the United States.

What started as a chance meeting with Vice President Mike Pence at a pastors’ meeting in July, evolved into an invitation to the reception, and ultimately, the chance to speak about the effects of abortion on minorities in the U.S.

With the world watching, Martha shared what the pregnancy help movement is doing to help women.

“Hispanic Americans and African Americans are minorities, and yet we form the majority of abortion in our country,” Avila said. “Over 3,000 pregnancy help clinics in the nation with very limited resources are doing this labor of love for those who don’t know what to do. They are confused. They don’t have a way out and they think that abortion is the only solution.”

Avila shared in her speech that one in two African-American pregnancies end in abortion. With Hispanic Americans, it is one in three.

Since it began serving women in 2007, Heartbeat of Miami has seen well over 35,000 women choose life for their babies in one of the most abortion-heavy cities in the U.S.

“We offer [women] the opportunity to parent their babies and the opportunity of a plan of adoption,” Avila added. “Pregnancy clinics are good for America and one day, abortion will be unthinkable in our country.”

Feeling very nervous as her time to speak drew closer, Martha grew confident in her role observing the audience.

“So many people were there and he chose Heartbeat of Miami,” she said. “He chose the pro-life movement!”

As the cameras were being packed up and the reception came to a close, the president came over and thanked Martha for speaking. He gave her a hug and offered a word of encouragement, saying “Please don’t give up.”

The vice president echoed his gratitude adding, “The Lord is pleased with your work.”

“Our president does stand for life – the life of the unborn and all life.” Avila said.