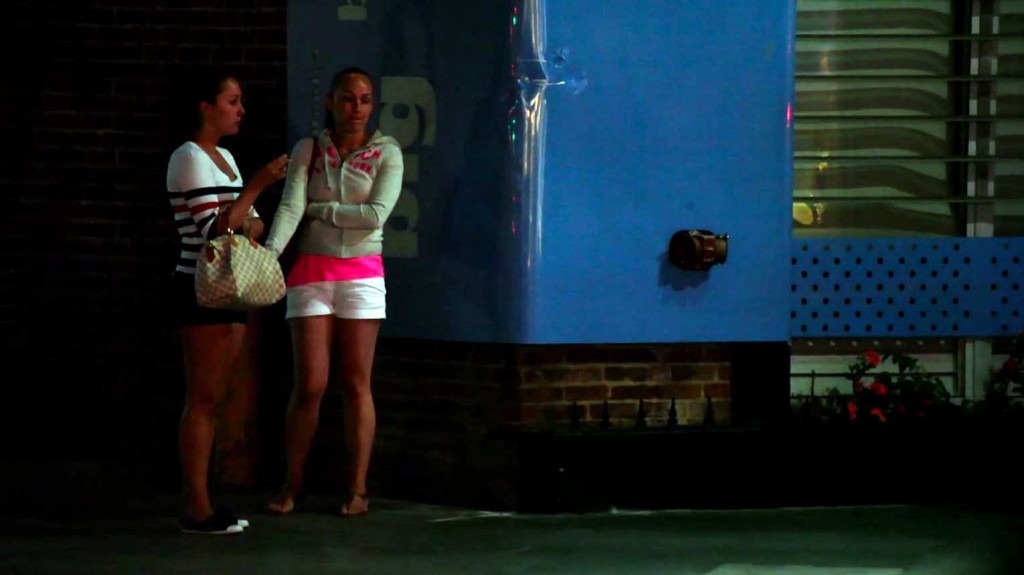 “I just knew that sex got me attention and attention got me something that I thought was close to love.”

These are the words of Danielle, a victim of human trafficking who began having sex for money at age seventeen. She tells her story in the documentary film “Tricked,” currently available to view on Netflix. “Tricked” is an eye-opening look inside human trafficking in the United States, and how public perception of prostitution is not grounded in reality.

Danielle’s story is gut-wrenching, but typical. Recently accepted to Northeastern University, the teenage Danielle thought she was dating a nice young man. He turned out to be a trafficker of young women. This is called “boyfriending in:” when a pimp courts a young woman as though he is a potential lover, then gradually convinces, manipulates, coerces, intimidates, or threatens her into earning him money as a prostitute.

Danielle started at an advanced age; most of the women her pimp was “running” began turning tricks at around age twelve, or younger.

“I started when I was eleven,” claimed another girl, who did not want her face shown. “I used to make like $1500 a night because I was young and I rocked the real petite body…”

“My pimp took my virginity and I fell in love with him,” she continued. “He was my first love. He was my everything. I called him ‘Daddy Daycare’ because had like nothing but minors in there.”

Many viewers who begin watching “Tricked” will quickly realize they, too, have been tricked. A pragmatic view of prostitution is common, thanks to the myth that women choose the profession willingly to earn money, and quit whenever they want. This is sadly not the case.

In April of 2011, a Washington Times article analyzed a newly released Justice Department report finding that 80 percent of human trafficking cases investigated by law enforcement between 2008 and 2010 involved prostitution.

“Any commercial sex act performed by a person under age 18 is considered human trafficking, regardless of whether force, fraud or coercion is involved,” explained the Times. Just as any sex act with a minor is a form of rape because they cannot legally consent, a minor working as a prostitute is by definition a victim of human trafficking.

Journalist Nicholas Kristof explains the nature of a pimp-prostitute relationship in “Tricked.”

“There is no business partnership. The pimps exploit these girls and control them and use violence in every city around the country… I think we sometimes have a kind of gilded view about what prostitution involves. One study found that workplace murder risk is 51 times greater [for prostitutes] than for the next most dangerous profession which is operating a liquor store. It’s hard to square that picture with this notion of prostitution as female empowerment.”

The only potential benefit of having sex for money – the money itself – goes directly to the pimp.

“It’s a lot safer to sell women than to sell drugs,” explained one trafficker.

Danielle agrees. “My pimp was never arrested. The johns are never arrested. I was arrested too many times to count… Nobody said to me, ‘Do you need to talk? Do you want to be put in a program?’… And then my pimp would come pick me up and I would be working again within a few hours.” “I don’t worry about it,” said one john, a man named Hugh who proudly displays his PhD diploma on his office wall. “It’s evolution. It goes all the way back. It’s very, very common. So if you ask me why do I pay for sex, it’s because I’m being human.”

“The advantage of paying for sex,” adds Hugh, “is I don’t have to worry about being charming.”

Though it’s difficult to come to a john’s defense, it’s true that part of the prostitute’s sales pitch is making their customers believe they enjoy their “work.”

“Honestly the johns believe everything you say,” said Danielle. “They believe you’re having a good time. They believe that you love what you do, that you love having sex for money, that I was a college student just trying to work through school or get some extra cash… that you’re just having a great time and really you’re, like, in hell.”

“They don’t look unhappy at all,” said Marc, another john, who hid his face from the camera to avoid his wife recognizing him.

Unfortunately the trafficking of minors is not on the wane, but growing continuously. One vice detective says, “When I first got to vice, it was few and far between that you would run across a teenage girl… and now it seems like it’s all the time.”

The filmmakers go on to explore law enforcement’s role in fighting the exploitation of women and minors in the human trafficking capitol of the U.S., Las Vegas. One undercover vice cop at the Las Vegas Police Department told the story of a pregnant teenage prostitute whose pimp “made her douche with bleach. It was very painful and when that didn’t work he beat her which caused the miscarriage… She had to undergo a full hysterectomy.” The girl was about sixteen at the time.

Robert Money, a pimp, explained why pregnancy was a problem for men in his profession.”Who want to buy [sex from a prostitute] and the belly stickin’ out like this?… It has to be in selling condition, selling order, you know?… You have to make sure the commodity is sellable.”

“I got every major credit card,” continued Money, producing a stack of cards and a bag of jewelry. “And I got a lot of problems, but money is not one of them.”

“Sometimes if I didn’t make the right amount of money I’d get beat with, like, extensions cords, bats, hammers,” said the young woman who began prostituting at age eleven. “He used to threaten me about my family like he’ll go kill them, he’ll kill me if I go back, he’ll blow my house up.”

Threats against family are par for the course for human traffickers. These threats, plus the intense shame felt by victims once they begin having sex for money, plays a large role in keeping trafficked women and girls from fleeing their captors and returning home.

Brooke, like many teenage trafficking victims, met her pimp on Mocospace.com. She agreed to meet him in Las Vegas, imagining a whirlwind getaway with a new boyfriend. “The third morning, that’s when s**t got real,” she said. “He started talking to me like I wasn’t a person.”

Her captor forced Brooke to call her family and say she was safe and having a good time. “I really, really, really didn’t want to get hit. That’s all I was trying to do was not get hit.”

“I felt so ashamed because I knew on that third day what he was trying to make me do,” said Brooke. “‘You’re gonna be a whore, you’re gonna be my ho… and you don’t have any [expletive] say in it because I’ve already got you here.'”

“I just wanted my daddy.”

Eventually Brooke was able to leave her trafficker and return home to her father. Many young women are not so lucky.

Las Vegas Vice Detective Chris Baughman cautions parents against allowing their children unrestricted access to the Internet. “The days of the daughter… being a runaway, being a drug addict, being a neglected child, we’re past that. They’re going after people’s daughters from every walk of life.” In other words: most young women being trafficked today, especially in Vegas, were trafficked before they ever hit the street, thanks to the Internet.”You needed a key to get out,” recalled Cindy, the former “high-class” escort, of her captivity. “He took all our phones.”

According to the film, many factors contribute to the growing problem of human trafficking in this country, from former victims too scared to speak out, to an increase in Internet access for younger children. One vice cop said, “We’re arresting the wrong people, quite frankly,” pointing to an unfortunate emphasis on criminalizing the victim rather than focusing on pimps and johns.

Fortunately, films like “Tricked” are part of the solution. Its presence on Netflix is helping make a largely clueless public aware that behind the facade of “the world’s oldest profession” we do not find much of the stereotype: hard-bitten, pragmatic, tough-minded working girls plying a distasteful trade so they can reap the financial benefits. Instead, we find victims. We find, in large part, female minors and minorities who have been tricked, beaten, intimidated, manipulated, and forced into selling their bodies not for money – that goes to their traffickers – but for a few more hours of respite from harm.

Danielle, though she was raped, sliced open with a knife, and beaten repeatedly, is one of the lucky ones who was able to escape her trafficker and move forward. Jamie, Danielle’s mother, articulates her rage and horror at her daughter’s abuser: “There’s no difference in my mind between somebody who murders and somebody who kills someone’s soul. And that’s what he did. He stole that from a child.”

The indelible scars on her psyche are apparent as Danielle tells the horrific stories of her days as a victim of human trafficking. “I feel sad for that person,” she says, “but that person is me.”