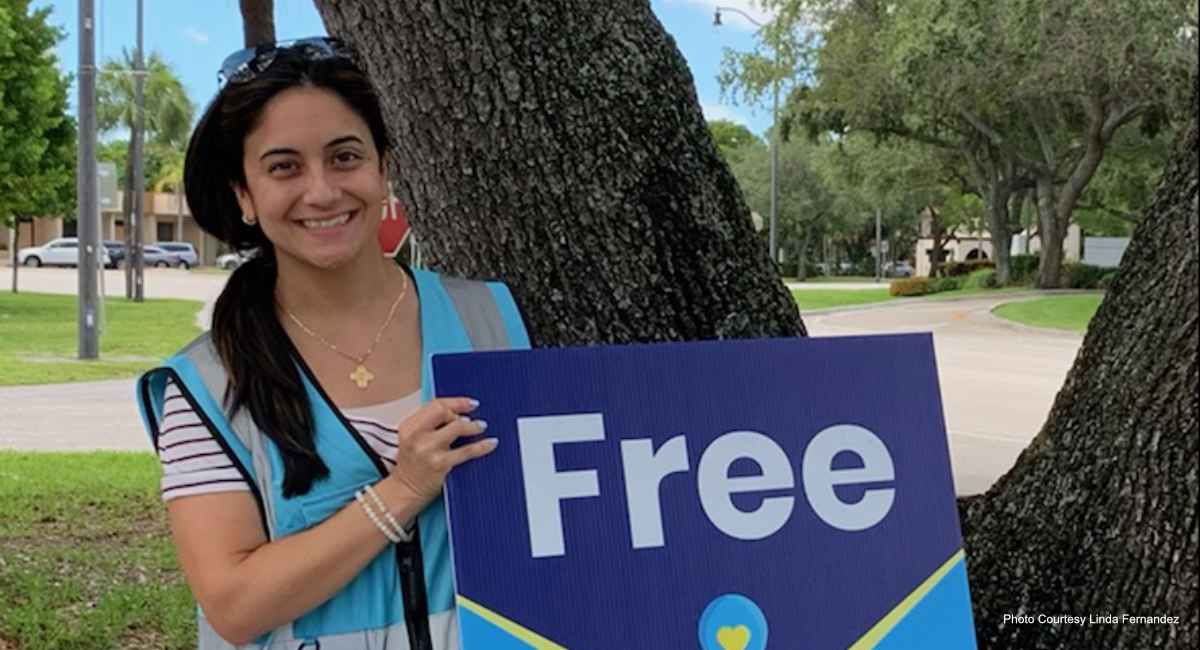 At age 24, Linda Fernandez socialized with friends for whom the college experience was about getting drunk, being promiscuous, and finding comfort from liaisons with men. This way of life was attractive to Fernandez who always tried hard to win love from those around her as a way to deal with a traumatic childhood experience.

Fernandez told Live Action News, “I was so young, just six years old at the time this [trauma] happened. I couldn’t tell anyone about it, so all my life I tried to take charge and be rebellious. It was a way to handle my secret shame.”

But Fernandez’s lifestyle soon caught up with her. Waking up nauseated one morning after a late-night party, she drove to a drug store to purchase four pregnancy tests, all of which were positive.

“I was so scared and angry,” Fernandez said. “I started crying and screaming at the man who got me pregnant. I didn’t know what to do.”

Battling the horror of a chemically induced abortion

A friend told Fernandez about an abortion facility that “could take care of her problem.” She was assured it would be a quick, painless procedure and she could go back to her old life unencumbered by an unplanned pregnancy. When she was told the cost was $600, she demanded her baby’s father fund the abortion.

On a Saturday morning, her hands tightly gripping the steering wheel, a frightened Fernandez drove herself to the facility.

Fernandez said, “I remember feeling extremely cold and that the people at the reception desk were so detached. They seemed only interested in taking my money and gave me an information sheet to complete. I cried as I filled out the form.”

Before going in for the procedure, Fernandez needed to drink more water for her ultrasound, which required her to head back out to her car.

“I kept looking around the parking lot to see if anyone was watching me. I felt so ashamed,” she said.

After going inside and lying on the exam table, a weeping Fernandez asked to see the ultrasound image but was told “there was nothing there.” As her blood was drawn, Fernandez persisted, asking the nurse if she was doing the right thing; the nurse assured her she was. She was given pills to swallow to start the abortion and was discharged.

Fernandez said, “Driving home, I started having agonizing contractions and bleeding. The pain was so intense that I vomited in my car and lost control of my bodily functions. I pulled over, put my seat back, crying and praying for someone to help me. I called the clinic, and they told me to come back.”

Back at the abortion facility, she was given a sedative and fell asleep. After a short while, she was awakened by staff and told to go home.

“I was filled with trepidation at the thought of going to my parents’ house,” Fernandez said. “I just couldn’t tell them what happened, but I had nowhere else to go, so reluctantly, I went.”

Still battling intense pain and bleeding, Fernandez crawled to the front door. As her mother met her at the entrance, Fernandez tearfully declared, “Mom, I’m a sinner!”

Fernandez’s mother helped her to bed and encouraged her to rest. But she woke up periodically throughout the night for trips to the bathroom. What she saw in the toilet bowl horrified her. Lying in bed reading an article about women receiving healing and forgiveness by returning to church, she told her mother she didn’t think Jesus could forgive her.

Forgiveness and compassion lead to healing

Despite her misgivings, Fernandez said, “I got down on my knees and asked the Lord for forgiveness, wondering how I would ever forgive myself. The next day, I went to Confession and to get guidance from the priest.”

There, Fernandez was met with compassion and understanding. The priest showed her the crucifix and reminded her that Christ died for all sinners. He gave her a pamphlet with information on Project Rachel and Natural Family Planning, urging her to commit to the healing process.

“That was the beginning of my healing journey,” Fernandez said. “As many post-abortive women do, I had vivid dreams about my baby and knew I had a son. I named him Joshua, which was a huge part of my healing, to recognize that I had a child and that my child was in heaven praying for me.”

Fernandez learned to process the anger she carried for the abortionist, the father of her child, and all those who had hurt her. Doing this gave her the freedom to love and forgive, and help others in need.

Finding her purpose in pro-life ministry

While pursuing her doctorate in physical therapy, Fernandez went to Utah for one of her rotations. There, she contacted Pro-Life Utah and participated in a March for Life event. She met a young leader with Sidewalk Advocates for Life and completed the required five hours of training.

The next day, she was at Planned Parenthood when she saw a young woman driving onto the property. Fernandez noticed the woman’s hands trembling as she clutched the wheel of the car. Suddenly, the woman looked at Fernandez and their eyes met. As she got out of her car, Fernandez engaged with her.

“I told her that I knew she was scared, but that I could help her, that she did not need to go into that Planned Parenthood building, Fernandez said. “I gave her the information for the pregnancy support center and told her I’d contact them for her. I directed her where to go. She started crying as she got back in her car.”

That encounter left an indelible mark on Fernandez’s heart. This is what I must do back home in Miami, she thought. Later, she had lunch with Lauren Muzyka, President and CEO of Sidewalk Advocates for Life, who told Fernandez she was meant for pro-life ministry. She contacted Fernandez again to urge her to work in the pro-life movement, telling her she came up in prayer. Shortly thereafter, Fernandez joined Sidewalk Advocates for Life, serving as Regional Programs Manager – East.

“My life’s work now is to reach the hearts of women,” Fernandez said. “We must be compassionate to those who are hurting. Women need to know about healing and redemption. If we can’t save the mother, we will not be able to save the baby. I hope to be a beacon of light to women in crisis.”