Last month, controversial Blaze TV pundit Tomi Lahren got herself into some major hot water when she appeared on talk show The View and declared herself “pro-choice.” That in and of itself may not have been too shocking, were it not for the fact that Lahren also smeared conservative pro-lifers as hypocrites.

The backlash was swift: Lahren was suspended from The Blaze and took her show off the air; she responded by suing the media outfit as well as her boss, Glenn Beck. The Blaze responded in a statement saying, “It is puzzling that an employee who remains under contract (and is still being paid) has sued us for being fired, especially when we continue to comply fully with the terms of our agreement with her.”

Now, Lahren is fighting back. This week she appeared on ABC’s Nightline, where she said that she wanted the freedom to be able to “put my voice out there.” “Without that, I feel lost,” she said of her show on Blaze TV. “When your outlet is taken away from you, when your catharsis is stripped from you and you don’t understand why and you’re so disappointed and you’re so blindsided by it, it hurts.”

She also reiterated her pro-abortion stance, as seen in the following video:

.@ABC Nightline EXCLUSIVE: @TomiLahren addresses her pro-choice comments on @TheView that she says led to @theblaze shutting down her show. pic.twitter.com/HtntLjFqET

“I believe you can be anti-abortion and pro-choice, and that’s where I sit. Personally, I would never have an abortion. Personally, I would never encourage anyone else to have an abortion. In fact, I’ve counseled friends against it. I don’t believe in abortion. However, as someone that views limited government, I do believe that during the first trimester, that option should be there for women. And I stand behind that. Now, after the first trimester, that becomes a little more difficult for me, and I do believe the government has a role when the baby is viable on its own. But during that first trimester, I think we need to approach these issues with the utmost compassion for young women that are going through an experience that luckily I’ve never had to go through.

Yet again, Lahren gives an inconsistent and illogical argument. Saying that she is personally anti-abortion while wanting abortion to be legal is, in essence, the “personally pro-life” argument. The problem is that there are no other circumstances under which anyone would argue that they are “personally against” the taking of an innocent life, but support other people’s decisions to do so. No one would say that they’re “personally against” shooting someone in the head just because they feel like it, but support the right of other people to do so. The only reason people make the “personally pro-life” argument is because in the case of abortion, we’re talking about preborn children. Preborn children don’t differ at all from born human beings, though; the only difference is their location, their size, and their level of development.

As Calvin Freiburger explained, there also is no libertarian or limited government defense of abortion, which is the tack that Lahren tries to take yet again in her Nightline interview. The problem with the argument is simple: you can’t argue in favor of individual rights while also arguing to deprive human beings of their right to life.

Part of the reason Lahren, and many like her, likely feel comfortable arguing in favor of abortion in the first trimester is because — as Lahren herself says — the baby is not yet viable out of the womb. The problem with that argument is that viability has no effect on humanity. Preborn children, including in the first trimester, are living human beings. Science has made that very, very clear. 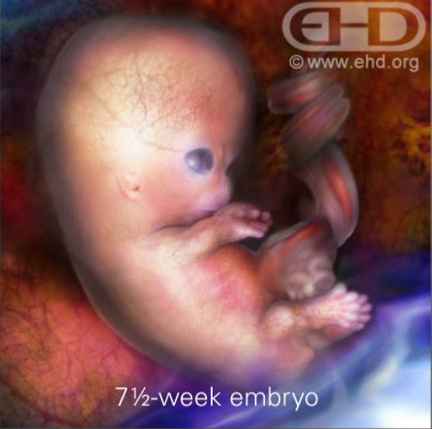 A unique human person who has rights

From the moment of conception, the science of embryology shows us that the preborn baby is alive, separate from his or her mother. At the moment of conception, the baby already has his own unique DNA. The heart begins beating extremely quickly, by 21 days after conception — in many cases before the mother even knows she is pregnant. Recent scientific evidence shows that it might even begin beating earlier, as soon as 16 days after conception. By just six and a half weeks, the baby has measurable brain waves. By 10 weeks, the baby has his own unique fingerprints; if the baby is a girl, she already has her own tiny ovaries and uterus.

And all of this development takes place in the first trimester. The preborn baby might not yet be viable, but there is no way to scientifically deny that the baby is alive — a living organism. Arguing in favor of first trimester abortion is, in essence, arguing that it’s acceptable to kill someone because he depends on someone else for survival. An infant, or a person with a severe disability, also meets that same qualification — is it acceptable to kill them? Of course not, but it should also be unacceptable to kill a preborn child just because he or she temporarily resides in the mother’s womb.

To make it worse, first trimester abortions are violent for the human being who is being torn apart, as former abortionist Dr. Anthony Levatino explains:

Lahren does get one thing right: we should approach abortion-minded women with utmost compassion and love. But is abortion the compassionate thing for women in any way? Women facing crisis pregnancies need help and resources; they don’t need to be put through a violent procedure that takes an innocent life, and is known to carry high risk for immense psychological trauma. The overwhelming majority of medical literature affirms that abortion brings with it higher risk for numerous mental health disorders, including depression, anxiety, suicidal behavior, and drug and alcohol abuse. Abortion is not a compassionate option.

Tomi Lahren, once again, has displayed a fundamental misunderstanding of the subject of abortion. She calls herself anti-abortion, but you cannot argue in favor of keeping abortion legal as an “option” for women and still claim to be truly against abortion. Hopefully, in time — and after she’s maybe tried reading a few books, like this one — she’ll come to understand the reality of abortion, and why it is not a simple “choice” that should be allowed by our society.