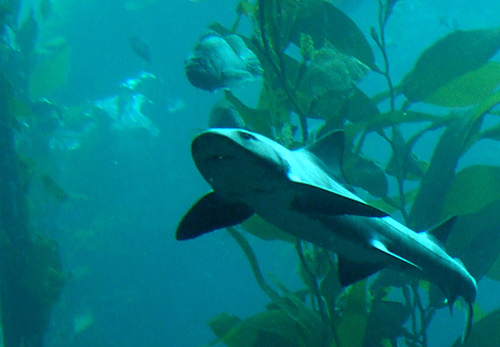 Namely, that they are what they are. This should go without saying, but… 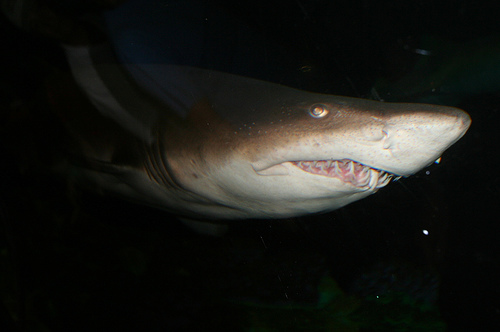 No, really, they’re much cuter than this shark. Check them out here. (Photo credit: eschipul on Flickr)

You may be pleasantly surprised to learn that researchers have been studying shark embryos in Australia – specifically brownbanded bamboo shark embryos. Honestly, I’d never heard of these sharks before, but they’re pretty cute. The truly amazing thing, though, is what the researchers have discovered.

These shark embryos react to and hide from predators! Seriously, isn’t that just awesome? What some might term “potential sharks” are showing by their innate abilities – as an embryo – that they are really, truly real sharks. They’re not merely “potential” for future shark life. Here are the details, explained by Ryan Kempster, shark biologist:

Embryonic sharks are able to recognise dangerous stimuli and react with an innate avoidance response. …

This is the first study that shows a shark embryo’s ability to detect and ‘hide’ from a predator by staying completely still and stopping its breathing.

How exactly did the researchers discover this previously unknown skill in the shark embryos? Well, the BBC – usually on top of unique news stories – reports the process:

By simulating the electric fields given off by predators in a water-filled test tank, the team found the embryonic sharks responded by stopping movement of their gills and staying very still.

And if the embryos continued to be exposed to these electric fields when they needed to start breathing again, they did so at a reduced rate of movement of their gills, suggesting they were ‘hiding’ from the perceived predator.

Pretty amazing, huh? I remember watching plenty of shark shows as a kid (National Geographic, Discovery Channel – not Jaws), and I don’t remember anything this cool. Even as an embryo that doesn’t even really look like a shark yet, these sharks are helping to show the world the reality of what the unborn can do and how alive and skilled they truly are.

Of course, this applies to human embryos as well. (Surely you didn’t think you’d just get to read a nice story about sharks today, right?) Unbeknownst to human beings just years ago, today we’re very aware of what human embryos and fetuses are capable of in the womb. And we keep on discovering more. Each new discovery helps to prove beyond a shadow of a doubt that unborn humans are not just potential life. They are the very embodiment of life itself.

Here are a few facts:

The clip begins with an ultrasound of the fetus (girl) who is about to be aborted. The girl is moving in the womb; displays a heartbeat of 140 per minute; and is at times sucking her thumb. As the abortionist’s suction tip begins to invade the womb, the child rears and moves violently in an attempt to avoid the instrument. Her mouth is visibly open in a ‘silent scream.’ The child’s heart rate speeds up dramatically (to 200 beats per minute) as she senses aggression. She moves violently away in a pathetic attempt to escape the instrument. The abortionist’s suction tip begins to rip the baby’s limbs from its body, ultimately leaving only her head in the uterus (too large to be pulled from the uterus in one piece). The abortionist attempts to crush her head with his forceps, allowing it to be removed.

We cannot remain silent about the extreme cruelty that is committed daily against tiny unborn babies.

A “hat trick” is three successes. We’ve covered the success of the Australian researchers; we’ve talked about the growing successes in revealing the humanity of the unborn child in the womb; the third success is up to you. Will you help educate your friends and family about the hidden unborn children of the world? Send out an e-mail, write a blog, a tweet, or a Facebook post, and let the people in your life know about the incredible development of unborn children.

Don’t let another day go by without showcasing their amazing humanity to the world.