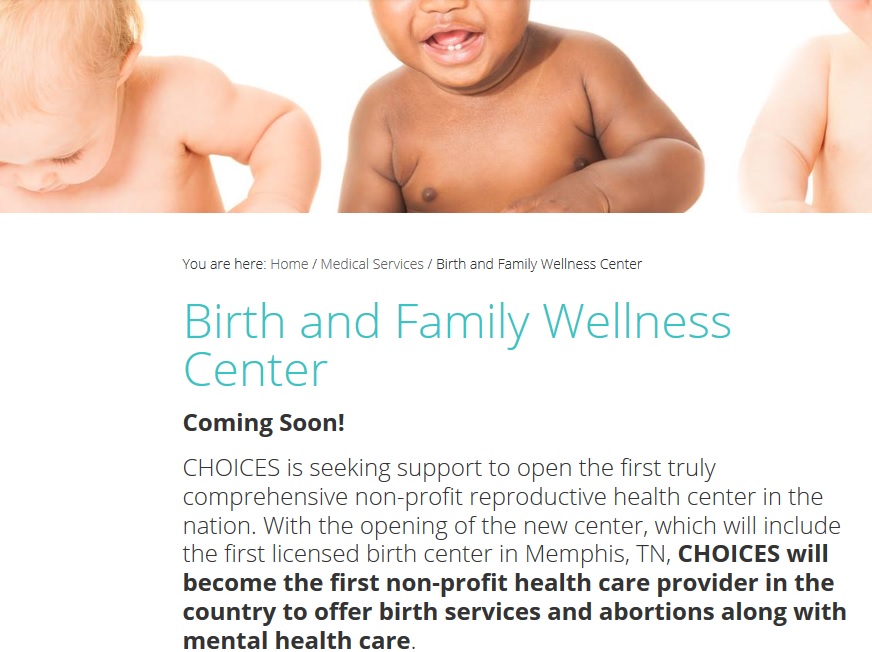 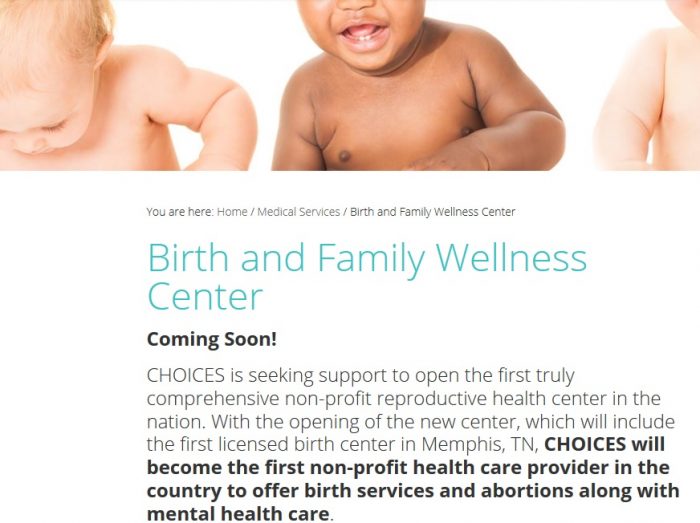 A Tennessee abortion facility has announced its plans to open a birthing center, under the same roof where abortions take place. The Memphis Center for Reproductive Choice, also known as Choices, recently published the idea on its website:

CHOICES is seeking support to open the first truly comprehensive non-profit reproductive health center in the nation. With the opening of the new center, which will include the first licensed birth center in Memphis, TN, CHOICES will become the first non-profit health care provider in the country to offer birth services and abortions along with mental health care.

Choices commits abortions in the first and second trimesters, up to 15 weeks of pregnancy.

The notice continues, revealing the fact that the abortion industry completely neglects to mention the life or care of the child, even when referring to birth:

American women are in poorer health when they become pregnant, and are failing to get proper care. Through a full range of direct services the new center will reflect and serve the reality of women’s lives – that the women who at one moment in their lives need safe respectful care when they give birth may at another time need safe and respectful abortion care and who may at another time require sensitive, culturally appropriate mental health services. 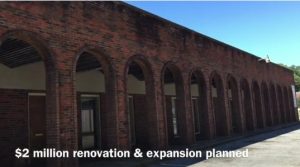 According to a local Memphis media outlet, the birthing center and abortion clinic will be located under one roof, inside a newly purchased $285,000 facility, which the clinic plans to renovate for $2 million. The one-story office building located at 1203 Poplar in Memphis was purchased in April of 2016.

Choices is operated by executive director Rebecca Terrell and medical director Dr. Donna Randolph as well as the clinic’s director of obstetrics and ambulatory gynecology, Dr. Susan Lacy, a board certified OB/GYN who was recently hired. Choices has been in the abortion business since 1974, but despite their noble suggestion that they were the “first” to develop the idea of a birthing center and abortion facility under one roof, they were not.

While Choices may be the first non-profit abortion facility to do this, the privately owned, New York-based Buffalo Womenservices abortion facility opened a birthing center a few years ago. The facility is operated by Dr. Katharine Morrison, who told the Buffalo News, “I see a connection between respecting a woman’s right to decide to end a pregnancy and her right to determine how she has her baby.”

Rewire (formerly RH Reality Check) described the day to day duties of the abortionist at the New York facility this way:

On any given day, Morrison bounces back and forth between the birth center and the rest of the practice, performing first- and second-trimester abortions, testing for and treating sexually transmitted diseases, providing contraception and Pap tests, and meeting the gynecological requirements of several thousand patients a year.

According to Rewire, at the time the NY facility opened (2014), there were facilities in Kansas, Ohio, and Tennessee exploring the idea of doing the same — which brings us back to Choices.

After learning about the abortion/birthing center, AFA journalist Anne Reed put her thoughts on paper and may very well have written what many Live Action News readers are also thinking: 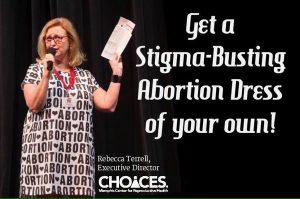 Imagine arriving in the lobby of the new Choices facility. A sign-in sheet awaits you with the words, “Which version of our team would you like to see today? Would you like a cradle or a grave for your baby?”

It is difficult to imagine that the staff of an abortion clinic would or could be interested in delivering live babies.

How can the same person who participates in the violent dismemberment of a baby help to deliver a baby safely and compassionately? How can the person who puts the dismembered baby body parts back together, then scrapes them into a red plastic bag labeled “infectious waste,” also gently wrap a tiny, crying newborn in a blanket and hand her to her mother?

How can the executive director who has proudly sported a dress with the words “Love abortion” woven into the fabric wear a heart of compassion toward mothers who value their babies and themselves? Can she value life and love murder? Can she separate herself into two personalities – one evil and one good?

The facility is currently looking for “an experienced Certified Nurse Midwife” to operate the birthing center, describing their ideal candidate as “a creative, pro-choice clinician who will be energized by working in a collaborative team practice model alongside our CNMs and OB/GYNs. Full scope midwifery.”

In 2016, Tennessee state lawmakers approved the Fetal Remains Act in response to concerns raised regarding the selling of human fetal tissue. The law requires fetal disposition to be reported to the state and requires the mother’s authorization for disposition of the fetus that results from a surgical abortion to be included as part of the informed consent process prior to the procedure. In addition, the law adds language to make clear that reimbursement for any costs associated with the preparation, preservation, transfer, shipping or handling of an aborted fetus or fetal tissue is also a Class E felony.

According to the latest reported abortion statistics from the Tennessee Department of Health, there were 2,914 abortions reported in Shelby County, a decline of 36.6 percent between 2011 and 2014. Pro-life groups point to legislative restrictions on abortion as well as outreach to pregnant women as a reason for the decline. Campaigns like the one that brings mobile ultrasounds to pregnant women so they can “see the humanity of their unborn child” have prevented many abortions, according to Brian Harris, president of Tennessee Right to Life.

One has to wonder whether a facility that kills children as well as births them could find it remotely possible to “see the humanity” of preborn children. It seems hard to fathom.