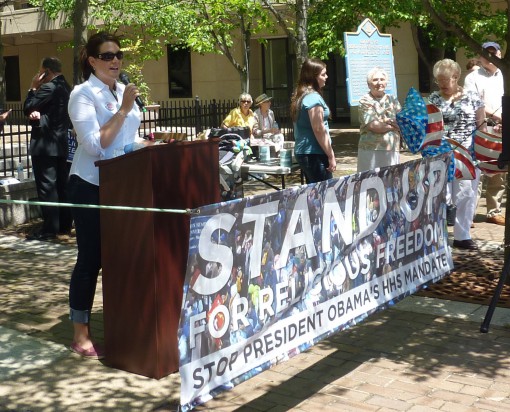 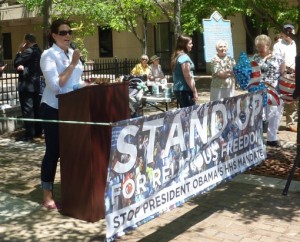 It has been almost nine months since the United Stated Department of Health and Human Services introduced its new mandate (now referred to as the “HHS mandate”) requiring most private health insurances plans to provide “all FDA-approved prescription contraceptive drugs and devices, surgical sterilizations and abortion-inducing drugs—drugs that interfere with implantation in the womb and therefore destroy the life of a human being in the earliest stage of development.”  The mandate requires some employers to go against their faith by being forced to pay for these services for their employees, therefore violating the right of U.S. citizens to enjoy religious freedom.

Stand Up for Religious Freedom has planned a third nationwide rally to take place this Saturday for citizens to peacefully protest how the HHS mandate encroaches upon freedom of religion. Two previous events, held in March and June, saw over 300 rallies across the United States with over 125,000 people participating.

A list of locations for Saturday’s event can be found here. Most of the rallies start at noon (local time), but check the list, as some start earlier or later. Here is what you can expect if you attend a rally:

Each of the October 20 Stand Up for Religious Freedom rallies is being locally sponsored and organized, so no two are quite alike. However, you can expect to see colorful signs and banners at the Rally, hear inspiring speeches about fighting the current attacks on religious freedom like the HHS Mandate and join in hymns and prayers for our nation.

Religious Freedom and the HHS Mandate: The Backstory

When the mandate was being created, the government asked the Institute of Medicine to suggest “preventive services for women” that should be included. Stand Up for Religious Freedom reports that “[r]esearch conducted by Human Life International has revealed that every member of the IOM committee heavily biased in favor of legalized abortion—some with direct ties to abortion advocacy groups. Not a single member was pro-life, much less had any qualms about contraception and sterilization.” This created a mandate with narrow exemptions that forced the providing of contraception, sterilization, and abortion-inducing drugs regardless of religious belief.

While there is a “religious exemption” to the mandate, it is in all practicality worthless. The religious exemption was so narrowly drawn as to exclude most groups, making religious employers “exempt only if their purpose is to inculcate religious doctrine, they hire and serve exclusively people of their own faith, and they qualify as a church or religious order according to a very narrow definition in the tax code.”