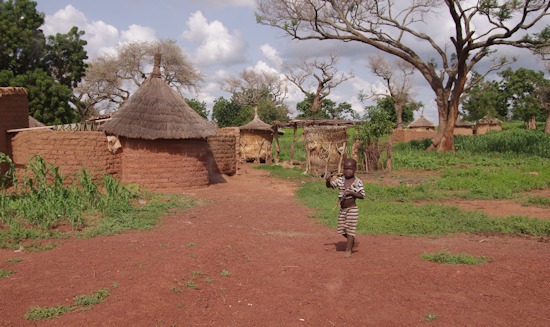 It is 6 am.  Melissa Brooks opens the door to take out the garbage and is met by cool air, the fresh scent of morning dew, and the delights of autumn.  Just like home – their old home.  Until one walks just a block away from the front gate, and the illusion of their “old home” vanishes.  Ditches along the side of the road filled with raw sewage – some of it human; garbage strewn across the streets from where the starving and homeless have desperately searched for scraps of food; children, many without shoes and some wearing only a shirt, playing in the scattered trash; handicapped men and women begging for help on the street corners next to others carrying metal baskets piled high with produce, and children running small fruit stands.  This is Burkina Faso, and it is nowhere near the old, United States home of the Brooks family.

Burkina Faso is a landlocked country in West Africa and home to around 18 million people including Melissa, her husband Isaak, and their two young girls, Sydeleigh and Marvelly, for a little more than a year.  Isaak is in the military and when a job opened up at the US Embassy in Ouagadougou, the capital of Burkina Faso, the couple saw the opportunity as a gift from God – a chance to learn and minister in ways that many Americans will never have.   “Of course” Melissa explains, “Isaak’s daily job involves working at the Embassy, and our family supports him and the mission of our country in Burkina Faso. But personally we live to glorify Christ and serve Him by serving others…in whatever avenue that may be here.”

In a country like Burkina Faso, one of the five poorest nations in the world, where the average daily income is less than $2.00/day, the needs and chances to serve are painfully clear.  “Poverty is everywhere” Isaak recalls.  “It is not the nice poverty we have in the states, it is extreme poverty. It is people who have brown hair to due malnutrition or who have no shoes, or shorts, or shirts to wear. This kind of poverty has people walking many kilometers everyday to find clean water. This poverty has people begging on the street out of sheer desperation or digging through garbage for scraps. People will go without medical treatment because they can’t afford the $4 for the exam and the $3 for the medication. You will not get treated if you do not have the money. You will literally die in the hallway of a medical facility from lack of treatment.”  The desperation is unlike anything the average American could fathom, and often leads to equally desperate measures.

Exploited and abandoned children are perhaps the most difficult situations the family witnesses.  While the government frowns upon and criminalizes child labor, encouraging education in its place, the reality for many families is often far removed from the government’s official position. In the face of such extreme poverty, paying to send a child to school can seem a senseless option when that same child can work in forced labor and help support the family, a situation that has lead Burkina Faso to be named in the US Department of Labor’s report as one of 19 countries engaged in the worst forms of child labor.

The Garibout system is another facet of child exploitation that the Brooks have personally witnessed.  In a country largely Islamic in its religion, it is common for parents to send their child, many as young as five years old, to live with an Islamic teacher known as a Marabou, who will educate the child in the Arabic translation of the Koran in exchange for the child spending hours in the streets begging for food, money, or some other tangible good.  Children who do not meet their daily quota are beaten, denied food, or otherwise punished, with the younger children often suffering double as their day’s “earnings” are routinely stolen by older children desperate to avoid punishment themselves. 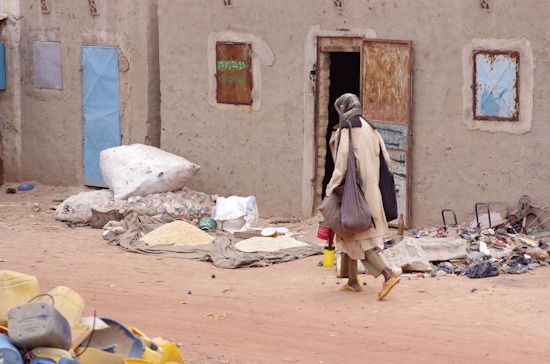 Poverty and lack of education can also force parents to take desperate measures with newborns they cannot feed, or who are born with a handicap.  Child abandonment is a devastating reality the family has witnessed firsthand, often resulting in death from starvation and exposure.  Newborns with obvious handicaps are commonly taken to the village’s witch doctor under the mistaken belief that the child is cursed, where the child will be kept in the witch doctor’s hut overnight so the witch doctor can observe the infant, allegedly to see  if it becomes a snake in the evening.

A child which does not turn into a snake will be returned to its parents, but one who does will be killed by the doctor – the only outcome some friends of the Brooks, who have been missionaries in Burkina Faso for years, have ever actually seen take place.  While the country is officially predominantly Muslim, animist beliefs play strongly in the culture, and a large amount of Burkinabe still identify with those beliefs, even those who also claim Islam as the household faith.

Those who are mentally ill do not fare any better.  Some are medicated to the point of being in a nearly vegetative state, while the rest will be rounded up and driven out of the town or village and left in the desert, only to find their way back eventually for the process of removal to begin again.

In light of such extreme poverty and desperate circumstances it would be easy, and certainly far more comfortable, to withdraw from witnessing such suffering, but “closing your eyes to it all doesn’t change the facts” Melissa points out.  It also doesn’t make one any less responsible to act.  “I love Jesus. And I want to care about the things in this world that He cares about. The Bible makes it very clear all throughout scripture that we are not to oppress the vulnerable. And I want to live my life loving the vulnerable.”  Yet what can one American family do in a country of 18 million?  The same thing everyone has the opportunity to do:  serve and love through whatever God brings their way. 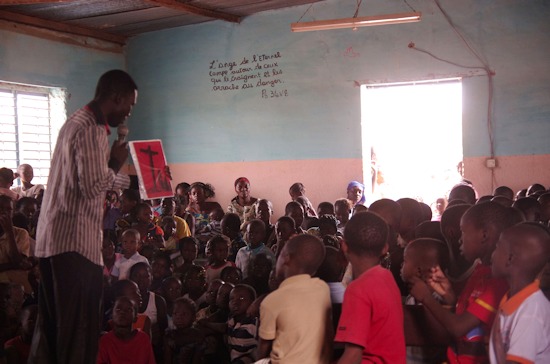 For the Brooks, that means storing bagged water at the front gate of their home to give to people who knock on the door begging for help, keeping crackers and flip-flops in the car so they can be easily put into a child or beggar’s outstretched hands, purchasing trinkets that people are selling in an attempt to earn money for that day’s food, and simply being ready to meet needs wherever God might lead.  .  It also means actively pursuing ministry, and spreading the truth about the desperate needs of so many, especially Burkina’s orphans.  Melissa and her daughters have volunteered at a ministry for Garibou boys, and go to the local orphanage twice weekly to spend their mornings serving some of Burkina’s most wounded children.  The family does what they can to connect with local missionaries and learn about the needs of the people, and the best ways to serve them.  Essentially, they determine to make themselves available to be used by the Lord in whatever way, large or small, He places before them that day, and to view those they meet with compassion and grace, knowing the people they are learning to love dearly have faced circumstances those of us in the West could likely never fathom.

Then they do what is perhaps the most important – pass that conviction and servant’s heart to the next generation, the children they are raising.  Involving their girls in serving others is only the beginning, teaching them why is the ultimate goal.  “I want them to learn that ‘Rich and poor have this in common: The Lord is the Maker of them all’  God created us all. God loves us all”, Melissa exhorts.  “I want them to learn what the Bible means by “Love the Lord your God with all your heart and with all your soul and with all your strength and with all your mind’; and, ‘Love your neighbor as yourself.’. . .I pray every day. . .that where my influence and abilities stop…God would take over and speak truth and encouragement and counsel into their hearts and teach them how to love.”  The family will soon have yet another way to demonstrate the gospel, as they complete the process of adopting a young boy from an orphanage in Burkina and bring their first son into the family.

For those of us in a first-world country, where it is certainly easier to close our eyes to the needs all around us, the Brooks urge, “you don’t have to live in a third world country to get involved. . .It is not hard to help!  What we do at home and in our communities has just a great of an impact as those who live overseas. It is all worthy. God can use us anywhere we’re at.”

The couple points out that God has no problem opening doors to love others – it may be something as “simple” as volunteering and mentoring at a crisis center for youth, as Isaak did before the family’s move.  It may require some initiative, as Melissa discovered when she began a photography ministry for families graduating from substance abuse programs, homeless shelters and foster programs.  Perhaps taking one’s kids to a local nursing home and teaching them to love the elderly, or bringing food to those living on the streets in the inner city.  There is no limit to what God can do with a willing heart, nor a limit to the opportunities one can find to love.  After all, Melissa exhorts,  “Jesus came so that all people might come to know Him and have a relationship with Him, so that all people can experience the freedom of His saving grace. . .God does not hide His heart for both the physically and spiritually oppressed. And if God cares about it, we ought to too.  Our love for Jesus should compel us to serve others. Period. It really is that simple.”

There are many opportunities to partner with missionaries in Burkina as well, helping provide the resources for necessities like clean water, educational supplies and a wide variety of other needs, if you feel led to learn more about this country and serve its people.