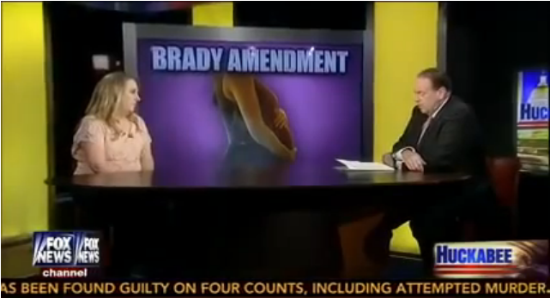 Something special is happening in Colorado.

Coloradans are preparing to vote on the Brady Amendment, which would “include unborn human beings” in the definitions of the words “person” and “child.”

You see, in July of 2012, a drunk driver slammed into eight-month-pregnant Heather Surovik’s car.  Heather survived, but her baby, Brady, did not.  Thanks to the ambiguous legal situation in Colorado, the state refused to recognize Brady, who was just a few weeks from being born, as a person.  The man who killed this child was charged only with assault against Heather.

Since then, Planned Parenthood and other abortion zealots have further poisoned Colorado’s legal system, making sure that no pre-born child in Brady’s situation can ever receive justice – to say nothing of the thousands of children gruesomely destroyed every day by abortion.

But the Brady Amendment will fix this offensive state of affairs.  As the Colorado Court of Appeals ruled in 2009, “this is an area that cries out for new legislation.”

Of course, the fact of the matter is that legislation like the Brady Amendment should not be necessary, because science tells us beyond a shadow of a doubt that the child in the womb is a human person.  At the moment of conception, a unique, living human being is formed, with his own DNA, growing and developing.

If Brady had been outside his mother’s womb during the car crash, that drunk driver would have been charged with murder.  But are we different people depending on which side of the birth canal we occupy?  Do we become “non-persons” just because we are more dependent on our moms?

The Brady Amendment is about basic human rights – about what, fundamentally, makes us people.  Because if we are not human beings from the moment we exist, then that means our humanity is earned, or conditional, or granted at the whim of another.

We at Live Action have shown in the past what the abortion industry thinks of human life.  Our Inhuman investigation put a spotlight on the callous, cruel, and shocking way abortionists and their staff refer to babies in the womb.  We demonstrated the truly gut-wrenching procedures these so-called doctors employ to heartlessly destroy precious pre-born babies.  And we showed how this macabre outlook on what humanity before birth means can – and too often does – bleed over into what liberties these abortionists take with life after birth.

No decent society can operate this way.  Embryology is unequivocal about what human life in the womb is.  Not a “clump of cells.”  Not a “blob of tissue.”  Not the “products of conception.”

We at Live Action will continue to educate about this fundamental reality, reaching thousands every day online, on school campuses, and in communities across America.  We hope you will, too – and that you’ll join us in praying for the day when our government considers all human beings “worthy” of having their human rights respected.