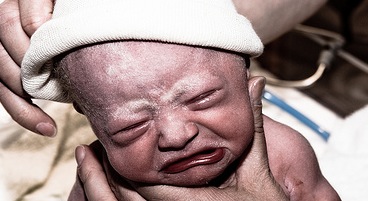 Reminding us all to do something.

On November 4 of this year, a new pro-life documentary – The Voice of John – will be released. Produced by River Song Productions, this film will discuss the reality of babies born alive after abortions as well as evidence of atrocities that occur with far too much regularity in the abortion industry. In The Voice of John, the humanity of the unborn will be made real in yet one more way for the world to see, as “one small voice will speak for millions.”

“John” is not a make-believe person or a fantasy. He is a real baby, who survived an abortion and was then left to die by medical professionals. The movie’s site details the true story behind The Voice of John:

In 1977, a young nurse was working in an obstetrics unit of a major veteran’s hospital, stumbled upon a LIVE baby, placed in a ‘dirty utility room,’ left to die! What she did not realize is that Roe vs. Wade had just been passed by the U.S. Supreme Court and this atrocity was indeed legal! The staff in the facility reprimanded her as she tried to explain that a baby was alive and placed on a cold metal table and left to die! Against their instruction, she held that baby in her arms and listened to his soft whimpering cries for survival. She held the child, baptized him, and said, ‘I name you John, and I will tell the world what I saw here today. I will be your voice!’

In production since early 2011, The Voice of John will feature former Governor Mike Huckabee, former Planned Parenthood director and current president of And Then There Were None Abby Johnson, Father Frank Pavone, scientist Ken Ham, multiple members of the U.S. Congress, medical experts, abortion survivors, women who have had abortions, and former abortion doctors like Carol Everett. The Voice of John will take a look at abortion through a prism of countless angles, opinions, and stories that will bring the real truth to light.

The documentary’s producer shares one of the main purposes behind this film: to convince the church as a whole to act on the issue of abortion:

This film is designed to be an forensic educational production that will not only expose the truth about this senseless killings but show to goodness and forgiveness that we all have through our Lord Jesus Christ. For we learn in Luke 6:37 we see: ‘Do not judge, and you will not be judged. Do not condemn, and you will not be condemned. Forgive, and you will be forgiven’. (NIV) Yet statistics show Women identifying themselves as Protestants obtain 37.4% of all abortions in the U.S.; Catholic women account for 31.3%, Jewish women account for 1.3%, and women with no religious affiliation obtain 23.7% of all abortions. 18% of all abortions are performed on women who identify themselves as ‘Born-again/Evangelical’. (says Dorothy Guyton of dirt2diamonds.blogspot.com)

A new study by The Center For Reason (www.CenterForReason.com) finds that Christians have just as many abortions as their non-Christian counterparts. The study concludes that in the year 2000, Christians were responsible for 570,000 abortions. Catholics were found to be the worst offenders, with abortion rates higher than the national average. (www.centerforreason.com) We have a lot of work to do but it’s not all done on the streets of this great nation. It needs to be done right inside our own church walls. The church can no longer be silent, and then come to ‘life’ every January and every other November, and say ‘We are Pro-Life’ Of the 70 million Christians in the US about 3.5 m or about 5% are involved in the Pro-life movement in some way. Until we realize that abortion is a bigger symptom of the real problem, we cannot see an end in sight.

Five percent of Christians is clearly not enough. More Christians must stand against abortion and stand up for the innocent. Without question, abortion must be spoken about from our pulpits and in our pews. We must speak with truth and compassion, with love and courage. We must determine that we will not stop until every life is saved and every silenced voice – like John’s – is heard. This is the call that has been put on Christians, and we must answer it.

This November, watch The Voice of John, weep with the reality of millions of innocent lives lost, and then get up out of your chair and do something to end the slaughter.