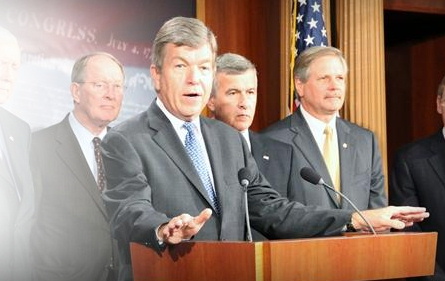 On Thursday, the U.S. Senate told the American people morals don’t matter anymore. The Senate killed a pro-life amendment, called the Blunt Amendment, by a vote of 51-48. Republican Senator Roy Blunt of Missouri offered the bill. It would have prevented the Obama Administration from forcing employers to provide their employees with health insurance that provides for drugs or procedures to which the employer is morally opposed.

According to the National Right to Life Committee, the Blunt Amendment would have altered the ObamaCare health care law to stop the “use of that law to issue regulatory mandates that violate the religious or moral convictions of those who purchase or provide health insurance.” The Blunt Amendment would not apply to any law other than ObamaCare and would not apply to state laws.

In a Thursday press release after the Senate vote, the National Right to Life Committee said it would not stop challenging the Obama Administration’s authority “to mandate virtually all employers pay for services they regard as morally objectionable, both in Congress and through political action.” The mandate in question requires almost ever employer to purchase health care plans that cover FDA-Approved methods of birth control. The National Right to Life Committee fears if the authority to issue such mandates is given to the President, it could eventually be used to force health plans to cover all abortions.

In the Thursday press release, Carol Tobias, President of National Right to Life, stated, “National Right to Life will continue to challenge the Obama Administration’s abortion-expansionist agenda on Capitol Hill, and we will encourage millions of like-minded Americans to remember the issue when they cast their ballots in November.”

In the U.S. House, the same legislation is known as H.R. 1179. Republican Congressman Jeff Fortenberry of Nebraska offered the legislation. H.R. 1179 has 220 cosponsors, which the National Right to Life Committee notes is more than half of the members of the House.