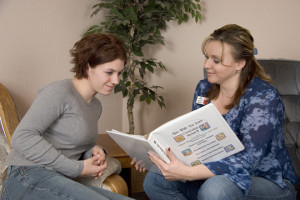 Did you hear about the #ExposeCPC Tweetfest that happened a while ago? It was interesting. A whole bunch of abortion supporters got on social media to expose the inner workings of pregnancy centers that allegedly shame women, lie to them, and don’t care about them at all. I’ve been volunteering for pregnancy centers for years, and working at them for a couple. So I got on during the Tweetfest, too, and tweeted away about all the life-affirming awesome things I’ve seen. And do you know what? There are so many lies out there. Here are some of the things floating out there during this Tweetfest that need to be addressed, and truthful things about pregnancy centers we should really be talking about.

Many people who work for and/or volunteer at pregnancy centers are religious. This is true. Many pregnancy centers are based on Christian values, but there are actually a good number of centers which take a more secular approach to serving their clients. One place I work at even has an atheist who has helped us save a baby. There is certainly some occasional over-zeal from people at pregnancy centers, and it saddens me every time I see this.

But it is not the norm for religion to be forced on women. Every time it is, it validates what these people are saying. Women surely do not need Jesus shoved in their faces when they are in a crisis situation. But these incidents are few and far between.

There’s nothing wrong with religious people or Christian values. Just because many pregnancy centers are run by Christians doesn’t mean all centers are places where they are going to hand you a Bible and ask you if you’ve accepted Jesus Christ as your Lord and Savior the second you walk in.

Here’s something that is really interesting: Many people told me how pregnancy centers are not legitimate places because they aren’t all-encompassing  health centers. It’s true that most pregnancy centers are not giving cancer screenings and annual exams. That’s why they are called pregnancy centers, not medical clinics. The pregnancy centers I’ve work for and seen don’t claim to be medical clinics, because they’re not. Those are the kinds of services they refer for. Pretty much every center gives free pregnancy tests, and many do give free ultrasounds and prenatal care. But much of the time, medical care is not the first thing a woman considering abortion needs anyway. That’s where expert counselors and the initial intake process comes in. After that, women are referred for further medical care.

Of course, if we want to get rid of Planned Parenthood, we do need an alternative to their non-abortion, life-affirming medical services such as annual exams and cancer screenings. But did you know that Planned Parenthood recently provided only about 20,000 primary care services to its over 3 million clients? The same report showed that there were over 1,000 federally qualified health centers providing this care – the vast majority of which do not provide abortions. People do have a choice other than Planned Parenthood, and pregnancy centers are part of guiding people toward centers that don’t destroy life.

For the first time, I encountered people telling me that pregnancy centers need to stop receiving government funding. Say what? Most people recognize that Planned Parenthood received over $542 million last fiscal year, but pregnancy centers? Every one I’ve encountered relies on the generosity of donors. Not a dime comes from the government. When asked to prove the existence of government funding, those who volunteered this claim had nothing to offer. This is not something I’ve been able to find a firm answer to, and perhaps some centers are given funding, but I’ve never seen that. If someone has evidence to support this claim, I’m very interested in reading it.

Many people, when faced with the thought of a pregnancy center, conjure up images of Bible proselytizers beating women into choosing life. But do any of them really have evidence? Have any of them been inside one? Have any of them actually seen every single pregnancy center to know that all of them lie? Someone shared a video of an alleged undercover investigation of a pregnancy center which featured a woman (who had had an abortion herself) sharing the pain and aftermath with the young woman who came in. She didn’t give the client a medical study to back up what she was saying. But hey, neither does Planned Parenthood when they call babies clumps of cells. Many pregnancy center volunteers have had direct contact with abortion in their lives, and speak from experience, not as a medical expert.

Women deserve to be told the truth, and as far as I’ve seen, that’s what they encounter at pregnancy centers. The truth isn’t always comfortable, and perhaps that’s why abortion supporters become upset at the information women are being given. It’s true that a baby’s heart starts to beat very soon after conception. It’s true that the Pill is a carcinogen. It’s true that many women suffer from abortions. And you know what else is true? It’s true that Planned Parenthood lies. In Live Action’s Rose Acuna project, these lies were documented.

The reality of pregnancy centers is that they are full of staff and volunteers whose hearts are fully invested in assisting women make life-affirming choices. Working hands-on in these centers is not easy. It breaks your heart when women ignore the truth or when their boyfriends storm out, pulling them along. But it’s worth it every single time a woman is empowered by her options and makes the courageous choice to give life to her child despite the circumstances. Instead of exposing pregnancy centers with lies, let’s spread the word and expose the fact that as the heart of the pro-life movement, these centers are an integral part of our mission to uphold the sanctity of all life.