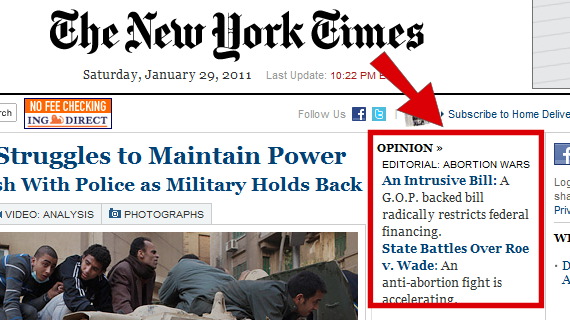 They know it, we know it, everyone knows it, the New York Times is a big supporter of human abortion. They regularly publish editorials filled with the talking points of Planned Parenthood (the nation’s largest abortion provider) and NARAL (National Abortion Rights Action League).

Oh and don’t forget the little puff piece they did on Planned Parenthood President Cecile Richards.

One of their new articles (which they gave front-page billing today as seen in the image above) is titled, “The Two Abortion Wars: A Highly Intrusive Federal Bill” and is filled with fear-mongering about the “No Taxpayer Funding for Abortion Act”. The author (whom the NY Times does not publish on their website…how is that for transparency) states that the bill “could block insurance coverage for abortions for countless American women”. In reality, it would only stop taxpayer funding of abortion. The only time a women would not be able to have her insurance plan cover abortion is if the taxpayer was paying for that plan. In that case, private insurance could be purchased to cover insurance but this reality doesn’t stop the NY Times from revving up the scary language. They call the bill “pure politics” and ignore the reality that the measure is broadly supported by the American people. A Quinnipiac University poll last year found 67 percent of Americans oppose taxpayer funding of abortion.

The second pro-abortion rah-rah piece from the NY Times is called, “The Two Abortion Wars: State Battles Over Roe v. Wade“. This piece slams states for considering new restrictions on abortion. It calls common-sense measures to ensure women are fully informed before an abortion “extreme” and “unnecessary regulation”. And the opinion piece conveniently calls the 2007 US ban on partial-birth abortion, “a federal ban on a particular method of abortion”.

The NY Times is afraid to even use the words “partial-birth abortion” because they know that the public will be repulsed by the idea no matter how good they try to frame the issue. The media knows that if they frame any issue, they can control how people will think about it. If they write in a way as to assume that the unborn is not worthy of consideration as a human life, they know the public will slowly ignore that fundamental question. Out of sight, out of mind. When the public is faced with having to answer what an abortion does to an unborn human child, the moral questions that arise are unavoidable. The reality of brutal killing cannot be denied and the public realizes that a civilized society cannot stand for such an uncivil act.