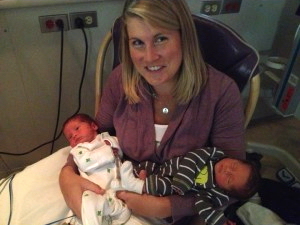 Not just one miracle, but a series of them.

As Thanksgiving approaches, we realize that we often take life for granted. It feels good to stop and think about our blessings, miracles great and small, that mean so much to us: love, family, friendship, faith, health, life. Sometimes we go through great trials, but even these things serve only to make us more appreciative of the greatness of our blessings.

Amy Wilson, the eldest of eleven children, always appreciated the blessing of family. As soon as she graduated from high school, she joined a missionary effort spending two years of her life serving the poor. The work brought her to Mexico, where she met her future husband, Chad, whom she calls “the love of her life.” They married in 2006.

Amy had always dreamed of having her own big family, but she and Chad found that they were unable to conceive. Amy began having headaches, which she called migraines. Then numbness developed, and her eye/hand coordination became affected. One night, she fell down a flight of stairs and ended up in the emergency room in Petoskey, Michigan. The doctors were stunned by what they discovered, and the diagnosis shocked Amy, Chad, and the entire family. Amy was suffering from a rare brain tumor – one known to affect males over the age of 50. The doctors had no explanation for Amy.

Amy’s family, a family of faith, began praying intensely. They began a search for the best doctors, the best medical treatment available. A friend was able to get her in to the Mayo Clinic for her biopsy. Soon she learned her prognosis: stage 4 cancer and a life expectancy of six months.

Family and friends prayed even more for Amy, and various prayer chains were called. Amy was not really aware of much of what was happening or being said. Her family kept things hidden and tried to stay upbeat for her sake. It was all happening so fast!

The doctors said they were going to “hit the cancer hard!” And they did. In three weeks’ time, an operation to remove the tumor took place, and 98% of it was removed. Amy then endured a grueling 12 weeks of daily chemotherapy with radiation simultaneously five days a week. Then there was six months of chemotherapy after that. The doctors did not even change her odds after all she went through. They just kept saying to her, “Somebody up there is watching over you, Amy!”

Amy admitted that the process was excruciating. Throughout the ordeal, Chad was at her side, supportive and positive. He always told her, “We’ll get through this!

After the chemotherapy, Amy was offered an experimental medicine that she chose to accept.

Amy was still surviving but simultaneously watching her dreams slip away. The couple abandoned their hopes to ever have a family. Her doctors told her that it was not going to happen. Such intense chemotherapy will destroy fertility and adoption would likely not be possible for a woman with a diagnosis of a terminal illness. But in their church, they learned that a baby named Ella needed a foster home. While Amy was still recovering, she and Chad applied to care for the child and eventually, became legal guardians of little Ella. Soon, Ella’s 4-year-old sister, Kisa, needed foster care and they welcomed her into their family too. The couple was now a happy family of four!

Soon afterwards, they received some miraculous news. Amy was 8 weeks pregnant! “When I first found out I was pregnant I did not believe it,” said Amy, “I did not think it was possible!” She was scared too. “The doctors explained to me there could be birth defects, or that the baby might not make it to term among other problems,” Amy said.

Now she had another decision to make. The side effects of Amy’s new drug therapy were completely unknown. Having no idea what the experimental drug could do to her developing child, Amy was given the choice of continuing the medication or halting it. Amy chose, as she says, ‘to put the baby’s life first. I made the choice that I  was going to stay positive. I knew I had a little miracle inside me!”

Not to be outdone for amazing the doctors, Maria was born to Amy and Chad, miraculously, healthy and normal in spite of having the umbilical cord wrapped around her neck and with a detached placenta. “She was perfect!” said her mother.

Seven months after the birth of Maria, the family got another surprise. Amy was expecting again…this time, identical twin boys!

The boys, Gabriel and Daniel, were born at 36 weeks’ gestational age, and they are 2 months old this Thanksgiving.

The couple who once watched their hearts’ desire slip away has now been blessed with five children in barely four years’ time. “It is hard work,” Amy says, “but extremely rewarding.”

Amy and Chad are having a quiet Thanksgiving with just the seven of them, developing their own traditions and enjoying the little ones. “I asked my six-year-old what she is thankful for, and she said, ‘Our house.’ I asked why, and she said, ‘Because we have somewhere to sleep when it rains!’”

Today, Amy says she feels good. She gets tired, and there are still side-effects of tiredness from her therapies, yet she keeps going, and she feels blessed. Even Amy wonders if she is taking enough time to say that extra prayer and thank God.