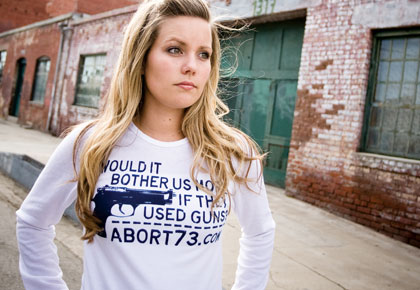 A popular publication is horrified to consider that abortion is in fact an act of violence.

Abortion-supporting Salon recently expressed horror at Rush Limbaugh’s suggestion that requiring each abortion to be committed with a gun would put a stop to the practice that has ended the lives of over 55 million Americans since Roe v. Wade.

Obviously, this would never actually happen, but it sheds light on a fact very alarming to abortion activists: that every abortion commits a terrible act of violence. The medical equipment used in abortions gruesomely dismembers the unborn. Would abortion via a gun be that different from abortion via dilation and curettage? Sure, it would likely seriously injure the mother as well as her child, but many chemical and surgical abortions do that already.

Interestingly enough, Salon is also furious about a recent Alabama Supreme Court ruling that grants the unborn legal protection and applies Alabama’s law against chemical endangerment to unborn as well as born children. This ruling upheld the convictions of mothers whose children tested positive for illegal drugs at birth. Despite the efforts of Alabama state legislators to tighten abortion restrictions, the high number of pro-life crisis pregnancy centers in Alabama, and this groundbreaking ruling toward equal protection for unborn children, abortion businesses across the state continue to thrive, and abortion advocates continue to fight protective measures for the unborn.

Salon lamented that pregnant women could potentially be prosecuted for exposing their children to illegal drugs in the womb, ignoring the fact that behaviors like smoking, drinking alcohol, and doing drugs while pregnant can do harm to a living, growing human being.

Salon went on to complain, “few in this culture find the troubled, drug-using or neglectful pregnant women sympathetic.” Sadly, they are right about this. Our culture of instant gratification, quick fixes, and euphemisms about “choice” offers little hope to pregnant women in need. We need to become a culture that offers pregnant women – including those who abuse drugs – information about their developing children that will deter them from engaging in behaviors that could end or harm life in the womb, like aborting or doing drugs. Providing pregnant women in need with resources, medical care, and life-affirming choices is just as important as providing them with information.

I absolutely agree with Salon that we must sympathize with mothers in need. But the best way to do this is not by championing abortion; it is by loving every pregnant woman, regardless of her past, her financial situation, her immigration status, or her age. Loving every pregnant woman means giving her the information and resources that make abortion unnecessary and unthinkable.

The possibility of passing a law requiring that abortions be committed with guns is unrealistic, but Mr. Limbaugh’s point that abortion is a violent killing procedure should be remembered. And pro-lifers should see Salon’s paranoid predictions about pregnant women losing freedom because of laws that punish endangering unborn children as a challenge. We must protect every pregnant woman and her unborn child from poverty, drug addiction, and the money-seeking abortion industry while promoting self-ownership for mothers and their unborn children.