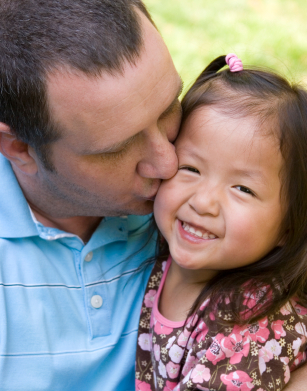 In this clip, I asked them to talk about the differences between domestic and international adoption and whether there are available grants for both.

Click the embedded video and it will start at the right place in the interview. This particular topic ends at 15:08.

If you don’t want to watch the 5-minute video, you can read the full transcript below. 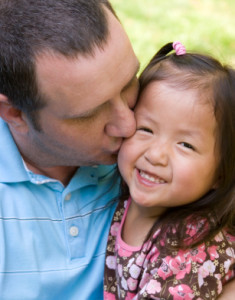 Laurel Boylan: Well, sure. The process is very different in that the family — in most countries — must actually travel to the country where the child is from to do the adoption. And every country varies in how the process works. For instance, in Ukraine, the adoption actually happens in Ukraine. The matching of a family with a child happens in Ukraine. And that’s why we’re not an agency. We just help families go through the process, navigate through the Department of Homeland Security and the immigration process and so forth and the paperwork — and then hook them up with reliable people on the other end who then, you know, take it from there.

And so when you go to court, you are going to court only a week or two after bonding and meeting with your child. And then ten days later after the appeals period, the adoption is final. So by the time that you bring your child home — into your home and meeting your family members — that adoption is final in Ukraine.

And then the family chooses — California, it is optional — whether they want to re-adopt here in California or not. We encourage most families to go ahead and do that. But that’s a very simple process compared to adopting a child from the start.

Josh Brahm: So pros and cons of international adoption, what would they be?

Laurel Boylan: We have two reasons people usually contact us for international. One, they are drawn to a particular country because of their own origin or they know of somebody who just adopted from that country and they feel moved to research that. Or they have heard somebody’s horror story locally and they just think all adoptions will fall along that path, so they decide “I don’t want to deal with, you know, that,” and they’ll want to go overseas.

And they want the adoption to be final. They don’t want to risk having somebody change their mind once the child is in their home.

The negative part of it is that it is very expensive. Depending on the country, it can be very, very time consuming. Ukraine, we typically do in less than six months, but most countries are a year or more.

Josh Brahm: You have to spend a long time in the country too, right?

Laurel Boylan: Well, every country varies. Some countries require two or three trips, but they are not necessarily very long. In Ukraine, each adoption — from the time you arrive to the time you leave with your child is approximately six weeks. But there are three different ways a family can do it. They can make one trip, two trips, or make — both of them travel and then one comes back right after court. The other one just stays and brings the child home, which is what most families do. That’s the cheapest.

Josh Brahm: And then you said that because the cost is greater, there are a lot of grants out there to help with that. Talk to us a little bit about that. I’ve heard that Steven Curtis Chapman’s foundation —

Josh Brahm: Yeah, so just talk to us a little bit about that. What is out there for people that are wanting to do [international adoption] — and then I’m going to ask you if there are also grants for domestic adoptions, obviously.

Laurel Boylan: There are foundations all over the United States that have been touched by adoption, mission work, or foreign adoption in some way. Each of them have their own criteria. Some are income-dependent, most are not. Some require you to adopt a certain-aged child, or a certain number of children, or a child with a special need. Others do not. And so that’s where one of our missionary projects is to stay on top of what’s available and to help families.

We also believe in families connecting with other families for fundraising. And the power of Facebook and the power of the internet is amazing in trying to raise money for adoption. You share a story out there and people end up raising the money. It’s just really, really fun to see it come together.

Josh Brahm: And are there also grants and things for people who want to do domestic adoption, but don’t have a lot of money for that?

Stephanie Grant: Absolutely. And Steven Curtis Chapman also provides grants for domestic adoption. Also, there is a tax credit that was just renewed. I don’t know the exact number, but it’s $13,000-something. But yeah, it’s a tax credit, which is a great support for —

Stephanie Grant: And that’s great. The other thing — with Infant of Prague, we have a sliding scale. And so we try to make it as affordable as we can for individuals and knowing that it is a financial commitment. We have found with our families too that they are really creative in different ways. They fund raise and a lot of times families and friends will help.

We also do — the way we set up our payment plan is in steps. And so we have families that — they were going to save money up to this certain step, and they take their time through the process. And we just work with them that way.