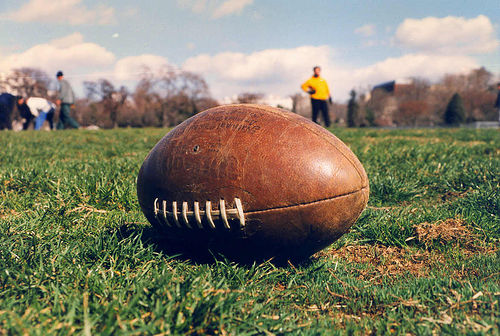 One of the biggest sporting events in the United States will be taking place on February 2nd.  With it will come all the things that make the Superbowl famous – team spirit, athleticism, commercials actually worth watching, and of course, the massive revenue that comes with such a highly-publicized event.  The sales of commercial slots and tickets alone generate millions of dollars, not to mention the sales of food and beer, or the bonuses and salaries doled out to star athletes and coaches.

There’s a dark side to this American tradition however, and the public corporations aren’t the only organizations looking to make a profit off everything that surrounds America’s sports obsession.  Human trafficking reaches epic proportions in the days preceding the game too, as an influx of pleasure-craving football fans creates a massive spike in the demand for, and thus the supply of, sex slaves.  The Superbowl isn’t just the biggest day for football, it’s also the biggest day for sexual slavery.

While beer companies pay between $3.7 million and $3.8 million per 30-second commercial demonstrating their product’s appeal, other Superbowl advertisements have promised “young,” “curvy” girls available for “un-rushed” body rubs and “total” satisfaction.  Comfort if your team doesn’t win the big game.

Superbowl tickets sell at a premium price, but so do little girls on that same weekend.  Double and triple price, according to former prostitute Anna Gristina.  It’s an industry with even more profit potential than beer, food, or drugs.  After all, points out Peter DiMarzio, a special assistant to the Department of Homeland Security, working to combat trafficking, those commodities can only be sold once, and then they are gone.  But a person?  “A human being can be sold over and over again, multiple times a day,”

Clemmie Greenlee knows.  Abducted and raped by her captors at age 12, and forced into sexual slavery thereafter, she has vivid memories of being transported to large cities to be sold for sex during major sporting events.  Often, she would be expected to sleep with 25-50 men per day during high-traffic games.  And while police and task forces are becoming more aware and vigilant, rescuing these girls isn’t so easy.  Many women who are placed into protective care will return to their captor out of fear and mental duress.  Greenlee explains, “”There’s no such thing as we want to go back to these guys, we do not feel that no one — not even the law — can protect us, and we do not want to die. . .You can say you’re going to save us, you can say we don’t have to worry about the pimps no more. We already know what power they have shown us. So either you come back to them, or you find out two days later they either got your grandmother or they just broke your little baby’s arm.”

Still, efforts are not futile, and much greater work is needed, both to draw attention to the prevalence of sexual slavery in the United States, and to reach the women stuck in it.  New Jersey law enforcement officials are holding special training camps to prepare law enforcement officers, as well as help others who may come into contact with victims, such as airport employees or hospitality workers, to recognize the signs of human trafficking.  Many local churches are educating their congregations as well, and even truckers are learning what to watch for as they traverse the highways and rest stops around the city.

Private organizations dedicated to fighting human slavery are also making preparations.  The Polaris Project, a nonprofit organization focused on combating human trafficking, will be adding more staffers to its hotline in the days preceding the games, and previous measures have included giving hotels bars of soap with hotline numbers etched into them, in hopes that young women will find a way to reach out.  It’s not enough, not yet, but it’s a start.  A similar effort was what finally reached Greenlee when, at the age of 42 she took the chance of calling a number she’d been given dozens of times.  “The one thing I had in my head was, ‘If I learn how to live and heal, I can get back and get those girls.”

For those who suspect trafficking, contact your local police or the Department of Homeland Security at 1.866.347.2423. The National Human Trafficking Resource Center also staffs a toll-free 24-hour hotline at 888-373-7888.