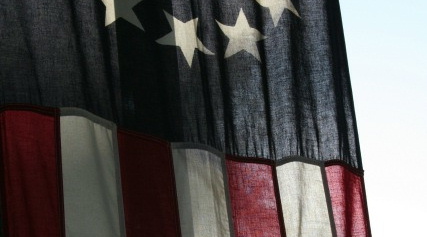 We will never stop fighting. 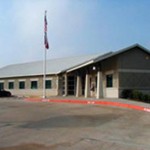 It always irks me to see an American flag flying above an abortion clinic. There has never been a day on the sidewalk when I haven’t gritted my teeth at the blasphemy the abortion industry advertises by raising the red, white, and blue full-staff over a building that is completely antithetical to what the stars and stripes have stood for throughout our nation’s history.

I begin to think about all of the brave men and women who have selflessly sacrificed their time, their families, and, for some, the ultimate cost – their very own lives – to protect and defend our freedoms from tyranny and oppression. And yet there it stands in all of its glory, the symbol of our nation, above one of the most heinous and oppressive places in our country, which promotes no life, nor liberty, and the people leaving the clinic are anything but happy.

Regardless of your position on the necessity of war, I think we can all agree that the cost of freedom is not free. The rights and liberties we hold so dear to our hearts have been bought with blood. Precious blood that should have never had to be shed, sacrificed so that you and I may live in freedom. Yet some people believe that true “freedom” lies in a woman’s ability to choose to abort her baby or keep it. They have convinced themselves that their freedom to live as they wish trumps the right to life of the unborn because of a perceived inconvenience it may or may not place on a woman’s lifestyle. There are more than just the people in our armed forces fighting a war in our country. The unborn are also soldiers – silent soldiers – whose lives are being sacrificed by the millions for a so-called freedom of “choice.” The blood of the unborn has been senselessly spilled, with almost 3,500 innocent human beings aborted each and every day in a country that prides itself on protecting life first and foremost. 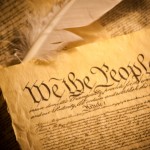 Even the Constitution provides for our posterity

The Preamble to our Constitution states:

We the People of the United States, in Order to form a more perfect Union, establish Justice, insure domestic Tranquility, provide for the common defense, promote the general Welfare, and secure the Blessings of Liberty to ourselves and our Posterity, do ordain and establish this Constitution for the United States of America.

That’s funny. When I look through my handy pocket-sized booklet of the Constitution, I don’t see anything that comes close to mentioning a “right to privacy” (created by the Supreme Court in Griswold v. Connecticut) that inherently gives a woman the freedom of choice to abort her unborn child. Maybe that’s because this mysterious “right” emanates from a penumbra, or as I like to call it, the “legal twilight zone” of the law, which essentially takes components of the First, Third, Fourth, Fifth, and Ninth Amendments, cranks them into the Willy Wonka Everlasting Gobstopper Machine, and out pops the “right to privacy,” thus paving the way for legalized abortion.

What I do see, however, is a covenant among the People of the United States, promising to protect and defend the life  and liberty of her citizens, ensuring them for “ourselves and our posterity,” which is the complete opposite of what abortion advocates. 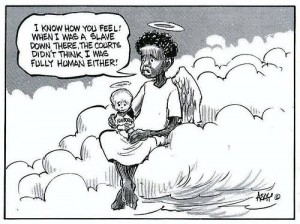 We will overcome the injustice of abortion and protect the life of ALL people. It is only a matter of time.
(Reprinted with permission)

Unfortunately, this is not the first time since America’s birth that she has witnessed inequalities in the rights of her people. The one thing that gives me hope for our country is that our flag has stood strong despite times of injustice, particularly that of slavery. While we as a country have come a long way since those days, we are still struggling to give the same respect to the most defenseless among us – the unborn. The Dred Scott decision disallowing citizenship to people based purely on race proves that we are not infallible nor always equal and just in our application of the law, but thankfully we have been able to overcome the atrocities of our past.Despite all of the evils and corruption our country has faced and will continue to face, our flag remains a beacon of the ideals our nation was founded upon, as a constant reminder of the burden and blessings that freedom entails.

As I snap out of my disdain for the desecration of our flag, I think about how helpless Francis Scott Key must have felt as he watched the bombardment of Fort McHenry during the Battle of Baltimore from afar on a boat, thus spurring his writing of our National Anthem. Although there is a war waging in America for the rights of the unborn, that they may be ensured of the same life, liberty, and pursuit of happiness that all human beings are entitled to, the star-spangled banner still waves on above the abortion clinic, even amidst the injustice freedom seeks to destroy.

Our flag will continue to gallantly soar above the “land of the free and home of the brave,” despite the attacks that attempt to take away our most intrinsic rights- attacks in which an abortion clinic profits from. As is evident in the lyrics of our nation’s song, freedom never quits, and freedom always triumphs. Polls show that a majority of Americans now consider themselves pro-life, and these numbers will continue to rise as we strive to educate people on the humanity of the unborn, provide care and support for the women and families in crisis pregnancy situations, and seek to change the hearts and minds through pure love in order to make the killing of pre-born Americans unthinkable. Our Constitution is pro-life. Our Declaration of Independence is pro-life. Americans are pro-life.

It is only a matter of time until we look back on the evils of abortion as an unfortunate chapter of America’s history like that of slavery. The time is now. We must fight for life.