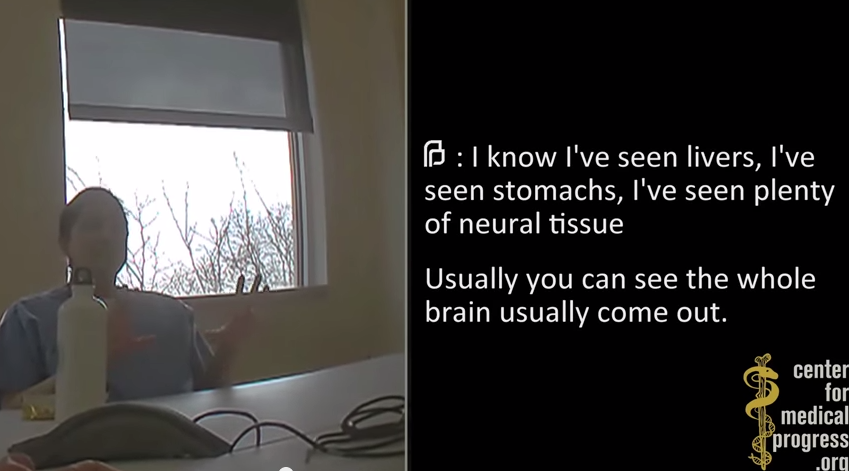 The full, unedited footage of the fourth video from the Center for Medical Progress gives us an insight into the behind-the-scenes operations at Planned Parenthood of the Rocky Mountains in Colorado. Dr. Savita Ginde and her staff seem more than willing to be a part of what fetal tissue procurement agencies are doing.

The nonchalance – and even enthusiasm – expressed by Dr. Ginde, and medical assistant Jess, regarding the harvesting of fetal tissue, become more and more disturbing as the video goes on. The environment at PPRM seems very much like any medical establishment, and every couple minutes or so, you have to remind yourself as you watch: “They are killing children here.”

At 1:35:45, Dr. Ginde begins speaking about the typical operations of the lab where aborted children must be examined to make sure all of their body parts are present. From the transcript:

Ginde: But sometimes with the residents, I tell them to poke around, and sometimes embryology will come full circle. Find all the parts you know, see what you can see. Especially with the thirteen, fourteen, fifteen weekers, I think it’s pretty amazing. We find heart, we’ve see kidneys and adrenals, sometimes there’s thing I don’t know what that is but it’s a part… I don’t’ know if it’s lungs, if it’s brains, if it’s heart-

It’s pretty amazing to see all the body parts of a child that’s just been killed, says the abortionist, with no apparent concern for the fact that this child was alive moments prior and now is just a specimen – an embryology lesson. Sadly, we know the women having abortions aren’t given any sort of embryology lesson before having the procedure. Ginde is also very concerned about making sure nothing gets crushed after the abortion procedure. Wouldn’t want to damage those valuable organs (starting around 1:58:45 on the video):

Ginde: … We need to get some instruments, designated specifically for you, and make sure they’re the right ones, that we wouldn’t crush anything, that we, because we have some stuff we could use, but I don’t want to crush it. Till we get something that will grab but not grasp.

It seems that Dr. Ginde is saying the instruments they currently have in the clinic are designed to “grasp” and “crush” body parts and not let go. Fear of damage is not a factor – until the child is dead, of course, and the harvesting of organs must begin. Clearly the organs are seen as more valuable than the living human fetus.

Throughout the video, Dr. Ginde uses the word “fascinating” and “fascination” multiple times to describe the harvesting of fetal organs for use in scientific research.  She finds it so interesting that she thinks she could have done fetal tissue research in another life. Around 2:38:00, she discusses that “alternative path,” and one has to wonder – do others in the abortion industry wish they’d chosen differently?

In a conversation in the hallway, one of Dr. Ginde’s nurses gets a quick introduction to why the actors, posing as Biomax Procurement Services representatives, are there. The nurse, expressing great interest, says some patients have asked about donating fetal tissue and she’s had to turn them down (about 1:42:48):

Nurse: That is more incentive not that I think [to donate] – I think a lot of our patients would be open to it. I’ve had patients ask me before, can I donate this? I wish! Nobody would take it or want it. It would be an easy thing to incorporate into our flow too, just happen during consent, most of it.

We’d just need somebody to “take it or want it,” says the nurse. We can now count on fetal tissue procurement agencies and researchers to want the remains of what no one else did.  This certainly turns Planned Parenthood’s old “every child a wanted child” slogan on its head. Wanted – but preferably dead, not alive. While Dr. Ginde and her nurse seem oddly casual about their line of work, the new medical assistant, Jess (who reveals she has only been working at PPRM for five days; pictured right) expresses more of a genuine excitement about her work. The only problem is, that work happens to involve aborting children and then putting their body parts back together in a glass pie dish.

Jess: So fast, it’s the twelve weeks and everyone wants to know, is it twins?

Buyer: You’ve been looking for twins all day.

A bit later, around 2:31:23, Jess and Dr. Ginde are picking apart a “specimen,” trying to identify body parts. At this point, the viewer may begin to feel that this has become more of a macabre game they’re playing. A game of “Find the Organs”:

Ginde: Here’s some stomach, a heart, kidney, and adrenal. I don’t know what else is in there.

Jess: Head, arms, I don’t see any legs. Did you see the legs?

Ginde: I didn’t’ really look but-

Buyer: Yea, there it goes. yup, you got all of them right there.

Jess: Another boy. Should I just put it-

Ginde: Yea, just put it over here, I’ll wash it out. yea, so you guys staying the night or are you leaving?

Jess’s attitude and enthusiasm can’t fully be realized without viewing the video. She finds great satisfaction upon the discovery of specific tissues, and after a bit, you forget that what you’re watching is the dissection of a human being who has just been killed by the people in the room.  But Jess’s tone of voice as she says “Another boy!” seems to stun even abortionist Ginde and the prospective buyer into silence.

These are human beings they’ve just killed, and while they are very much aware of this, everyone is busily chatting about cars, travel, and weather. It is entirely too casual.

Maybe, if we look closely enough, we might even start to see that the casual chit-chat and jokes are coping mechanisms that abortion workers employ to forget about or excuse the horrific acts that are done to children by their own hands.