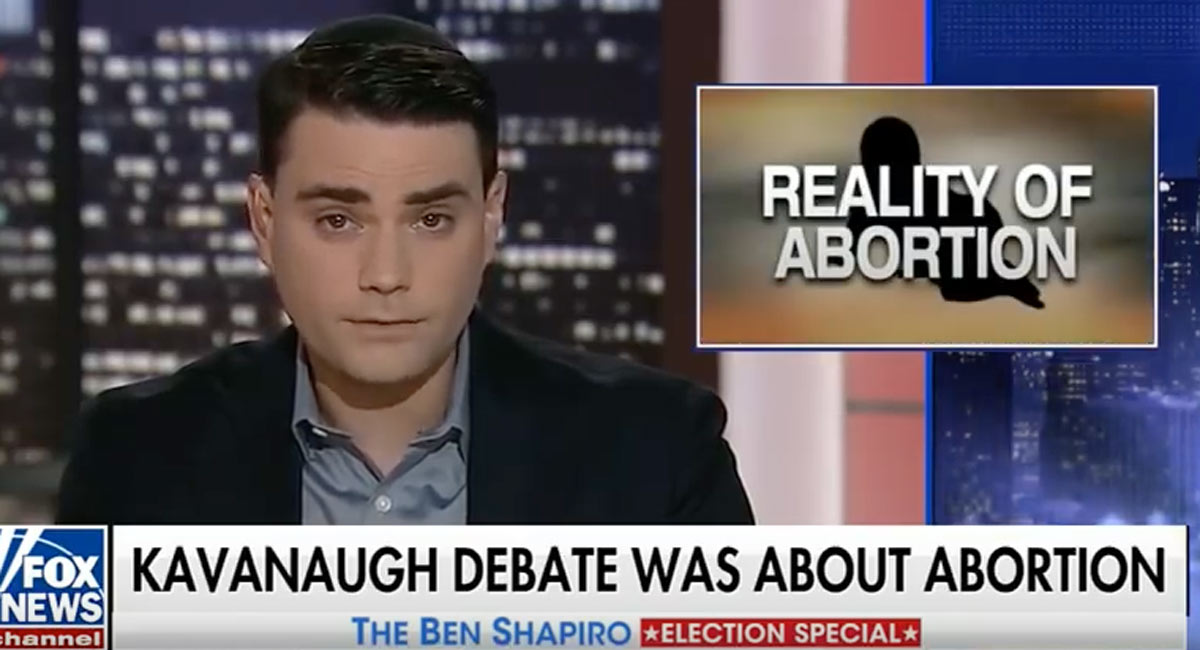 On FOX News’ Election Special segment featuring conservative commentator and lawyer Ben Shapiro, the confirmation of newly-confirmed Supreme Court Justice Brett Kavanaugh was the topic of conversation. But instead of merely discussing the controversy surrounding accusations made against Kavanaugh during the Senate confirmation process, Shapiro zeroed in on the use of “euphemistic language” used by abortion advocates — almost all of whom opposed Kavanaugh’s nomination.

Abortion supporters like to speak of “choice” and “women’s rights,” but the reality of abortion is that a human being is deliberately killed during this process.

“… The word ‘abortion’ is itself is a euphemism,” Shapiro says. “The procedure of abortion isn’t an anodyne polyp removal. It involves doing terminal violence to an unborn child. Ignoring that fact allows abortion advocates to avoid looking reality directly in the face….” Shapiro then proceeds to offer a dose of reality.

“This is a picture of a 19-week-old baby. This is a human child,” he says. “This is not a ball of goo. This is not a cluster of cells….” Yet, Shapiro says, “That is a human being with zero rights, according to the mainstream of the Democratic Party.”

Shapiro points out that 44 Democrats in the U.S. Senate voted against protecting children at 20 weeks from abortion in January 2018. “Only three Democrats,” he said, voted to protect babies at that gestational age. Two Republicans, he notes, voted against protecting these babies — Lisa Murkowski of Alaska and Susan Collins of Maine. (Interestingly, Collins gave an impassioned speech on the Senate floor in favor of Kavanaugh’s Supreme Court confirmation on Friday.)

Shapiro also shows a representation of a baby at 12 weeks. “This is not a cluster of cells,” he notes. “His genitalia have already been formed, his liver and spleen produce red blood cells….” He adds that no matter how early you go in the process of human development, it is clearly a human being, because life “begins at fertilization.”

“This human being is not its mother; it is not its father. It is not a polyp,” Shapiro states. “Human life is continuous process of growth from the moment of fertilization onward. Abortion is the killing of this human life. The later the abortion takes place, the more brutal the procedure. But, no matter the brutality of the procedure, it is obvious that abortion is not some mere optional surgery to be performed for convenience.” Here’s a video showing that brutality during a second trimester D&E, typically committed from 13 to 25 weeks:

“And it’s even more obvious that those who want to protect the lives of the unborn aren’t trying to control women’s bodies,” Shapiro says in the video. “Those who cherish abortion are trying to control and dismember the bodies of the unborn. Think about that the next time you see a radical feminist in a Handmaid’s Tale outfit suggesting that you’d better respect her right to carve apart an unborn baby in the womb, or you’re some sort of fascist. No more euphemisms.”