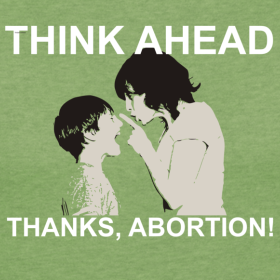 A weird website that makes abortion sound like the most empowering and exciting procedure on the planet.

In trying to remember and search for a quote on women regretting abortion, I found myself guided by Google to a website called Thanks, Abortion! There are pretty blue background colors and a nice font, with a headline reading: “Read and share positive stories from real women in the real world.” Never mind the stories from real women; the statements and messages from this website alone are enough to make abortion sound like the most empowering and exciting procedure on the planet. And, in light of some of the stories and Facebook comments, it seems that actual supporters do think that.

The About section of the site starts off by stating the following:

Are you thinking about getting an abortion, but all you’ve found were horror stories online? Stories like these often involve a lifetime of guilt, religious overtones, and above all, shame.

We really can’t speak for these individuals, but we can tell you that there’s a huge population of women who have thankfully been able to terminate their pregnancy[.]

Maybe the organization doesn’t speak for those individuals mentioned who regret abortions, but it does portray them in a negative light. It does so by over-generalizing as well. There are of course individuals and organizations that recognize the guilt associated with abortion, and many are religious, but their intent is certainly not to shame women. Also, Thanks, Abortion! does not list any sources that I could find, besides stories on its own site. Also, if such an organization wishes to truly help women, it should provide them with honest information about the true nature of abortion.

The site also has a t-shirts section, which mentions that the site would like those with their own pictures to submit them to the forums. Now, it’s always kind of fun to read what clever phrases the abortion side can cook up. There’s the typical one about choice, reading: “EMPOWERED BY CHOICE” and “CHOICE, Not Your Body, Not Your Business.” But some others are really messed up. There’s one with a sign through a fetus that reads “NO THANKS.” There’s one which honestly makes no sense to me, reading UTERUS but with the US crossed out to read “UTERME.” I don’t really get that, but okay, then. Perhaps the strangest one of all, though, reads, “THINK AHEAD, THANKS ABORTION.” The icon between those two phrases features a woman scolding a boy who may presumably be her son.

I decided to check out the Facebook page and take a look at what some of these people were posting. I can say that what I found were some of the most ridiculous and far-fetched claims that I have read. There were postings thanking and affirming the group’s stance on abortion, but also postings about how men should have no say in abortion; statements lamenting that if  only GOP men could get pregnant, abortion would be widely supported; statements thanking abortion for not bringing unwanted children into the world; etc. I invite you to check it out for yourself, because otherwise some of these statements seem too ridiculous to be true. It’s one thing to have your opinion; it’s another to hate the other side for it. Also, it saddens me that such people really do not understand what abortion is; otherwise, they wouldn’t be quick to call it so empowering. I have a friend who is extremely pro-choice, and yet she herself recognizes that abortion is not exactly empowering.

I recognize and can handle that there are those who could not disagree with me more on abortion. Many of those people happen to post on the Facebook group for this organization which claims to support and empower women. What is more difficult to handle, though, is that this organization says nothing about abortion, actually. It doesn’t even seem to recognize that such a procedure involves terminating the life of another person. I know that it’s not the organization’s scope necessarily to educate about abortion, but I can’t help feeling the sense that such an organization is denying women the truth about such a procedure when claiming that abortion is empowering and offering stories from real women who are happy with such a decision. I don’t judge these women who have shared these stories; rather, I pray for them. They may not regret their abortion now, but in time they will, and I’m sure they will be looking for an organization to help them for their regret, which I pray that they may find.

If such an organization wanted to truly empower women, it would make sense to at least have pages about encouraging women to have higher self-respect and self-esteem, so that they wouldn’t need to turn to premarital sex and the resulting unplanned pregnancies which end with these abortions. And while such a site may have the intent to help women, the people running it are ultimately hurting women by portraying abortion as such a wonderful thing. When women think about abortion in such a manner, they are misled, even lied to. Women don’t need abortion to feel better about themselves; they need love, support, and encouragement.