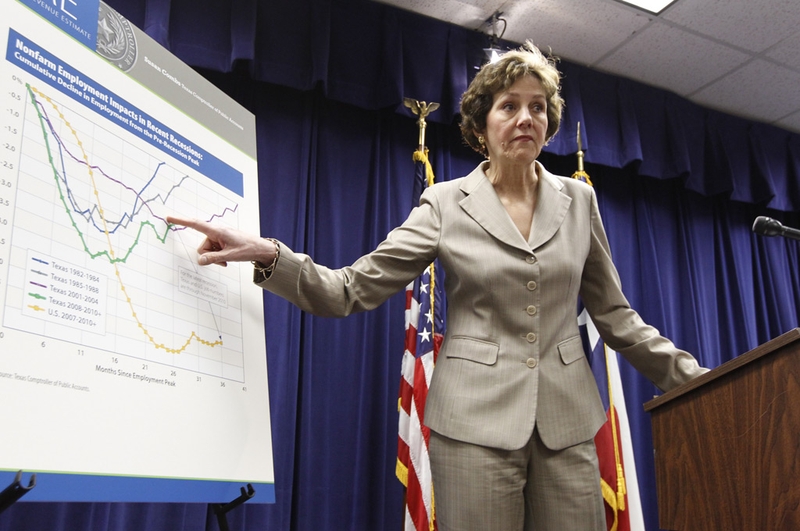 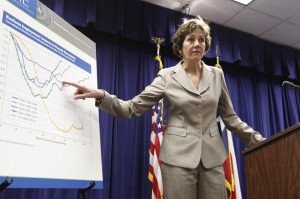 There are Republicans who courageously fight for the right to life, Republicans who gallantly chicken out at the first sign of pushback, and Republicans who just want the rest of us to shut up about abortion. Today’s representative of the third group is Texas Comptroller Susan Combs, who on Wednesday suggested to the Washington Times that GOP candidates like Ken Cuccinelli lose because their social conservatism alienates female voters:

Combs was a pro-choice politician who purported to flip to pro-life in 2011 based on the rationale that she “really thought [abortion] was rare” before, but realized that it was “being used as a contraceptive.” But that sounds like pretty weak tea, considering that annual abortions haven’t been below a million since 1975. Add that her newfound pro-life stance consisted of little more than sonogram laws and ending taxpayer funding, and it seems she moved only as far rightward as necessary, and is now shifting back because she thinks the political winds will allow it.

So it’s no wonder that Combs’s framing of the issue is tinged with the selfishness that defines modern left-wing “feminism.” We say, “Don’t kill babies,” and all she hears is talk about her.

Pro-lifers are constantly inundated with insipid claims that demanding protection for the unborn is somehow treating women like they don’t exist, but Combs’s whining demonstrates that the opposite is true: they want to treat their unborn sons and daughters like utter non-entities, and anyone who refuses to indulge that fantasy not only is intruding on their “biology,” but also cannot possibly care about any of women’s other interests (which is doubly ironic in this case, as Combs lists “their children” among those interests that protecting women’s children from abortion somehow neglects).

Nor do recent events bear out her political analysis. In Virginia, pro-abortion weasel Terry McAuliffe won by only under three points despite dramatically outspending Cuccinelli, who utterly failed to match the ex-Clinton pal’s advertising barrage. And as the American Principles Project’s Maggie Gallagher has explained, the “War on Women” narrative did as much damage as it did only because Team Ken tried ignoring it instead of confronting it head-on and painting McAuliffe as the true extremist:

On an issue such as abortion, about which Americans are fundamentally ambivalent, victory depends on how “pro-life” and “pro-choice” are defined. Republicans’ self-imposed silence allows Democrats to define pro-life in ways that help them politically. Thus, Democrats do not have to justify their positions on infanticide, late-term abortions or permitting unborn baby girls to be killed just because of their gender.

What will it take for Republicans to realize that this “truce” is one-sided? Rather than running ads attacking McAuliffe’s positions, the Cuccinelli campaign’s pathetically ineffective response has been to run ads featuring career women who look into the camera and say things like, “Ken’s a nice guy. Really.”

Even Amanda Marcotte stepped out of her feminazi fantasy-world long enough to admit:

The real story here is not men vs. women. It’s white voters vs. black voters and working class vs. middle class voters. The most startling fact of all: The majority of white women, 54 percent, in the state of Virginia voted in favor of Cuccinelli.

The much-ballyhooed gender gap basically boils down to this: A small percentage more of white women than white men consistently vote for Democrats. Put a bunch of white people in a room together, and a handful more of the women than men will vote for the Democrat, even if most of the women, like most of the men, vote Republican. These white women help push the Democrats over in races like Virginia’s last night, but they don’t overwhelmingly go Democrat. This is true in Virginia, and also on a national level. Romney got most of the white people, but he got 6 percentage points fewer of the white women, and that helped secure his loss.

Given that polls repeatedly affirm that women are at least as likely to be pro-life as they are pro-abortion, we can safely say Susan Combs’s musings are – as these periodic lectures always are – not dire warnings to avert political suicide, but wishful thinking about how much simpler things would be if not for those distracting principles.