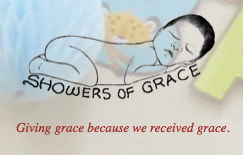 Judah and Annika, two teenage sisters from New Mexico, have – to this day – thrown fifty baby showers through their own pro-life ministry called Showers of Grace.

It all started in April 2012 when Judah read Start Here by Alex and Brett Harris. “There was a list of 100 ideas to serve God in the back and one was to throw a baby shower for a single mother,” said Annika, the younger of the two. “When my sister mentioned this to me, we decided that we wouldn’t have to stop at one shower.”

“Showers of Grace is a pro-life ministry hoping to show God’s grace to families in need through baby showers,” Annika explained. “We throw baby showers to celebrate with these mothers the brilliant gift that God has given them. We believe every child is a gift from God, and we want to recognize that no matter the circumstances of their birth.”

She continued, “Our baby showers provide an opportunity to show unconditional love to women who are struggling financially, emotionally, and spiritually. We hope to reach them financially by giving diapers, baby clothes, and other necessary baby items. By coming around them and showing them that we care, we hope to reach them emotionally. Once, a lady told us that she didn’t have any friends and a staff member pointed to a card signed by all of Showers of Grace and said, ‘Look, the people who signed that card. They are your friends.’ Ultimately, though, we recognize that our gifts and love won’t be enough. We will never be able to fix all the problems, so we point them to the one who can: Jesus Christ. At each shower we read the story of the Prodigal Son (Luke 15) and explain to these ladies that no matter what they’ve done they can return to their Lord.”

While Judah and Annika are the founders of this ministry, they have also received much support from the community around them. “Our entire family has been involved since the beginning,” Judah said. “We presented the idea to our church, which provided us with building space, funds, and volunteers (who attended showers, made homemade baby items such as blankets, edited our brochures, told others about us, etc.). Now our church still helps out, but other individuals from the community also volunteer with us. We have several groups and organizations donate to us, though we are still funded primarily off of individuals’ donations.”

Through their work with Showers of Grace, the sisters have gone through a great number of challenges, but they’ve also experienced encouraging situations firsthand. “We interviewed several past clients in honor of our 50th baby shower recently,” said Annika. “One lady told us part of her story we weren’t aware of. Apparently she found out she was pregnant at a very difficult time in her life. She told us she wasn’t prepared mentally, physically, or financially. She looked around for help, but couldn’t find any local program to help her. So she scheduled an abortion. Two hours later she called Showers of Grace, and, after talking with Judah, cancelled her abortion and scheduled a baby shower. Praise God!”

Judah hopes that others will take action, too. “I do hope others in our community will follow our example and take these mothers under their wings. I want our community to be one where girls can choose to keep their babies because they know they can find support and people who will love them and their babies in spite of their mistakes. Whatever happens with Showers of Grace, if even just a few start living like that, I will be satisfied with our work.”

Judah continued, “I have two things I’d say to youth. One, get a good team. We could never have done this without all the help we received, especially from adults who allowed us to be in charge but gave us lots of advice. Adults have a lot of wisdom. Use it. And two… Don’t get discouraged. Everything from finding funds to working with these women has been such a big challenge. It’s worth it, most definitely. But it’s not easy. Don’t let the setbacks discourage you.”