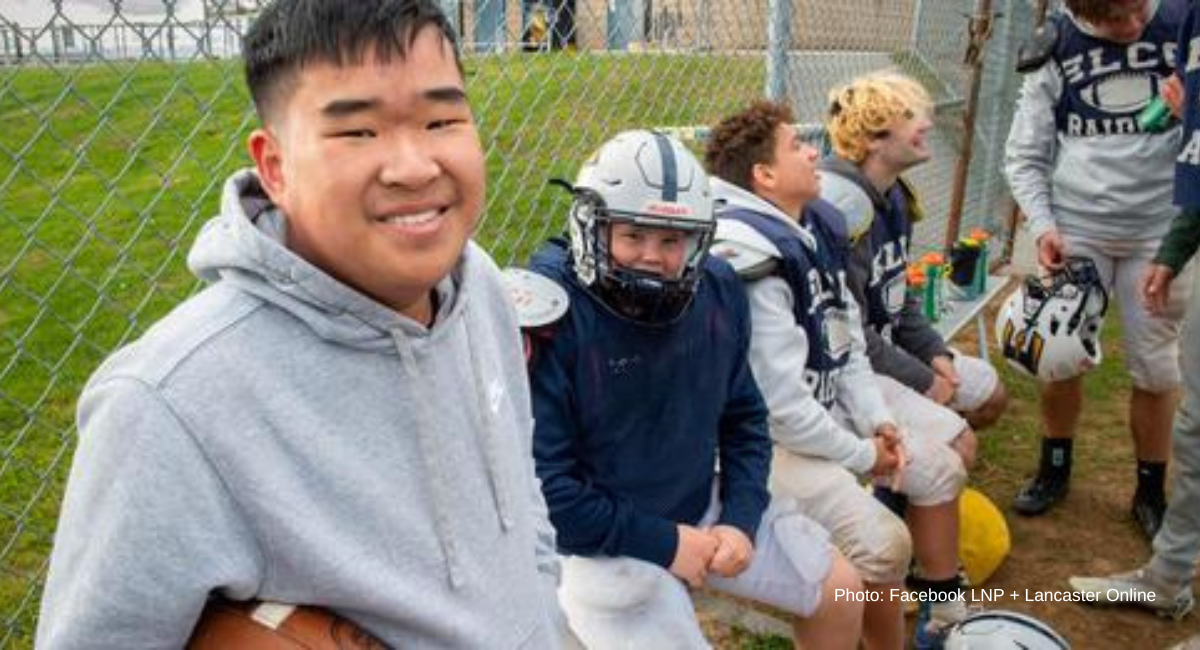 A teenager with spina bifida who was adopted as a child from China is thriving as he forges a new path in sports, showing the world he is not limited by his disability.

Ryan Wolfe grew up playing soccer and basketball, but always had a passion for football. And now, as the team manager for Eastern Lebanon County (ELCO) High School in Pennsylvania, he’s able to fulfill that passion. But it hasn’t been an easy journey. In an interview with Lancaster Online, Wolfe and his family shared his remarkable story, which started with Ryan’s adoption from China in 2012.

Justin and Kelly Wolfe had three biological daughters before they sought out international adoption, adopting five boys from China. One of their children, Brian, was adopted domestically, but his mother was from China as well. “She is terminal with cancer,” Justin Wolfe explained. “She wanted to find him a good home.”

During their adoption journey, they kept encountering Ryan. “We wondered why he wasn’t adopted,” Justin said. “Why hasn’t anyone given him a family? Well, because he was waiting for us. Once we realized what his special needs were, that’s all stuff we’d be more than capable of handling.”

At seven, Ryan was adopted, and the Wolfes worked closely with Children’s Hospital of Philadelphia to treat his spina bifida. He also had scoliosis and spoke no English. “We made up a lot of sign language,” Justin explained. “We tried to learn some phrases. Most of it was symbols for eating or going to the bathroom. But within a couple months he picked up English so fast it was crazy.”

Ryan has undergone over 20 surgeries, including placing rods into his spine to help straighten it and separate his ribs, so his lungs could grow as he grew. And though he’s also paralyzed in his right leg below the knee, he kept playing sports, as much as he could.

“Playing basketball I would break the rods in my back and I’d have to get surgery again. I’ve broken my rods so many times,” Ryan said. “There’s not anything I can’t do because I will adapt to do it.”

Football, however, was not something he could play, because of the physical contact. So he found a different way to be part of the team. “Football is the one sport I’ve always wanted to play,” he said, adding that he’s still grateful even though he can’t. “With my disability, a lot of kids are in wheelchairs and not able to do anything. I’m lucky.”

Now, he helps motivate the team, in addition to his duties as the team manager. “When you feel like you can’t do much and your body is wearing down, you look at Ryan,” ELCO football player Carter Kemper said. “You know the pain he goes through. It just pushes you further.”

Ryan has also helped to support his dad as he underwent chemotherapy for non-Hodgkin’s lymphoma. “Ryan’s resiliency is a testimony to all of us,” Justin said. “We’ve all encountered different trials in life. … Seeing all the stuff he has gone through with the adoption process, he’s an orphan child. He always has a smile on his face. When they’re having a bad day, Ryan will say, ‘Yeah, at least you didn’t have 21 surgeries.'”

And as the oldest of the five adopted boys, Ryan has served as a role model for them. “His brothers look up to him,” Justin said. “He is one of those guys who would give his shirt off his back for a friend or a stranger. … He won’t ever admit it, but he’ll do that with his siblings. Ryan has added so much to our lives. He has done more for us than we could ever do for him.”