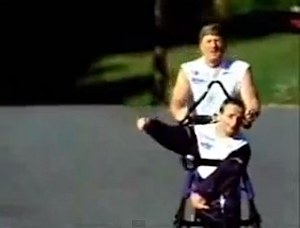 For those of us who are runners or who follow running, this Monday is not your average Monday: it’s Boston Marathon Monday. And while thousands of runners gather to tackle the epic 26.2 miles, I’d like to draw your attention two runners who will be marking their last Boston together.

I remember the first time I heard about Team Hoyt. It was several years ago, and I was watching coverage of the Hawaii Ironman – some people watch football; some watch baseball; we runners watch races. The coverage was interspersed with profiles of the runners, and that’s where I first saw the story of father-and-son team Dick and Rick Hoyt.

Rick was born in 1962 to Dick and his wife, Judy. As a result of oxygen deprivation, Rick was diagnosed as a spastic quadriplegic with cerebral palsy. Told that Rick had no chance of recovery, his parents were advised to institutionalize him, as he would be a “vegetable.” But they refused. Instead, they brought him home and determined to give him normal childhood experiences.

At age 12, Rick was able to begin communicating with the help of a speech device. One day, he told his father that he wanted to participate in a 5-mile race to help a teenager who had been paralyzed in an accident. There was one big obstacle, though – Dick was not a runner. Nevertheless, he agreed to push his son’s wheelchair for the entire race. After the race, Rick told his dad, “Dad, when I’m running, it feels like I’m not handicapped.” With that race and that statement, Team Hoyt was born.

For the past 37 years, Dick has pushed, pulled, and carried his son through thousands of races, including marathons, duathlons, and triathlons – including the grueling Ironman, made up of a 2.4-mile swim, 112-mile bike-ride, and 26.2-mile run.

Along the way, Rick graduated from Boston University and moved into his own apartment. His wish? “Hopefully people will look at me as an intelligent person and look past my disabilities,” he says. “I may be disabled but I live a very fulfilling life. I have showed to disabled people that they don’t have to sit back and watch the world go by. They, too, can go to school, get a job, and be included in everyday life.”

When called an inspiration, Dick’s response is simply, “I just love my family and I just want to be the very best father I can be.”

The child who people said should be institutionalized will on Monday race with his father in Team Hoyt’s 32nd and final Boston Marathon. At 73 and 51, respectively, Dick and Rick will continue to compete in smaller races.

Team Hoyt has shown the world the depth of a father’s love and the absolute exquisite beauty of every life. Dick and Rick, we’ll be cheering for you on Monday.