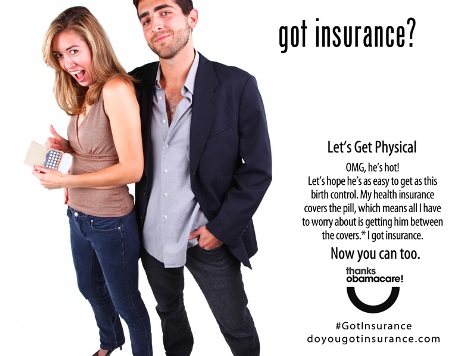 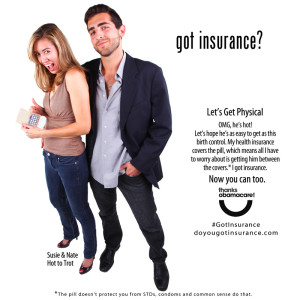 The ad, released by the Thanks ObamaCare campaign (who is partnered with ProgressNow Colorado Education and the Colorado Consumer Health Initiative), has been railed at by multiple news outlets. As Patrick Coffee of PRNewser writes:

If we’d been tasked with creating a visual ad to mock the Affordable Care Act, it would have looked something like this one: stereotypical party girl empowered to have a one-night stand with a total bro. Based on the social media response, many others felt the same way.

And the New York Post writes how “easy sex and booze” are being “used to sell ObamaCare:

Sign up for ObamaCare and get a sleazy hookup.

Colorado has launched a new ad campaign that attempts to entice young women to sign up for the new national health-care program with the promise of free contraceptives and carefree sex.

This ad is a bad idea for many reasons. Among them – a rejection of a responsible lifestyle, a promotion of sex with anyone who qualifies as “hot,” a bare-minimum attempt at actually making the sex “safe,” and an objectification of women.

While the ad (in a small note at the bottom) qualifies that birth control pills don’t protect against STDs and states that “condoms and common sense do that,” it still celebrates – and encourages – reckless behavior. If the creators of this ad truly wanted young women and men to be healthy, one would assume they would wage a campaign on preventing STDs. Instead, they create an ad that could instead encourage behavior that will promote STDs – not exactly a healthy result.

Unfortunately, those who claim to support “safe sex” often use it as an excuse to promote irresponsible sex in general. All too often, the guise of “safe sex” is used to push young adults toward a promiscuous and dangerous lifestyle. Little wonder the rate of young people with STDs has skyrocketed above that of the general population.

Colorado-based blogger, Kelly Maher, says it well: “Liberal ladies you have lost the right to call anyone a misogynist again.”

What’s most outrageous of all, however, is that these ads are supporting a program – ObamaCare – that many Americans are being forced to participate in. Some have claimed that these ads are taxpayer funded, though the claim remains unconfirmed. It is known that one ad partner – the Colorado Consumer Health Initiative – has received taxpayer funds designated for a purpose other than the ad.

Even if this disturbing ad is not taxpayer funded, the American people should be getting an ever clearer picture of how ObamaCare can be used as a way to funnel money to President Obama’s pro-abortion buddies. As usual, Planned Parenthood is a prime example, as they have been paid to sign citizens up for ObamaCare. Many average Americans will be forced to pay for others’ abortions. And effort after effort is made to keep full transparency from the American public.

The only question left is this: when will the outrage stop?