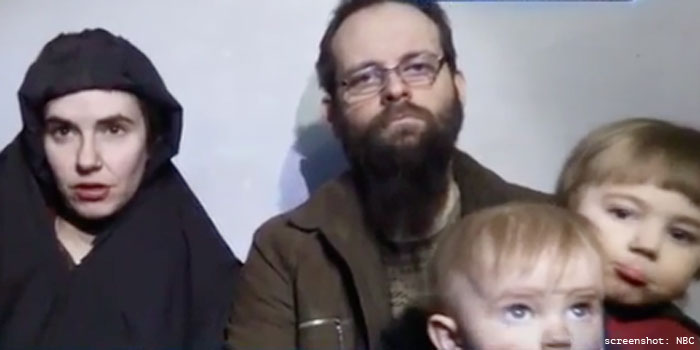 This month, a North American family held captive by the Taliban for five years was safely returned to Canada.

Caitlan Coleman, who is American, her Canadian husband, and their three children were released on October 11. Many questions remain about the circumstances of their captivity and the events that led to their freedom.

Much of the media coverage has focused on questions of international politics, but there is also the family’s personal account. In her first sit-down interview since escaping captivity, Coleman revealed to the Toronto Star the desperate circumstances in which she birthed her three living children while held hostage by the Taliban.  She also revealed that she and her husband had another daughter, whom she was forced to abort.

According to the Star, Coleman and her husband, Joshua Boyle, were kidnapped in 2012 while hiking in Afghanistan.  Coleman was pregnant with their first child at the time. The family was held by the Taliban-linked Haqqani network for five years, during which time their second son and a daughter were born.  In the interview last week, Coleman confirmed details which were hinted at in their letters to family and videos released by the terror network. Coleman said she was forced to abort their daughter, whom the couple named Martyr. In a previous interview following their release, Boyle confirmed that his daughter was murdered and his wife was raped, but he did not elaborate. Coleman said the forced abortion came after her husband refused to join the Haqqani network, and the family saw the tragic death of their daughter as retaliation.

According to Coleman, their captors forced her to abort Martyr by tainting her food.  She explained, “They were very angry because Joshua had been asked to join them, to work for them, and he said no. They killed her by dosing the food. They put massive doses of estrogen in the food.” After Martyr’s death, the captors bragged about how they had killed the baby.  According to the Star, the Taliban issued a statement refuting Coleman’s account.

Coleman and Boyle were so concerned about the safety of their children that they hid the subsequent pregnancies, and Boyle delivered the babies in secret. When Coleman sat for the interview, all three children were undergoing treatment at Ottawa’s Children’s Hospital of East Ontario as they adjust from the harsh life of captivity to freedom.

Coleman’s account of the death of her daughter, Martyr, is a reminder of the coercive violence of abortion that is a reality for many women. While abortion supporters claim abortion liberates and empowers women, the violent death of a child is a devastating tool of enslavement and control.

Other terror networks have forced women to abort their babies, and forced abortion is common in human trafficking. Dr. Laura Lederer, president of the non-profit Global Centurion and author of the study, “The Health Consequences of Sex Trafficking and Their Implications for Identifying Victims in Healthcare Facilities,” found that 55 percent of women surveyed who were victims of human trafficking had at least one abortion, and 30 percent had multiple abortions while in captivity. Sadly, Planned Parenthood, America’s most profitable abortion provider (which claims to care about women’s health and rights) has been caught on tape, willing to aid and abet sex traffickers instead of truly helping victims:

Other women are not directly enslaved but are forced to abort their children at the hands of their abusers. Timothy Smith sexually abused his stepdaughter for years before she became pregnant at 13. Instead of reporting the suspicious situation, Planned Parenthood performed an abortion and sent the young girl back to her abuser, no questions asked. Along with its willingness to aid sex traffickers, Planned Parenthood was caught in an undercover Live Action sting operation showing several Planned Parenthood centers’ willingness to cover up the sexual abuse of minors: