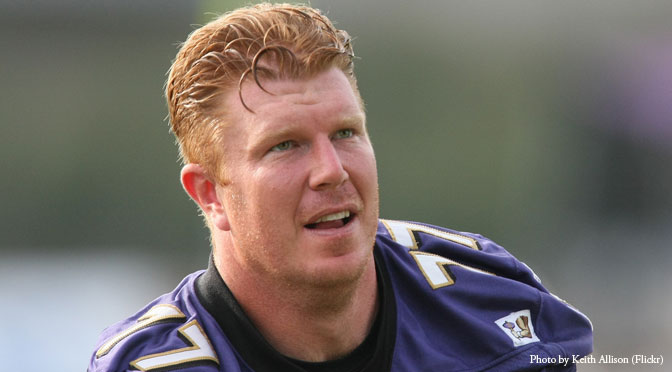 According to a March For Life press release, retired NFL star and pro-life champion Matt Birk will speak at the upcoming March for Life Rally on the National Mall and keynote the 34th Annual Rose Dinner on January 22, 2016.

Birk played 15 seasons in the NFL with the Minnesota Vikings and Baltimore Ravens. A six-time Pro Bowl selection, Birk finished his illustrious career with a win in Super Bowl XLVII over the San Francisco 49ers.

Birk and his wife, Adrianna, are both actively involved in the pro-life movement, including with their local pregnancy center and in pro-life marches. Following the Ravens’ Super Bowl Victory in 2013, Birk declined to attend the customary White House Super Bowl meeting with President Obama, due to the President’s outspoken support for abortion and Planned Parenthood. According to NFL.com, Birk explained his absence from the celebration:

I wasn’t there. I would say this, I would say that I have great respect for the office of the presidency, but about five or six weeks ago, our president made a comment in a speech and he said, ‘God bless Planned Parenthood.’

Planned Parenthood performs about 330,000 abortions a year. I am Catholic, I am active in the pro-life movement and I just felt like I couldn’t deal with that. I couldn’t endorse that in any way.

In addition to his work as a pro-life activist, Birk is the founder of the HIKE Foundation, whose goal is “to provide at-risk children with the educational opportunities needed to excel in the classroom and in life.” For his work with at-risk youth, as well as his success on the football field, Birk was the recipient of the 2011 Walter Payton Man of the Year Award.