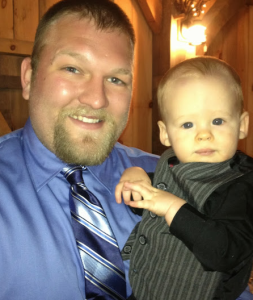 Brad Baumgarten with his godson, whose middle name is Danger. Literally!

Brad Baumgarten works as a LIFEChoice intern with the Coalition for Life in St. Louis, MO.  Also, he serves as a sidewalk counselor every week near the Planned Parenthood of St. Louis, the last abortion-performing facility in Missouri.  During college he co-founded the Students for Life group of Lindenwood University.

How have you been active in the pro-life movement?

For me, it started in college as I grew into my faith.  I became more convicted of the Catholic Church’s stance on life, and I knew I had to make a positive difference. After attending the SFLA conference and the March for Life while in college, I discovered more about the unethical practices of Planned Parenthood and the abortion industry. Returning to Lindenwood University, I met up with friends to start a pro-life student group on Lindenwood’s campus. It began with only two or three people and has since then grown to about 30 people. I served as the group’s president until I graduated in 2012. 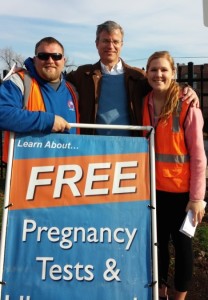 We’ve done a number of things. We chalked the entire campus with beautiful pro-life messages (one message that caused a lot of stir on campus was “3,500 beating hearts stopped today due to abortion”). We were able to get pregnancy resource brochures on campus, but not without having to constantly argue with campus health services.

I began sidewalk-counseling last summer with Coalition for Life, and since then I have helped at least ninety-four women choose life.

Who is your pro-life hero or role model?

Abby Johnson, for sure. After reading her book Unplanned, I appreciated the importance of the grace of God, overtly displayed in her conversion to Christ and the pro-life side. I also really admire Scott Klusendorf, especially his pro-life apologetics and his SLED acronym. Both aspects are a must in the fight for life: changing hearts and convicting minds.

What makes a great leader?

The sign of good leadership is the ability to get an even better leader to take charge of one’s team and responsibilities. I learned this when I transferred leadership of Lindenwood Students for Life to my friend Lisa in the fall of 2013. She has grown the group and has gotten them even more involved in pro-life activism.

What brings you the most joy in your pro-life work? 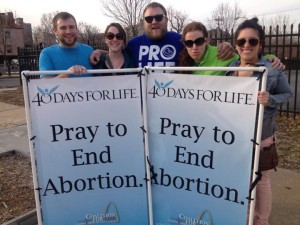 Sidewalk-counseling and praying right at Planned Parenthood’s door are awesome. Letting the Holy Spirit work and speak through me is such an amazing experience. I have really enjoyed getting expectant mothers to visit Thrive’s mobile medical center for a free check-up and pregnancy test, instead of going to Planned Parenthood.

What is your biggest concern about the pro-life movement? What should we do about it? 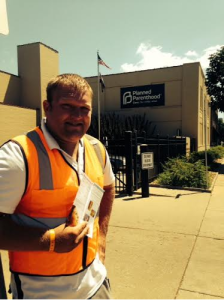 Pro-lifers need to be concerned about the popular image of angry pro-lifers.  We have to put that stereotype to rest. We’ve got to show abortion-minded mothers that we truly care about their situation. By stopping any hateful speech and proving how much we care, we can prove the accusations of pro-choicers wrong. Be more caring. Show concern for both the baby and the mother. We pro-lifers need to help the mother first in order to help the baby.

How do you reason that both men and women can engage in the abortion conversation despite it being portrayed as a “women’s issue”?

It takes two to tango. Women need men, and men need women to reproduce. The guy is as much a part of the baby-making process as the mother. The popular idea of the abortion and pro-life debate is wrong; it’s not a war on women, but rather a war on the family. Men should be protectors and lead women into choosing life.

What are some ways for students to be actively pro-life during school breaks?

Pray! Pray outside abortion facilities, on the sidewalks. If abortion-minded people see young folk their own age advocating for children in the womb, they are more likely to change their minds. I have seen that happen. People seeing the youth fighting abortion are intrigued and will ask questions, which can lead to a turnaround. That has been my experience! 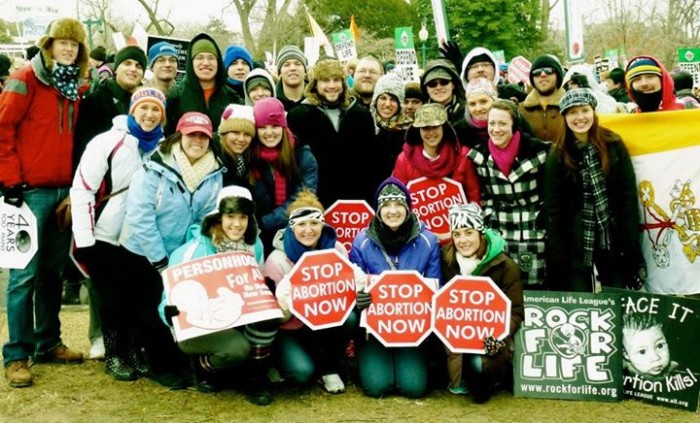 Lindenwood University, Newman Center students gather with Brad at the 2013 March for Life.