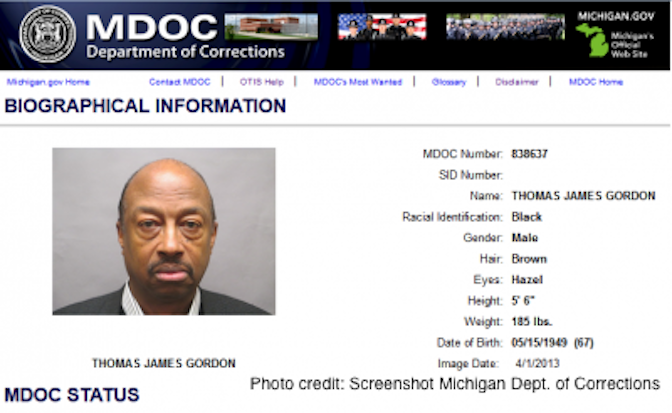 A Michigan abortionist may be facing possible sanctions after violating state law through his failure to notify the state about several arrests and criminal convictions. Thomas James Gordon performs abortions at Heritage Clinic for Women, a Grand Rapids National Abortion Federation clinic which has failed to publicly distance themselves from Gordon despite Live Action News documenting his criminal history in January. Now, the state’s medical licensing board has filed a formal complaint against Gordon for failing to notify them of the convictions. According to a search of Michigan Corporations, Gordon is the Registered Agent for the Heritage Clinic for Women abortion clinic. His offenses included “Weapons – Firearms – Possession Under the Influence” among other offenses. In addition, Gordon has history of domestic violence against his wife which is convening for female patients under his care. WZZM13, a local Grand Rapids news outlet, has reported that Gordon’s failure to report the arrests and convictions could affect his ability to practice:

Documents we obtained show state experts are concerned the doctor’s past criminal cases could affect his ability to practice in a “safe and competent manner.

Pro-life researcher Lynn Mills spoke with Live Action News about the case and said that local activists who regularly pray and counsel outside Gordon’s abortion facility began noticing his absences in January and became suspicious. She provided a copy of the complaint filed by the Michigan Department of Licensing and Regulatory Affairs against Gordon in early March for failing to notify the state within 30 days of a criminal conviction. According to the complaint, Gordon failed to report the following criminal convictions to the state as required by law:

April of 1992 – Convicted of “Aggravated Assault” (suspended sentence – 90 days in jail a fine and 18 months probation). April of 2012 – Convicted of “Weapons-Firearms-Possession Under The Influence” and “Domestic Violence” (four days in jail and 18 months probation). May of 2015 – Convicted of “Disorderly Person Jostling” (suspended sentence of 90 days in jail contingent on successful one year probation and fines).

December of 2015 – Convicted of “Operating While Intoxicated” (probation of six months and ordered to pay costs and fines). Even more disturbing, WZZM13 dug into Gordon’s violent history further and discovered that he had allegedly threatened his wife with a pistol. They reported that, “In 2010, Gordon’s wife Shelly filed a Personal Protection Order against him. She wrote quote: ‘Thomas has beat (me) several times in the past 3 years, he has even put his 45 mm pistol to my head when I was sleeping.’

A copy of PPO provided to Live Action News by local activists shows that while on a trip to Jamaica, Gordon’s wife alleges that a “layover and wrong transport made him snap.” She describes his anger against her and the hotel front desk clerk. She claims that Gordon came back to the room where she was already asleep and “started hitting me in face, body said he doesn’t like me – hit me and damage my nose…” Shelly Gordon writes that she defended herself and told Gordon he had a problem. She accused him of “probably beat[ing] his first wife,” adding that she had filed for divorce.

A copy of a Kent County Sheriff Department Affidavit of Probable Cause dated November 6, 2011, and provided to Live Action News, paints a picture of how unstable and violent this Michigan abortionist is:

Suspect Thomas Gordon, did commit a felonious assault upon his wife, Shelly Gordon. The Gordons were involved in a verbal argument, in the finished basement of their residence. Thomas had a Kimber Combat Carry, semi auto pistol, chambered in .45 ACP, resting on the counter of a kitchenette area. The victim, Shelly Gordon, stated that she was going to go upstairs. Thomas stated “I’ll shoot you and anyone that fucks with me.” He then ran over to the counter top, picked up the pistol, racked the slide and pointed it at Shelly. Shelly then grabbed hold of the pistol and Thomas’ hand. She stated “you are not going to shoot me,” as she tried to pry the pistol from his grasp. They continued the physical struggle and Thomas fell against the wall and then on to the floor. Shelly was able to grab the gun and run upstairs. She secreted the gun under a pillow, on the upstairs couch. Shelly then ran outside and hid, where she called 911. Thomas did submit to a breathalyzer, upon arrival at the jail. This yielded the BAC results of .21. It should be noted that the magazine for the pistol, although loaded with six rounds, was not in the grip of the pistol. Shelly stated that she believed the firearm was loaded.

The affidavit also states that the abortionist told police officers called to the scene of the incident that he is a doctor who makes $1,000,000 per year and “drinks alcohol every day.”

Despite his violent history, the Heritage Clinic for Women‘s website describes Gordon as possessing, “a strong sense of dedication, professionalism and integrity.” Live Action News called Heritage Clinic for Women and has verified that Gordon is still performing abortions at the center. A June 2, 2016, search of “abortion providers” listed at the NAF website reveals that the National Abortion Federation continues to refer to Heritage despite Gordon’s criminal record.

In an effort to persuade authorities to take immediate action against Gordon’s ability to practice medicine, local pro-lifers have set up an online petition asking the Michigan Department of Licensing and Regulatory Affairs (LARA) to act quickly to summarily suspend Gordon’s license. They are also asking pro-lifers to call Shelly Egerton, the Director of Licensing and Regulatory Affairs for the state, as well as Michigan Attorney General Bill Schuette to voice their concern. The petition along with additional contact information can be found here.

According to WZZM13, Gordon has until June 6 to respond to the complaint filed against him by the state.