The Guttmacher Institute is the latest abortion advocacy organization to face a “racial reckoning” by former staff members who claim that the organization’s D.C. office nurtured a “toxic workplace… inhospitable to caretakers, women of color, and disabled people.” Staffers singled out Guttmacher’s current VP for public policy, Heather Boonstra, telling Prism author Tina Vásquez that their concerns were met with “incredulity, hostility, and insults” and her response was just one among many “incidences of racism, microaggression, and disparate treatment by supervisors and managers in the Public Policy Division.” 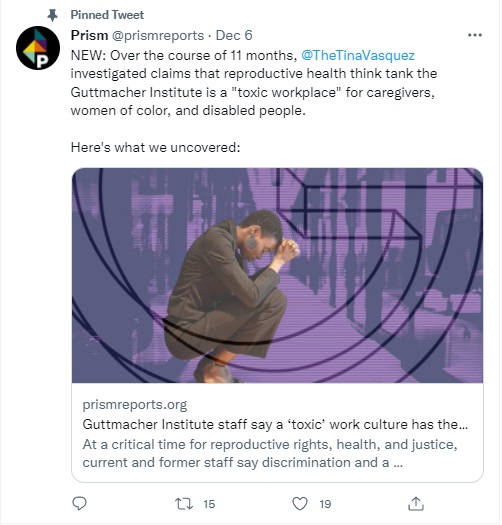 These allegations by Guttmacher staffers and Prism have not been independently confirmed by Live Action News.

Last year, staffers from Planned Parenthood, NARAL, NOW and others went public to expose systemic racism within those organizations. And in past years, abortion advocacy organizations including Guttmacher faced allegations of failing to properly address sexual abuse allegations.

In a lengthy piece, Prism claims to have spoken to “11 Guttmacher employees,” including “six from the Washington, D.C., public policy team with whom Prism conducted interviews and maintained contact for the course of one year.” Prism claims several staffers used pseudonyms “for fear of retaliation.”

“News of the organization’s reported turmoil isn’t entirely a surprise for those who’ve been paying attention,” Vásquez wrote. “There have been social media posts and negative online reviews from former employees. Internally, workers say they have used every tool at their disposal—exit interviews, surveys, formal complaints, and even whistleblower reports to the board—in an effort to get Guttmacher management to address ‘systemic problems.'”

Public allegations continued even after the publication of Prism’s allegations.

One former Guttmacher staffer tweeted, “I left this org in 2010 for many of the reasons stated. I feel vindicated and sad that nothing ever changed. I was called ‘self-serving’ by an old white woman superior for calling out racism in my exit memo.” 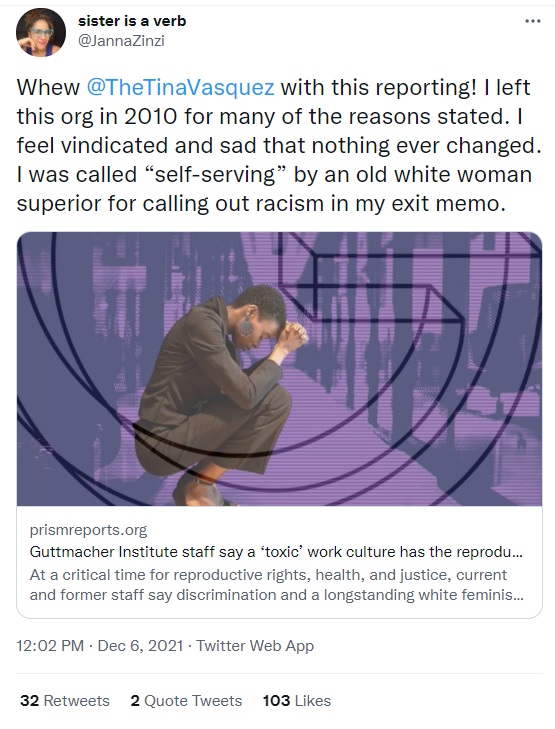 She later tweeted, “Beyond the G*tt, I left repro health, rights & justice because of a broken heart & for my mental health.”

Another former staffer claimed to be “mildly traumatized” by their experiences at Guttmacher. 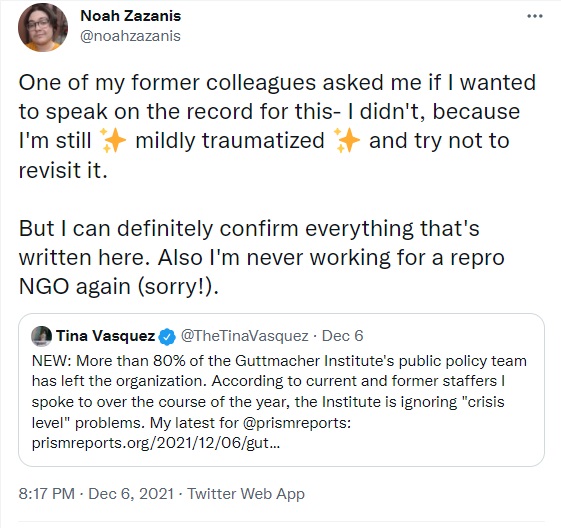 “As someone who had worked with Guttmacher TONS over several years, this comes as no surprise. Many of my friends—some of who served on the policy team previously—always shared stories of workplace abuse, tokenization, and harm. This is upsetting and more must be done,” read another tweet.

“None of this is surprising, but it’s still shocking,” a former staffer tweeted.

According to Vásquez, Guttmacher staffers alleged “a pattern of tokenizing or pushing out staff of color (if they’re hired at all), retaliating against employees who raise equity and justice issues, verbally abusing staff, and systematically failing to meaningfully engage with reproductive justice organizations whose work centers Black women.”

Vásquez claims staffers of color felt “token efforts” were put in place regarding training on “racial equity and microaggressions.”

According to her report, when staff members wanted to focus on “workplace problems” and they suggested Guttmacher “put supportive policies in place for Black staff and other employees of color,” their suggestions were met with a “chilly reception.”

The allegations bled onto Glassdoor where an alleged staffer wrote, “Leadership has wholly abandoned the commitments it made to address white supremacy in the organization and harm against staff of color. Racist, discriminatory managers are protected even as their staff are forced out.”

“The culture is toxic for staff who are disabled, queer, pregnant, caregivers, or in any way have human needs that interfere with being productivity robots. The organization does not live the values it preaches,” the staffer also claimed. 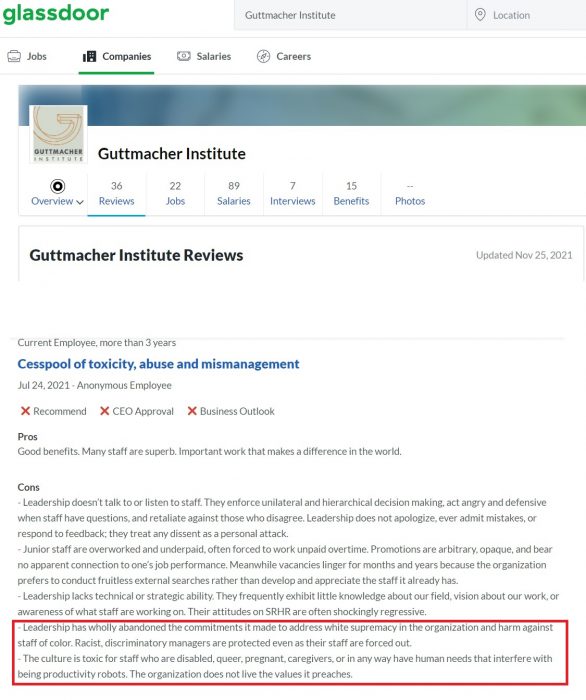 According to Vásquez, that assessment found that some members of senior management “are not held to the same expectations” as other staff and that “white women’s self-expression seems to be accommodated more than other groups’ transgressions in incidents involving conflict.”

“In the racial equity assessment, one employee was quoted as saying that they only heard of staffers of color being ‘yelled at’ and that there was no example of a white person yelling at another white person at Guttmacher,” Vásquez wrote.

Vásquez alleged that multiple workers experienced “a sort of quiet retaliation and ostracization [after speaking out] that ma[de] it impossible to do their jobs.”

The racial equity assessment confirmed their “experiences were widespread,” Vásquez claimed. The assessment also allegedly expressed “a great deal of concern about the risk of providing candid feedback, and the prospect of retribution for critique,” she wrote.

According to Vásquez, “all seven current and former staff who spoke to Prism alleged Boonstra made a practice of retaliating against people who spoke up about issues by pushing them out of the organization with poor job performance reviews.”

“Leadership doesn’t listen to us. They retaliate against us if they see us as a threat to their ill-informed decisions, and even when it directly impacts our health and safety,” alleged a former staffer.

Prism also cited a September 2021 Glassdoor review which claimed, “glaring issues with leadership are ignored” and that “at least eight of the 12 members of the policy division were ‘fired, pushed out, or quit as a direct result of poor management decisions.'”

Lack of diversity in management

The racial assessment “characterized Guttmacher as an organization that is ‘predominately white and based in white dominant culture,’” Vásquez claimed.

According to Vásquez, “the highest ranking D.C. employees are white women who have been with the organization for decades.”

Staffers saw this as a “bias in hiring that was especially troubling given the disproportionate impact of abortion policy on Black and Latinx communities,” Vásquez wrote.

One Guttmacher staffer said she found the “lack of people of color in management and on staff telling, but sadly common for a reproductive rights organization.”

Consultants who assessed Guttmacher found that the organization “was founded and continues to be led by a white feminist ethos” which has developed a culture “reflective of dominant culture norms (i.e., white supremacy, patriarchy),” Prism claimed.

According to Prism, “over the last 11 months, more than 80% of Guttmacher’s D.C. public policy division has left, including every caregiver and the only two staffers of color.”

“The federal team of the policy division no longer exists, according to employees who’ve been tracking these departures closely,” the article added.

“The state [policy] team is hanging on by a thread,” according to one Guttmacher employee, Vásquez claimed. 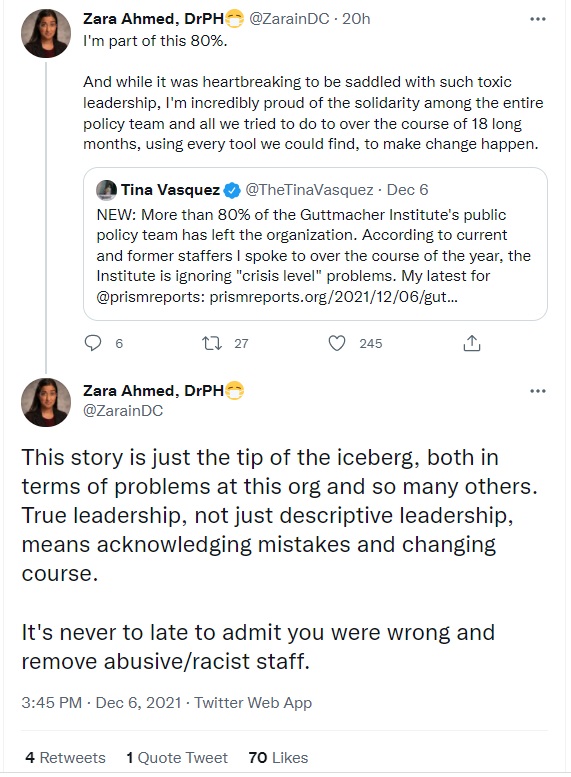 “To address the discord on the public policy team, Guttmacher brought in human resources consultants in December 2020 to facilitate a retreat and determine whether the team was ‘cohesive,’ she claimed.

According to the article, Prism reviewed the report, which “showed that the policy team scored Guttmacher alarmingly low for accountability, commitment, trust, and its ability to address conflict.”

The article prompted one abortion advocate to ask on Twitter, “[T]he bulk of our data about repro issues comes from Guttmacher. [H]ow much of what we know is infected by their racism?” 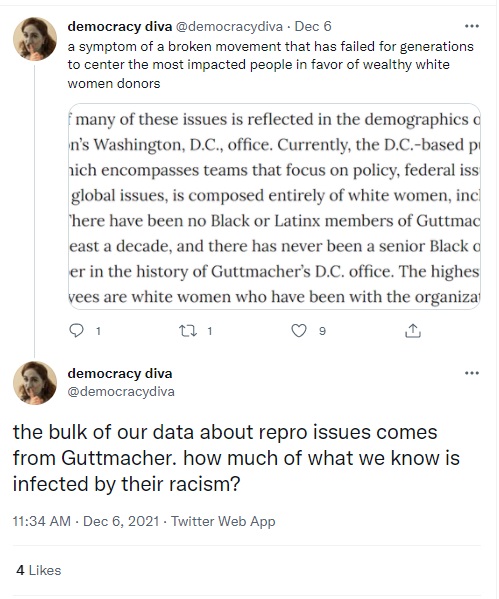 In response, former NARAL board member Renee Bracey Sherman tweeted, “Our movement will never be able to abolish abortion bans until we address the racism within our ranks.” 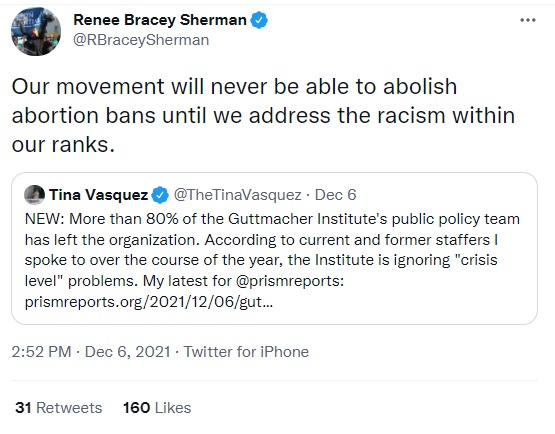 Prism included a statement from Guttmacher denying the charges as unsubstantiated. “Complaints were duly investigated, and nothing raised to the level of abuse or discrimination,” the statement claimed.

Guttmacher described the turmoil as an organization grappling with “our own history of outdated systems and cultural norm” at a “historically white organization.”