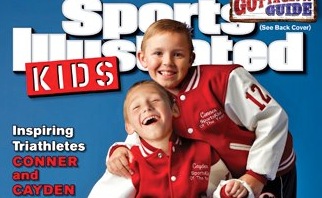 “That doctor pretty much told us, you know, ‘Your son is going to be a burden on your family; put him in a home.'” 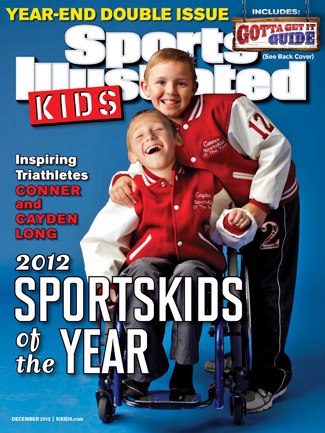 The year-end double-issue of Sports Illustrated Kids features an amazing pair of brothers: Connor and Cayden Long. The Long boys – only nine and six years old – race in triathlons together. They’ve been named the 2012 SportsKids of the year, and when you hear their story, it’s clear that they deserve the honor.

The Long brothers aren’t your average pair of boys. Connor, mature well beyond his young age, wanted to find a way to include Cayden in his life. Cayden has cerebral palsy and can’t walk or talk.

Sports Illustrated Kids explains how Connor and Cayden race together:

A year and a half ago, he and Cayden started participating in triathlons together. Conner swims while pulling Cayden in a raft, bikes with his little brother towed behind him in a trailer, and pushes that trailer when they run. Over the past 18 months, the pair from White House, Tennessee, traveled up and down the East coast to compete in races. Seeing the brothers working together has inspired onlookers, while bringing Conner and Cayden closer than ever. Their amazing determination and spirit is why the Long brothers are the 2012 Sports Illustrated Kids SportsKids of the Year.

The triathlons were Connor’s idea, and in videos he clearly explains that his brother has regular feelings just like anyone else. He wants to encourage people to be careful what they say in front of people with disabilities, and he’s showing the world how people like Cayden deserve to be treated.

Connor also has taken this opportunity to tell stories about Cayden that show everyone exactly how human, normal, and valuable Cayden is.

Many see Conner as a hero, but he doesn’t quite understand the hype. For him, these races are just a chance for him and his little brother to have some fun. ‘When we went out for the first race this season,’ Conner says, ‘Cayden [had a look on his face] like ‘I’m so happy to be back out here, I can’t believe we had to wait this long!’

And Cayden definitely has fun. He smiles and giggles throughout races. He’s even become a bit of a prankster. ‘We were warming up for a race once, and Cayden was really interested in this bright-colored van across the street,’ says Gildersleeve. ‘He started to wheel himself towards it, so I said “Cayden, please stop.” Instead he just started going faster. I thought I was going to have a heart attack! Right before he got to the curb, he stopped his chair. He turned around and looked at me with this huge smile and started laughing. He knew exactly what he was doing.’

While Connor is undoubtedly an incredible nine-year-old, his parents are also incredible. When Cayden was only four months old, they received his diagnosis from a doctor who gave horrible advice. Thankfully, the Longs rejected the advice and willingly kept Cayden as the valuable son that he is. In the video below, Cayden’s dad shares:

Every year in the United States, babies are aborted simply because they have disabilities. Babies known to have Down syndrome are aborted more often than not – as often as 90 percent of the time, according to some studies. Babies with spina bifida, Trisomy-18, and other disabilities are often targeted for abortion as well.

What’s more, doctors can be hugely incorrect as they give parents dismal predictions concerning what their children will or won’t be able to do. Cayden Long’s doctor was wrong. Titus Steng’s doctor was wrong. Bella Santorum has also defied the usual prognosis of Trisomy-18 with the length of her life. Again and again, these amazing children and others like them prove the medical community wrong. They prove wrong those people who say children with disabilities would be better off aborted and never born.

Cayden Long and the many children like him show the world that every life truly is worth living. And Connor Long bravely demonstrates that it’s up to us to highlight the beauty of these people who can’t speak for themselves.

You can watch more about the Long family’s story here. ESPN highlighted Connor, Cayden, and their parents in a ten-minute segment for “E:60,” a weekly show. (You may recall this story from 2012 that “E:60” aired about a father who originally wanted to abort his daughter who had Down syndrome.)